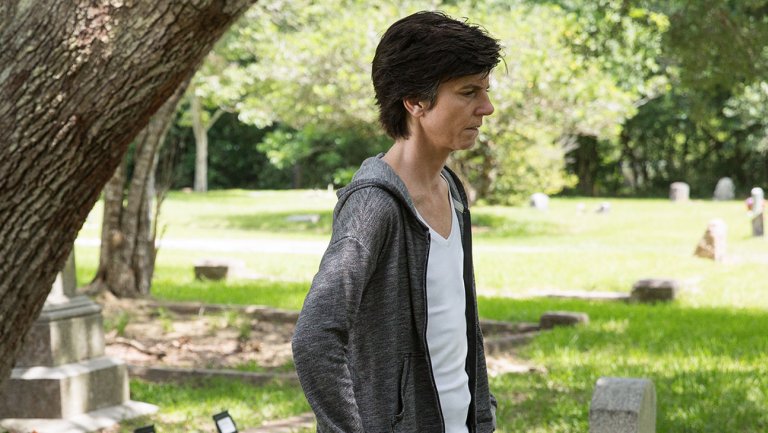 ‘One Mississippi’ is a semi-autobiographical American comedy TV series created by Tig Notaro and Diablo Cody. This series airs on Amazon and first premiered on November 5, 2015.

If you are able to not take yourself too seriously, then you can deal with anything life throws your way, or at least that is what ‘One Mississippi’ tries to convey. In this tragicomedy starring Tig herself, we see her return to her hometown after her mother’s sudden death. It is a little too much for Tig, to deal with the loss of someone who not only loved but truly understood her, while also dealing with her own declining health problems. Throw in a clingy girlfriend and a dysfunctional family into the mix, and you have a comedy that is so miserable that it is wonderful.

Critics have duly praised ‘One Mississippi’ saying that it “proves an honest vehicle for its moving dramatic narrative, observational comedy, and the genuine acting skills of its lead, Tig Notaro”.

One Mississippi Cast: Who is in it?

The cast of ‘One Mississippi’ is led by Tig Notaro who plays the central character, Tig Bavaro. Remy, played by Noah Harpster, is Tig’s brother on the show. He too, like his sister, is gay and has a budding relationship with Vicky, who is a civil war re-enactor. Another critical role on the show is that of Bill’s, played by John Rothman, who on the show is Tig’s stepfather. Other cast members include Rya Kihlstedt as Caroline, Casey Wilson as Brooke and Stephanie Allynne as Kate.

One Mississippi Plot: What is it about?

‘One Mississippi’ is reflection on the creator Tig Notaro’s life and tells us about what she claims to have been the worst year of her life. Tig, who is a cancer survivor, is forced to return to her home in Mississippi as she learns that her mother, Caroline, has been taken off life support. After the demise of her mother, she sticks around but is haunted by bad memories. Tig confronts the issues she has been suppressing and also tries to maintain and manage a long distance relationship with her girlfriend.

Over the two seasons, it is shown to the viewers what Tig has to do to heal, whether emotionally or physically and how she must go back to her past and reconnect with her roots to move forward.

Since the work is semi-autobiographical, the laughter does not seem forced in this show. Rather it seems to come organically without being pushed to the front and center. After all, it is hard to turn a terrible year where one endures a “fatal bout of C diff, the unexpected death of her mother, the end of a relationship, and a breast cancer diagnosis” into stuff for a comedy show. However, what Tig does, is turn it into very tender content with genuine instances of warmth. While some parts of the show do bear resemblance to Tig’s life, the comedian has stated that other aspects have been added just to further the story towards laughs. For example, her on-screen socially awkward stepfather is a far cry from her real-life stepfather.

To sum up, ‘One Mississippi’ strikes a delightfully sensible balance between happy and sad moments and shows how to draw out the true meaning from the mundane. However, the series itself is anything but mundane. The Guardian best sums it up, saying, “the themes it deals with are as big as they get. But the way they’re dealt with – all shot through with Notaro’s detached worldview – is beautifully small and human. It takes time to linger over details that other shows wouldn’t. ‘One Mississippi’ is a wonderful, tender show. Just don’t expect your sides to split.”

One Mississippi Season 3 Release Date: Will it happen?

‘One Mississippi’ Season 2 premiered on September 8, 2017. In 2018, Amazon called off the show. The canceling of the show angered quite a few fans, especially the ones who belonged to the LGBT community. The show was axed off in its prime, leaving the viewers quite upset. It was withdrawn at a time where the world was intent on proving that it cares for women and their safety; a topic that is close to many viewers.

The cancellation of the TV series brought about a movement among fans and even top critics, which led to even #SaveOneMississippi trend on Twitter. This was one of the ways for the fans to unite and display their understandable disappointment, hoping it would propel the makers to revive the series. But till now it hasn’t. If by any chance, the show is revived, we will make sure that we update this section with ‘One Mississippi’ Season 3 release date.

While we wait for any positive news on ‘One Mississippi’ Season 3, check out the season 2 trailer to refresh your memories. If you haven’t seen the show yet, head over to Amazon Prime to catch all the episodes of the previous seasons.