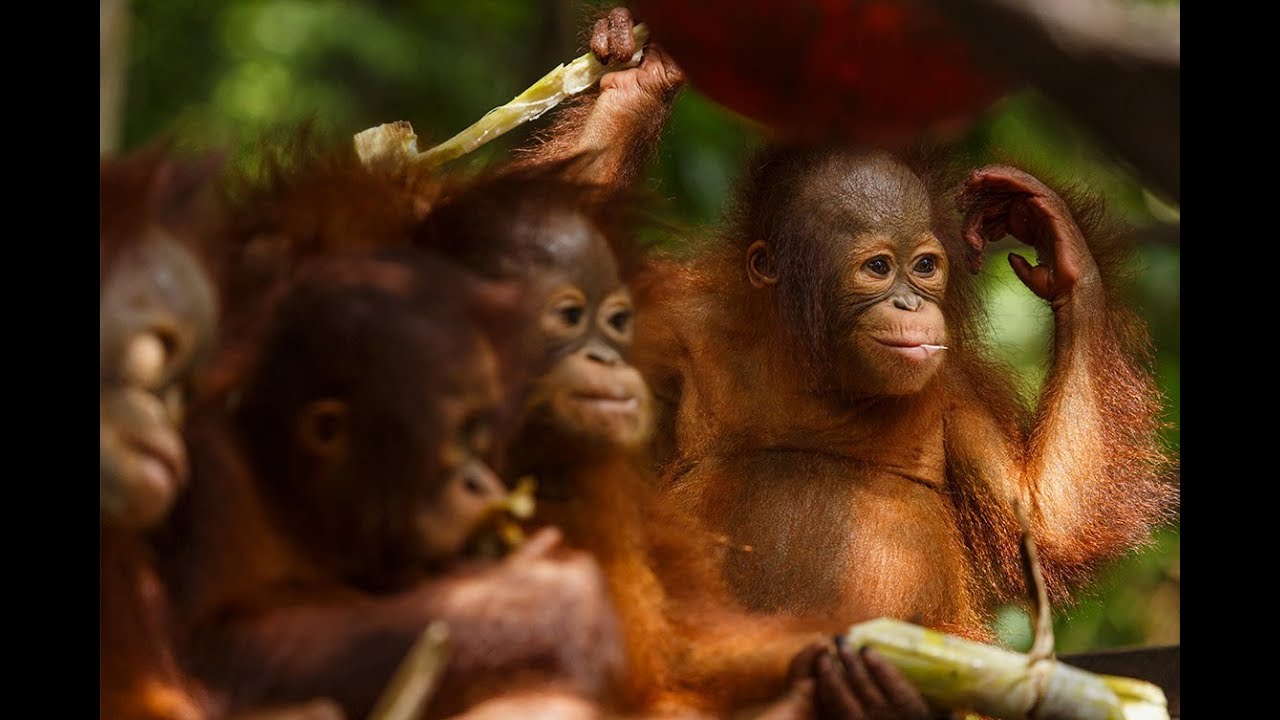 One of the most fascinating species from the ape family, orangutans, are found only in the rainforests of Borneo and Sumatra in Indonesia, Malaysia, and Brunei. Reddish-brown in color, these primates have a gentle temperament and  are quite intelligent. With almost 97% similarity to humans in terms of DNA composition, they are our closest ancestors. Sadly though, the Bornean orangutans are facing the threat of extinction, especially due to the destruction of their habitats, plantation agriculture, deforestation, and illegal wildlife trade hunting. In 2016, the International Union for Conservation of Nature declared Borneo’s orangutans as critically endangered. As per statistics, their numbers have decreased by nearly 65% from the 1970s.

However, amidst all the negativity, the world got to see a ray of hope when the story of a rare albino orangutan made headlines across all leading tabloids in 2017. After being rescued from captivity, she was released back into the wild. Alba was rescued at the age of five years as an underweight orangutan, suffering from stress, dehydration, a parasite infection, and multiple other diseases. She was kept for rehabilitation at the Nyaru Menteng Orangutan Rehabilitation Center, which is run by the Borneo Orangutan Survival Foundation. After she was strong enough and learned the required climbing and socialization skills, the caretakers decided that she was ready to go back home.

Smithsonian wildlife docuseries, ‘Orangutan Jungle School’ gives a detailed insight into how the Borneo Orangutan Survival Foundation (BOSF) helps young, orphaned orangutans to acquire natural skills. It documents those animals who have lost their mothers to illegal activities such as poaching and deforestation and narrates how they learn the necessary abilities to survive in the wild. BOSF was established in 1191 and it is an Indonesian non-profit organization that works relentlessly toward conserving the Bornean orangutan and its habitat. One of their activities is to run educational facilities that aid in the rehabilitation of these orphaned primates.

Orangutan Jungle School Cast: Who is in it?

Of course, the stars in this nature documentary are the adorable baby orangutans, who are taught natural survival skills by their human teachers. Among them, we meet the playful Cinta, energetic Jumbo, sweet Meryl, active Jelapat, and brave Topan, to name a few. Joining them is a team of dedicated, caring instructors who guide these young primates through learning the wilder ways of life.

Orangutan Jungle School Plot: What is it about?

‘Orangutan Jungle School’ lends us a first-hand look into one of the most unusual educational institutes in a Borneo forest in Central Kalimantan, Indonesia. Emotional, full of drama, and packed with mischief, this docu-series is about some very special students — young, endangered orangutans. In the show, we witness how classes are conducted in the Nyaru Menteng school, run by the Borneo Orangutan Survival Foundation. Here, baby, orphaned apes, whose mothers were killed due to poaching and deforestation, are taught the necessary skills required to survive in the wild. There are even passing and grade levels, with the only exception being the venue, which is a jungle rather than a classroom.

The docuseries is highly engaging since it lets us witness these unique characters as they engage in funny antics, tear-jerking moments, and surprising cliffhangers. We also see how committed human caregivers give their best to enable these intelligent animals to have a chance at survival.

On one of the episodes, we meet the exceptionally comic Valentino, who discovers new shortcuts to tackle his lessons. We even see Darril and Liti, the class couple, with Darril being the controlling boyfriend. Additionally, Clara, who has recently graduated, has to find a way to retrieve her baby, Clarita, kidnapped by a dominant male. After Clarita is brought back to her mom, everyone wonders if she accepts her back or not. In another episode, Valentino, Madara, and Utris move up a level in their class and join their new classmates. Meanwhile, two-year-old Mema arrives in nursery school, only to realize that she does not like termites. Again, the staff readies themselves to release some of the fresh graduates into the wild.

Filled with moments such as friendship, romance, bullying, dangerous situations, drama, young hormones, fear, anger, medical emergencies, escapes, and heartbreaks, ‘Orangutan Jungle School’ is a wonderful series. As we witness emotional moments like rescues, reunions, and even teenage pregnancy, we get to see how these primates get ready to preserve the future of their species.

Orangutan Jungle School Season 2 Release Date: When will it premiere?

As far as the next season goes, we don’t have an official announcement yet. Though considering how adorable the show is, we would definitely like to see another season. If renewed, ‘Orangutan Jungle School’ season 2 can release sometime in August, 2020. We will update this section as soon as we hear more.

Below is the official trailer for season 1 of the show. You can check out the clip to get a glimpse of the show.