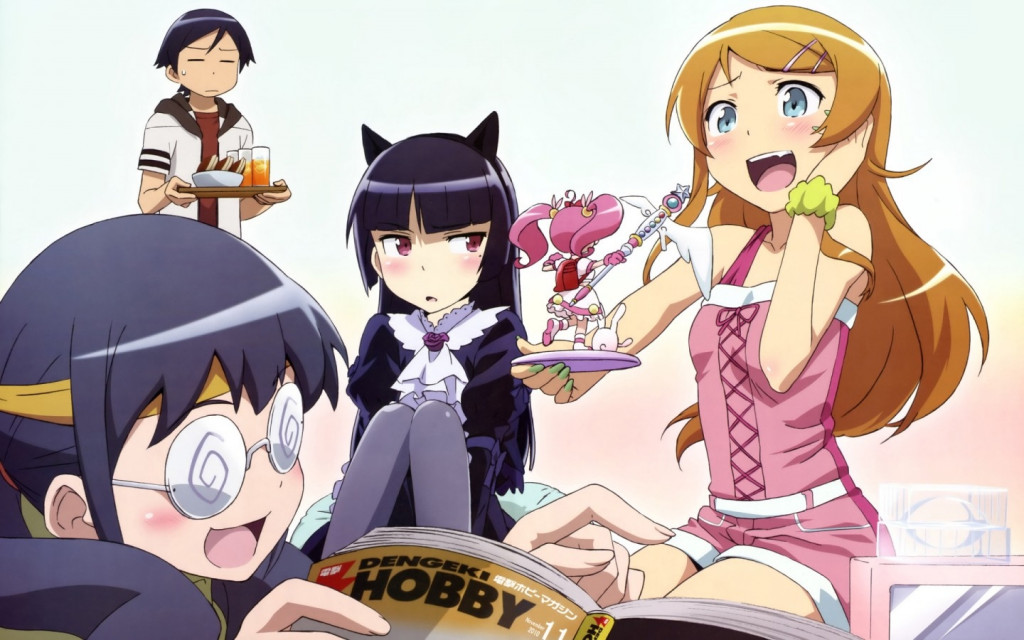 ‘Oreimo’, also known in Japan as ‘Ore no Imōto’, is short for ‘Ore no Imōto ga Konna ni Kawaii Wake ga Nai’, which literally translates to ‘My Little Sister Can’t Be This Cute’ in English. It is a series of light novels written by famed Japanese light novel author Tsukasa Fushimi. Fushimi is also known for his work on ‘Eromanga Sensei’, another light novel that he is currently working on, wherein some of the characters from ‘Oreimo’ make a guest appearance.

The artwork for ‘Oreimo’ is done by Hiro Kanzaki, who is also working with Fushimi on the ‘Eromanga Sensei’ series. It is evident that the two of them have a history of working together and their coordination and collaboration can be felt throughout the course of the series. The first edition was published on August 10 2008 and continued till June 7, 2013, producing a total of 12 light novels during that time. The series is quite well received by fans, both outside and inside Japan. The first nine volumes managed to sell a total of 3.7 million copies worldwide, according to some estimates published by Anime News Network.

A manga adaptation by Sakura Ikeda began circulation on the popular magazine by ASCII Media Works, called ‘Dengeki G’s Magazine’ in 2009. A total of 4 tankōbon were released between the 27th of October, 2009 and the 27th of April, 2011 with the third volume being a special collector’s edition. It contained a small figurine of Ayase Aragaki, the protagonist of the series, along with the actual comic. Though a regular version is also available that does not contain the figurine, sales reports show that the special edition was way more successful than the regular one.

The anime adaptation was announced and produced by AIC, much to the delight of the fan-base. It is extremely important for an anime like ‘Oreimo’ to be adapted for the television screens and the producers acknowledged this fact. They set out to find the appropriate talents, finally deciding on Hiroyuki Kanbe as the director and Hideyuki Kurata as the screenplay director. A total of 12 episodes aired in Japan between the 3rd of October and the 19th of December, 2010, which were later compiled into eight boxset collections.

In addition to the original anime series, four other specially created episodes were released digitally on their official website. These extra web episodes come bundled with the 7th and the 8th volume of the collection. These are considered to be a separate story-arc as they provide an alternate ending to the original anime. Aniplex of America announced that they will be simulcasting the series through their Anime News Network channel but it was put on hold due to security issues arising from the leak of the second episode. The first episode was successfully broadcasted in North America and Japan but fans had to wait till the 8th of November, 2010 for the subsequent episodes. The series, however, did run for its entirety without any further security issues. The entire first season is available in a DVD boxset collection containing Japanese audio and English subtitles.

Following the popularity of the first season, a second season was announced, titled ‘Ore no Imōto ga Konna ni Kawaii Wake ga Nai’. It is produced by A-1 pictures and was simultaneously cast in North America by Crunchyroll between the 7th of April and the 30th of June, 2013. Despite being produced by a different company, most of the original cast members were retained from the first season in order to maintain the legitimacy of the characters. A total of 13 episodes were produced along with 3 additional special episodes for this season. The special episodes were broadcast on the 9th of August, 2013 at Otakon with a universal release following shortly on August 18.

Oreimo Season 3 Release Date: When Will it Premiere?

‘Oreimo’ season 2 released on April 7, 2013 and ended its 13-episode run June 30, 2013. A Season 3 for ‘Oreimo’ seems pretty much out of question presently since the anime has caught up with the original source material and no new plans for the revival of the series have been revealed till date. It seems we are not going to receive a new season of the anime as long as the original source material is not being expanded upon by Fushimi. Since both Fushimi and Hiro Kanzaki are currently busy with ‘Eromanga Sensei’, a reboot of the light novel seems pretty far-fetched. However, the characters are all there and the fans are quite hyped for it, so we can never write it off completely. Our best guess is that in the unlikely scenario of the anime getting renewed, ‘Oreimo’ season 3 release date could be sometime in 2021 or 2022. We will update this section as soon as we hear more.

The anime is licensed by Aniplex of America in North America and can presently be streamed online on Crunchyroll. A collector’s edition boxset has also been released, which contains all the episodes in original Japanese audio with English subtitles.

The entire plot of ‘Oreimo’ revolves around the lives of Kyosuke Kosaka and Kirino Kosaka, two apparently normal siblings living together in Chiba. Staying true to the nature of siblings, they both do not get along well with each other and can frequently be found fighting over petty issues. Kyosuke can only remember them being indifferent towards one another, hardly caring for each other’s actions. However, things soon take a turn for the better when one day, Kyosuke accidentally finds the cover of a ‘magical girl’ anime at the entrance of their house. Upon further investigation, he discovers that an eroge has been hidden inside the case, leading to him speculating that the case must belong to his sister. He proceeds to confront Kirino, after which she confesses.

Kirino brings Kyosuke to her room later that night, revealing her entire collection of erotic anime and video games. She also reveals that she is quite obsessed with the ‘little sister’ genre but cannot explain how she developed the passion for it. Quite taken aback at first but understanding the mind of a fourteen year old, he decides to help her get through her obsession. Kirino makes him promise that he will keep the collection a secret from their parents and asks him to play through one of the games in order to understand the concept. She wants him to help her get through her confusion and perhaps playing one of the games might help. Both of them strive to cope up with their everyday lives in addition to maintaining their new found confidence in each other, gradually bringing them closer in the process.