In the next few days, the picture will become clear on who the critics favor. At this point of time, considering ‘Spotlight’ has already got such great reviews and the fact that it is a movie that shows journalists in good light, don’t be surprised if it ends up winning the most number of critics awards. Two other movies that you should keep an eye on are ‘Mad Max: Fury Road’ and ‘Carol’. Both the movies should fare really well with the critics. ‘Brooklyn’ should fare very well with the Guilds. The early reactions to ‘The Revenant’ and ‘Joy’ have arrived, but they are still not decisive one way or the other on how the films will fare at the Oscars. 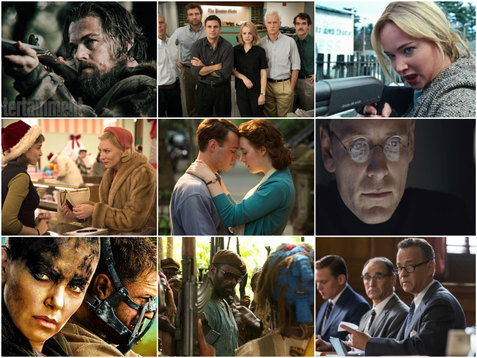 Insight: Alejandro González Iñárritu’s ‘The Revenant’ has been seen by few critics and the general feedback has been that even though it is very well made, it could be a little too gruesome for the Academy to universally love. David O Russell’s ‘Joy’ has been seen too, and the feedback hasn’t been very enthusiastic — though we will hold on to a final call on the film once more people have seen it. That leaves us with our default frontrunner: ‘Spotlight’.  ‘The Martian’ has surprisingly been making a lot of noise among few Oscar pundits, but I still feel that Academy members won’t be too enthusiastic about a science-fiction film which doesn’t break any new grounds — the way ‘Gravity’ did. The only reason that ‘The Martian’ has caught on some heat is because of the fact that it is an easily likeable film and more importantly, people have been awaiting Ridley Scott to make a come back after a string of failures. So, take its early frontrunner status with a pinch of salt.

Insight: Ridley Scott has never won a Best Directing Oscar (even though, ‘The Gladiator’ won Best Picture). So, this might be his year when he may finally win. But again, the whole ‘The Martian’ bubble may soon burst and with that Scott’s chances will also go downhill.  Iñárritu’s (and The Revenant’s) chances are of course hit because he won only this year for ‘Birdman’. So, that leaves us again with Thomas McCarthy, who at this point of time looks to be the default choice for winning Best Director.

Insight:  The feedback from those who have seen ‘The Revenant’ has been great on Leonardo Di Caprio’s performance. After years and years of doing phenomenal work — and being ignored by the Academy — it is finally looking like that he will win the deserved Oscar. Depp is starring in a film that won’t find much traction and therefore, his chances aren’t as great as it might seem on paper. The only semi-serious threat to Leo’s chances could be Matt Damon if ‘The Martian’ heat catches on. But, on the risk of repeating myself, I will say: chances of that happening are extremely slim.

Insight: 2015 without a shred of doubt has been the best year ever for women in films. And this is clearly reflecting in the above list of contenders. When was the last time Best Actress line-up of potential nominees looked stronger than Best Actor. Never, ever. Having said that, it is becoming more and more clear that this award is now for Brie Larson to lose. How things have changed since two years back when everyone thought she would get nominated for ‘Short Term 12’ she got snubbed by the Academy. This year, she is strongly placed to win it. Her only threat is Ronan who may trump Larson but only if Brooklyn gains some serious traction among Academy members. Lawrence could have won again had ‘Joy’ been the frontrunner to win Best Picture; but since it is not, she will have to be content with just a nomination.

Insight: It seems like Michael Keaton may not have to wait for long after he lost the Oscar last year to Eddie Redmayne. In my personal opinion, though, it is Mark Ruffalo who does the best work in ‘Spotlight’. His performance shouldn’t and won’t go unnoticed. Tom Hardy will surely get some spillover love for the continuous good work he has been doing. Due to some consistent drum-beating, Paul Dano is looking to break into top 5, but at this point of time, Sylvester Stallone is looking more firm with the popularity of ‘Creed’ growing with every passing day.

Insight: It is between Mara and Vikander. While Mara is more of a co-lead, Winslet and Vikander play the typical female-supporting-male roles but hold their own against the male leads in their respective films. ‘The Hateful Eight’ first reactions are indicating that Leigh will have a strong presence in the film, so she occupies the fourth spot. The final spot is open and could go to anyone, but I think the whole ‘Spotlight’ love will manifest into McAdams earning an unexpected fifth slot — not very different from how Jacky Weaver got into this category a couple of years back for ‘Silver Linings Playbook’.

Insight: Surprisingly a thin category this year. With ‘Spotlight’s’ stock rising, one can expect it to win this too. David O Russell has been looming over the Academy like a shadow since last four years without actually winning anything. Could this be his year ? Tarantino should also easily make into top 5 unless ‘The Hateful Eight’ turns out to be a disappointment. But then, Tarantino has yet to make a truly disappointing film.

Insight:  I strongly feel ‘Brooklyn’ will earn a lot of love from Academy members and that love will manifest somewhere — most likely, in this category. ‘Brooklyn’ could be this year’s ‘Whiplash’ — a Sundance hit that exceeded the expectations at the Oscars.