Our Cartoon President S03: Everything We Know 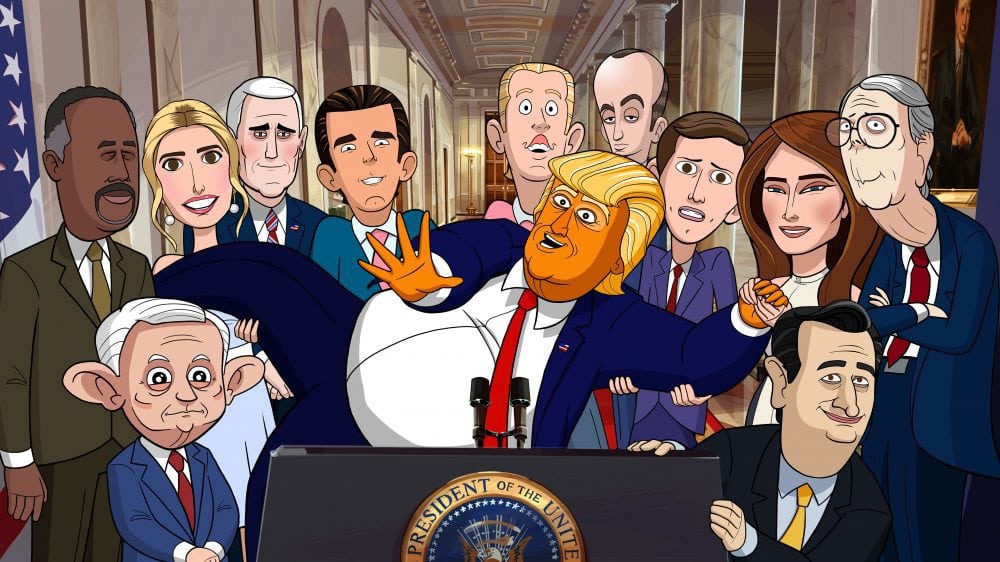 ‘Our Cartoon President’ is an American animated satire television series that airs on Showtime. It first premiered on February 11, 2018. The series has been created by Stephen Colbert, Chris Licht, Matt Lapin, Tim Luecke, and R. J. Fried. The series is based on a recurring segment which first appeared on the late-night talk show hosted by Colbert.

The show mostly seeks to parody President Trump, and key members of his administration. When the sketch was first started on Colbert’s show, it was meant to run for a short time, and most of the humor would come from Colbert’s interaction with this cartoon character. However, seeing how the audience took to the idea, Licht came up with the plan to make the series.

Naturally, the series has gone down well with audiences who have not been too pleased with the Trump administration. Needless to say, Trump’s supporters have not been amused by this show. Despite the divided public opinion, due to political biases, critics jumped in to point out that though the show managed to sugarcoat its satire and drive some of the scathing criticisms home, it ultimately felt drawn out, and lost its impact once viewers familiarized themselves with a couple of episodes.

After two successful seasons, will there be an Our Cartoon President season 3? Here’s everything we know.

Our Cartoon President Cast: Who is in it?

The cast of the two-dimensional animated show, ‘Our Cartoon President’, features the likes of Jeff Bergman as Donald Trump, Cody Lindquist as Melania Trump, William Sadler in the roles of John F. Kelly, Jess Sessions, and Mitch McConnell, Emily Lynne in the roles of Ivanka and Eric Trump, Nancy Pelosi, and Karen Pence, and James Adomian as the lead voice cast with some of them playing double, triple or even quadruple roles. Jeff Bergman has given an authentic feel to the character of Donald Trump with his voice which seems a lot like Trump in real life. The main cast is enriched by the presence of an extremely humorous supporting cast, which includes the likes of Colbert himself, who plays the role of God.

In season 3, all the main characters are expected to return, and we might even see new characters join the cast, with changes in the Trump administration. Some of the possible candidates for the upcoming election will also be seen in the show including the likes of Kamala Harris, Bernie Sanders, and Alexandria Ocasio-Cortez. Whatever the cast, they are sure to deliver top-notch political parodies and satires that will leave us in splits.

What is Our Cartoon President about?

The basic premise of ‘Our Cartoon President’ is an attempt to look beyond the doors of the White House, giving viewers access to Donald Trump’s presidency, which includes his policies and his interpersonal relationships with his family members and members of his administration. It is a fresh and cutting edge workplace comedy where we see a character study of some of the renowned figures of the Trump administration, as though they were being seen by a documentary crew.

The series does not shy away from resorting to news headlines, and going through the political propaganda spread in speeches, in order to come up with its brand of dark comedy. The show makes the leaders and characters seem like excellent parodies, though some detractors of their ideology would be hard pressed to point out, that these characters are parodies in real life as well. What stands out about the show is the source material, which is often derived from real policies and tweet storms of the President. Thus the show is not just funny, but politically aware as well, and the viewer will be better off knowing just how ridiculous some of the policies are, by watching the show.

The show does not hold back from mixing the elements of family comedy along with the established workplace comedic tones. However, for the talent involved in the show, it seems restrained somewhat, in its jokes, which could be much edgier and pointed, if they really wanted to go at the Trump administration.

In some ways, the show seems to be tailor-made for people who are more focused on mocking Trump and his aides, rather than trying to deal with the practical realities of the policies in play, or their impact in everyday life. In other words, it caters to an armchair liberal sentiment that delights in pointing out how everyone else is immoral and stupid but refuses to attack the systematic approach that gives these supposedly immoral and stupid people more validity and power.

Hopefully, in season 3, we will see the show become more pointed in its humor, and as there are more shows now lampooning the presidency and some of its more ridiculous aspects, ‘Our Cartoon President’ has its job cut out if it wants to be outstanding.

You can check out the trailer for ‘Our Cartoon President’ Season 3 below.