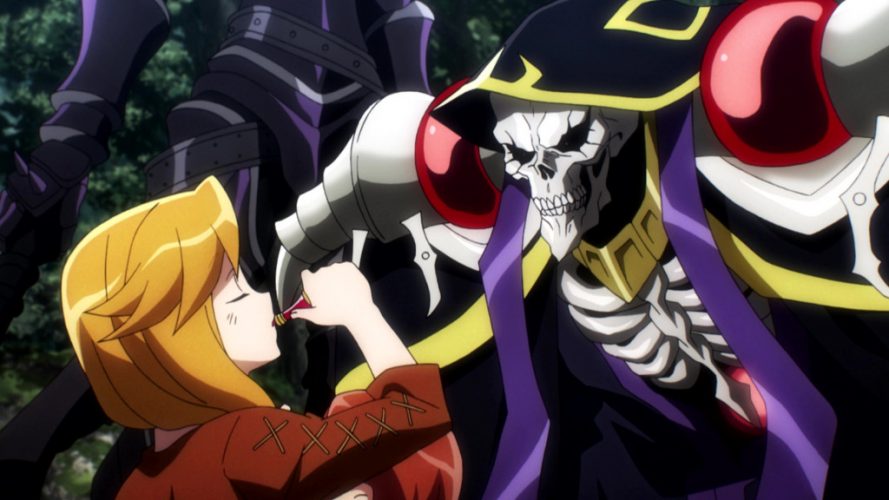 Overlord (also known as Ōbārōdo in Japanese) is a dark fantasy anime television series which is based on a light novel series of the same name. Written by Kugane Maruyama and illustrated by so-bin, the light novel series was first published on July 30, 2012. A couple of years later, in 2014, Satoshi Ōshio adapted the light novel series into a manga series with art from Hugin Miyama, much to the delight of fans of the novels.

A year after the manga adaptation was started, anime studio Madhouse announced plans to adapt Overlord into an anime television series, and Season 1 of the show premiered on July 7, 2015. It was an immediate hit among fans of the source material, and the show was renewed for a second season promptly. Meanwhile, two anime movies, titled Overlord: The Undead King and Overlord: The Dark Hero, were released in February and March 2017, respectively. Subsequently, Season 2 of the show premiered on January 9, 2018, and it was followed by the release of Season 3 on July 10, 2018. Since then, fans of the show have been waiting to hear news on a fourth season. Here’s everything we know about the prospects of Season 4 thus far.

Overlord Season 4 Release Date: When will it premiere?

Overlord season 3, titled Overlord III, premiered on July 10, 2018 and ran till October 2 of the same year. Since then, fans of the show have been waiting to hear news about Season 4, but alas, Season 4 has not been confirmed yet.

However, there’s no reason to get alarmed just yet. Firstly, it has been only a year since last season premiered. So, there’s plenty of time left. Secondly, both the light novel series and the manga series are still being published, so there’s no dearth of source material for a new season. Thirdly, Overlord has already seen three seasons, two original video animation (OVA) episodes, two anime movies, and one original net animation (ONA) parody series being released thus far, so there’s no doubt about its popularity, in Japan and overseas.

Considering all these factors, there’s a strong chance of the show being renewed for a fourth season. Our best guess is that Overlord season 4 release date could fall sometime in 2020 or 2021. However, we cannot say anything conclusively till an official announcement is made. We’re keeping our ears open for news on Season 4 of Overlord, and we’ll update this section as soon as we hear something reliable.

For those who like watching anime shows in English, the good news is that Overlord has a fantastic English dub which was made keeping the show’s international fanbase in mind. If you want to watch the show in English, you can find dubbed episodes on Funimation, Crunchyroll, and Hulu.

Like many anime shows, Overlord blurs the line between reality and virtual reality, and revolves around a virtual world which comes to life.

The show is set in the year 2126, a time of advanced technology and prosperity for humankind. In 2126, a Dive Massively Multiplayer Online Role Playing Game (DMMORPG) called Yggdrasil is released, and it quickly breaks new boundaries, becoming a game which allows unparalleled interactivity between users and the game world. Understandably, Yggdrasil soon becomes a sensation and draws in hundreds of thousands of gamers. The game has a brilliant run of 12 years at peak popularity, following which the developers decide to shut down the game servers.

In this backdrop, the show follows a character called Momonga, who heads a powerful guild called Ainz Ooal Gown in the game world. In its prime, the guild was the strongest in the game world and boasted 41 elite players as its members. However, as the game’s popularity began to fade, so did the prominence of Ainz Ooal Gown – at the time the servers are slated to be shut down, only four guild members remain. Prior to the shutting down of the game, Momonga invites the remaining guild members for one last foray into the game world, but only one heeds his call, stays a while, and leaves. Disheartened by the lack of interest shown by his guild members, Momonga decides to stay logged into the game till the time the servers are shut down.

When the servers are shut down, Momonga finds to his shock that the game has not vanished. Instead, he finds that Yggdrasil has been recreated as a reality of its own, and all the non playable characters (NPCs) in the game have sprung into life. Momonga, for his part, finds himself trapped in his game avatar, and is unable to use normal player functions such as in-game messaging and logging out options. After a brief period of panic, Momonga comes to terms with the fact that he is trapped in the game world, and embraces his new reality. With the aim of restoring Ainz Ooal Gown to its former glory, Momonga takes on the name Ainz Ooal Gown and begins exploring his new reality, while searching for clues which could reveal the mystery behind the real-life incarnation of the game.

Despite the show having dozens of characters, there are only two main characters. Below, we’ve provided you with brief backgrounds on each of these characters.

Momonga: The main protagonist of the show, Momonga is a veteran Yggdrasil player and the leader of the guild known as Ainz Ooal Gown. Further, Momonga is extremely powerful and is regarded as the best among the Almighty 41 Supreme Beings in the game. A cautious and stingy player, Momonga has a habit of planning everything down to the last detail, and hates unexpected hurdles in any of his activities. He is also shown to take no chances with enemies, and usually overkills them just to make sure that he doesn’t leave himself exposed by any mistakes. Despite his cunning, Momonga is shown to be loyal to his friends and his creations, and he displays a great degree of nobility once he becomes the Lord Ruler of Nazarick following the shut-down of the game servers.

Albedo: The other main character in the show, Albedo is the Overseer of the Floor Guardians of the Great Tomb of Nazarick, over which Momonga rules. An NPC brought to life in the aftermath of the game’s shutdown, Albedo ranks above all other NPCs in Nazarick and is an authority figure boasting tremendous power. However, she is also shown to be an extremely loyal subject and is also fiercely loyal when it comes to love. As the show progresses, it becomes increasingly clear that Albedo harbours strong romantic feelings towards Momonga, and she often lashes out at others out of jealousy when they get too close to Momonga. Interestingly, it’s later revealed that Momonga had a hand in her falling in love with him, as he had edited her character history when Yggdrasil was still a game.