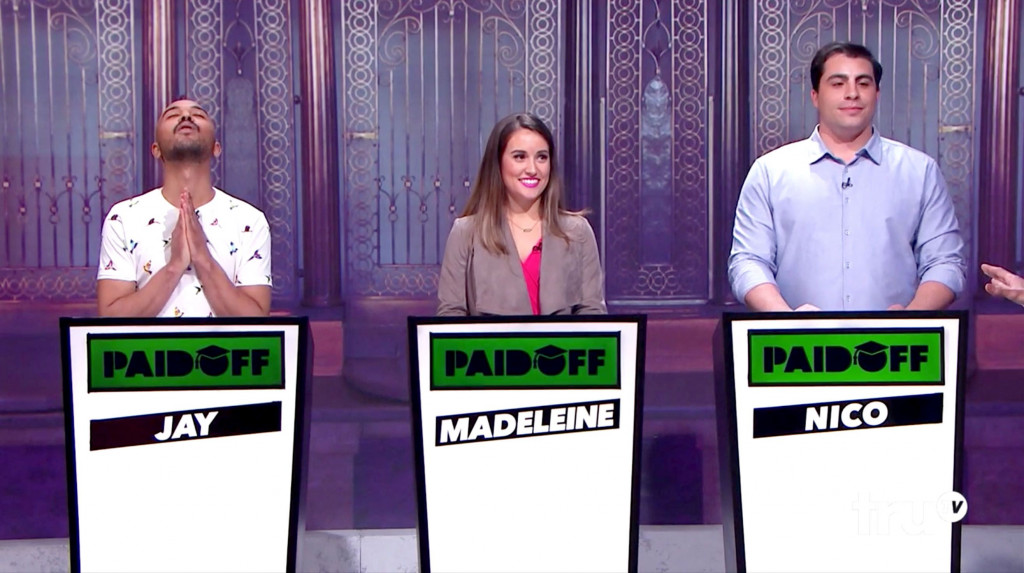 How many of you are stuck with a student loan? You did not think much right when you went to pursue that grueling curriculum for a coveted MBA or MS degree? You took a loan as well, thinking you would obtain a fat lump sum every month and paying it off in monthly installments would be easy-peasy! Darn, it hurts, does it not, when such dreams crash? And you are left with a sinking feeling when you see your bank balance on every 1st and you know that half of your salary will go in paying off that ill-fated loan. Neither can you avoid it; with the threat of your credit score going downhill and agents calling you incessantly. Ouch, that’s bad and equally sad. So, now, what if we tell you that there’s this rare opportunity to pay off your entire student loan in one go? Surprised? Read on.

‘Paid Off With Michael Torpey’ is a trivia game show, where three fortunate grads are tasked with exhibiting their degree knowledge in a fun, fast-paced environment. The final winner gets the option to have his or her debt cleared off! Co-created by Michael Torpey and Cowboy Bear Ninja and executive produced by Michael Melamedoff and Adrian Selkowitz, season 1 of the show premiered on truTV on July 10, 2018. The series returned on the platform on May 13, 2019.

Paid Off With Michael Torpey Cast: Who is in it?

‘Paid Off With Michael Torpey’ is hosted by actor and comedian Michael Torpey, widely recognized for his roles in ‘Orange Is the New Black‘, ‘VEEP‘, and ‘Inside Amy Schumer’. He has also frequently appeared on the show, ‘Late Night with Jimmy Fallon’.

Torpey himself did not have any student loan of his own. But he was inspired to create this program from his personal experience. His first acting gig, which was a national underwear ad campaign, fetched him quite some bucks. But he used this money to pay off his wife’s debt. This small incident gave him the idea to make this show. He wanted to develop something funny, which came with a positive impact. And thus, ‘Paid Off With Michael Torpey’ was born.

Paid Off With Michael Torpey Plot: What is it about?

The format of ‘Paid Off With Michael Torpey’ features three college graduates who participate in three, quite easy, trivia rounds. Each round leads to the lowest-scoring contestant leaving the show. Questions have no penalty points and every participant leaves with a few thousand dollars. The questions asked here can be anything — ranging from simple questions to guessing Family Feud-style survey responses. After all the rounds, the final winner gets the chance to have his entire debt cleared off. Season 2 offers more lucrative amounts and comprises an all-new live call-in game format for viewers to play from the comforts of their homes. In the Live Lightning Round, audience members can call in to answer questions and win up to $3,000 as prize money. The program is broadcasted in New York City. The highest prize money goes up to more than $1 million this season.

The main purpose of this show is to tackle the rising debt crisis in the United States. The program aims to build empathy, by trying to do something for people who are facing a tough time. As per Forbes, “The latest student loan debt statistics for 2019 show how serious the student loan debt crisis has become for borrowers across all demographics and age groups. There are more than 44 million borrowers who collectively owe $1.5 trillion in student loan debt in the U.S. alone.” Obviously, this is a grave situation, directly impacting the country’s economic state. And ‘Paid Off With Michael Torpey’ attempts to contribute a small amount toward solving this problem.

Paid Off With Michael Torpey Season 2 Release Date: When will it premiere?

‘Paid Off With Michael Torpey’ does adopt a fresh concept and is a unique game show in a genre dominated by reality TV programs which tempt participants with luxurious cars or exotic vacations. But this show adopts a more practical approach, attempting to tackle a grave economic crisis. Therefore, we are hopeful that it will be renewed for yet another season. And if that happens, our best guess is ‘Paid Off With Michael Torpey’ season 2 can release sometime later this year.

Paid Off With Michael Torpey Trailer

While we wait for season 2, check out the season 1 trailer below. If you haven’t seen the show yet head over to truTV to catch all the episodes of the previous season.