When Will Paradise PD Return to Netflix? 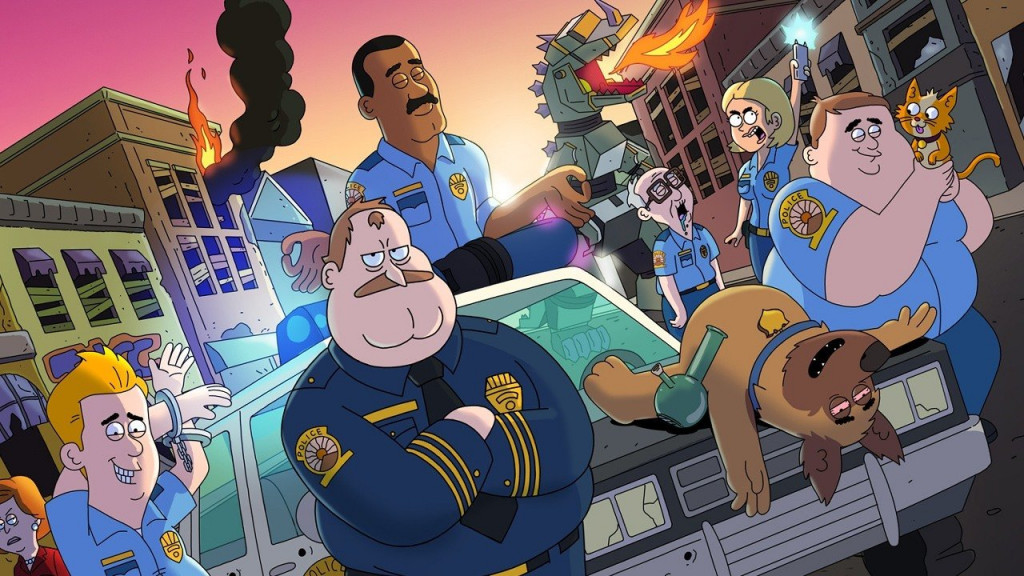 ‘Paradise PD’ is an American adult animation comedy series web series that airs on Netflix. The show first premiered in August 2018. It has been created by Waco O’Guin and Roger Black.

‘Paradise PD’ stands out in this regard, as a show which follows “a small-town police department. They’re bad cops. Not bad like no-nonsense. Not bad like cool. Bad like shitty”, as Deadline puts it. Naturally, the show did attract a lot of fans based on the quirky premise. However, the critics were not too happy with it, saying that the gags were not funny enough, and it was not really worth sitting through the unfunny bits to get to the few and rare funny parts.

But putting an end to all negativities, the series was renewed for another season. Find out when ‘Paradise PD’ season 2 releases on Netflix.

Paradise PD Season 2 Release Date: When will it premiere?

On October 30, 2018, Netflix officially decided to renew the show for another season. Despite the critic reviews being a little mixed, the streaming giant usually makes the decisions based on viewership data. And since the show got another season, it means that the initial season drew a fair number of viewers.

In February 2020, it was revealed that ‘Paradise PD’ season 2 will premiere on March 6, 2020. Although the renewal order comprises 20 new episodes, season 2 will have 10 episodes. This means that season 3 will also be hitting the streamer in the coming months!

Paradise PD Cast: Who is in it?

First of all, viewers need to understand that ‘Paradise PD’ is an animated series. Voice actors who may as well be your favorite stars have lent their voices to give life to the animated characters. In the show, we have Kyle Kinane as Bullet, the police dog who is addicted to the confiscated drugs that he is supposed to be guarding.

Grey Griffin appears as Mayor Karen Crawford, the mayor of Paradise. David Herman is seen in the role of Kevin Crawford, the new hire in the force, and slightly overweight. Kevin also happens to be the son of Chief Crawford. Tom Kenny plays Chief Randall Crawford, Kevin’s father and head of the police force.

Randall is shown to be a policeman who was once proud and fine. However, there was an incident where both his testicles got shot off. This eventually led him to become brittle and divorce his wife, the mayor, and he also has to put on testosterone patches in order to keep his masculinity in check.

Dana Synder appears as Stanley Hopson, an elderly homosexual officer who happens to be rather lewd and deviant. Snyder also plays Dusty Marlow, an obese officer with many cats at home. Cedric Yarbough appears as Gerald Fitzgerald, an officer with PTSD, and Sarah Chalke plays Gina Jabowski, a violent and psychotic officer, who also has a fat fetish which leads her to sexually harass Dusty several times.

There are also several supporting characters who lend the final touches to this astonishing and weird bunch. In the upcoming season, the main cast will return and they will be joined by new characters who will make the show funnier. We will add the names of the new additions as soon as we hear more.

Paradise PD Plot: What is it about?

The plot of ‘Paradise PD’ is basically about bad cops as we mentioned. They are not corrupt, or no-nonsense cops. They are simply underperforming cops who are not the first responders but are more along the lines of the worst responders.

The main story of ‘Paradise PD’, in the initial season, is that there is a police department in a small town around which the show revolves. Over the season, they have to perform various duties to protect and serve their community, but most importantly, they have to try and take down a meth kingpin and stop the argyle meth that has infiltrated their town.

The show does not hold back on the lewdness, and it establishes a kind of humor that is “violent, sophomoric, scatological”, not to mention heavy on inappropriate jokes regarding genitalia. The show is great at using humor as a blunt force without too much emotional attachment.

However, it must be said, that the show does not try to get too political and explore themes like abuse of power. It seems like it is out there to have fun and that is exactly what it does. A word must be said for both the animation and the voice acting which is beyond reproach and makes the show thoroughly enjoyable. The series is more in league with some of Adult Swim’s shows like ‘Rick and Morty‘ minus the philosophical ramifications of course.

Hopefully, the show will continue in a similar manner in season 2, and we will get to see more of the worst responders. It has to be said that this series marks a shift in Netflix’s aggressive push towards adult animation and their repository already includes shows like ‘Disenchantment‘, which viewers of this series might enjoy.

While we wait for the show to return to Netflix, you can check out this official clip from season 2 below: