When Does Pete The Cat Season 2 Episode 2 Premiere? 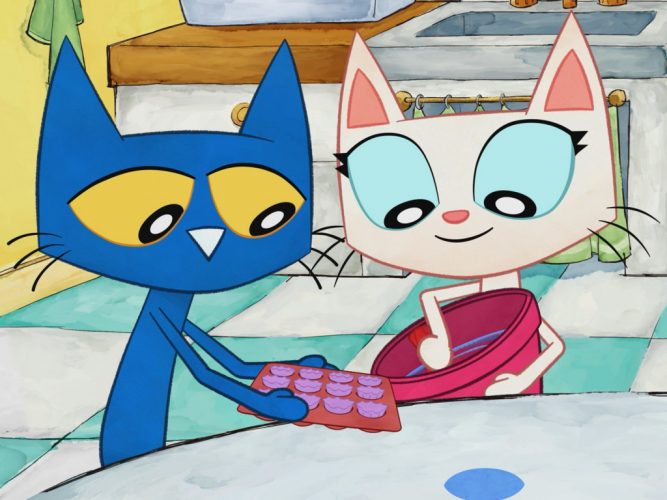 ‘Pete the Cat’ is a television series inspired by the work of James Dean who put his love for cats and his artistic abilities and created the character of his lovable goofy and easily relatable cat. James and his wife both left their corporate jobs and put all their time into creating children’s and adult books of the misadventures of Pete the cat which became insanely popular among the kids and their dream came true. His first book came out in 2006 which was followed up with two more books in 2008 and 2011. Today there are over 60 Pete the Cat books releasing every year!

The show, owing to the popularity of its original material, was an instant hit among fans. Its second season released in February 2020 with only one episode. Here’s when the second episode will release on Amazon Prime.

Pete the Cat Season 2 Cast: Who is in it?

The series has quite the star-studded cast with Jacob Tremblay of Room fame as Pete the Cat and musicians Diana Krall and Elvis Costello as his Mother and Father. ‘Pete the Cat’ features the original music from Costello and Krall who have won the prestigious Grammy award, which is available to stream via Amazon Music. Jessica Biel (‘The Illusionist’), Atticus Shaffer (‘The Middle’), and the internationally known musician KT Tunstall also star in the series.

The others who play several other characters are, Don Was as Neville, Alyson Stoner as Callie, Indie Nameth as Emma the Pug, Juliet Donenfeld as Sally Squirrel, Django Marsh as Bob, Evan Agos as Dennis, Phill Jupitus as Wilson the Owl, Felix Avitia as Gustavo Orintorrinco, Phil LaMarr as Burton Burrow, Jesse Tyler Ferguson as Syd, Dave Matthews as Papi, Jason Mraz as Leon, and Jim Parsons as Stan.

Pete The Cat Season 2 Plot: What is it About?

Based on the best-selling children’s book, ‘Pete the Cat’ is a fun, optimistic series that is musically driven and is about the day-to-day challenges that are personally relatable to the kids. It encourages them to try new things, be positive about life, it also talks about friendship and forming deep bonds with your friends. It stresses on good and healthy communication between kids and adults and also among the kids. The animation is great and easy on the eyes. It is not loud and does not aim just to get a laugh from the kids. The humor is more about understanding and getting a smile from the kids, unlike slapstick comedy which is all about the big laugh. The music is soothing, catchy, and entertaining. The kids love to sing along to it. It is one of the best shows out there for young kids as well as adults.

When asked Costello about his role in the series and what made it different from anything else that he had ever done before, he said,” I was particularly tickled by the idea that my wife and I would play these two characters. They gave us a little outline, and I loved that she was in a cat punk band. Pete plays the guitar, so there’s music through it. And of course, we’re not just singing, we’re also speaking. We saw one of the first episodes, and I found it really touching. More often than not, in live-action films, I’ve been a version of myself; or Man in Glasses or Man Who Wears Hat and Glasses, or another kind of nonspecific person. This is a complete transformation.”

The parents are the ones who are loving the show the most as it is a great show for their young kids and teaches them to develop their character strengths with meaningful storylines and catchy songs that keep the kids entertained while they also learn the important lessons that will help them in their day to day lives.

Check out the official trailer for season 2 right here.