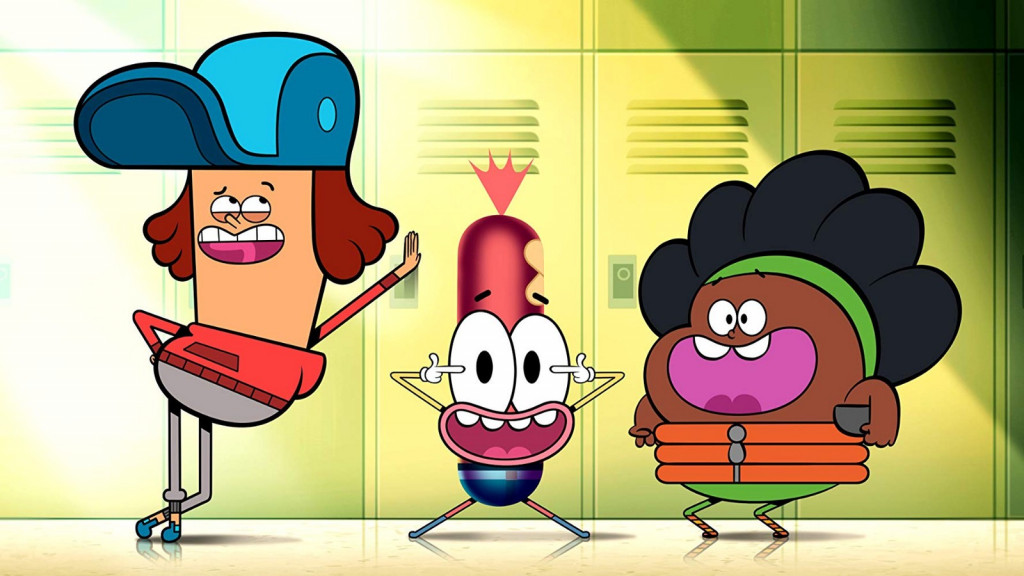 ‘Pinky Malinky’ is an animated web television that airs on Netflix and chronicles the adventure of the titular character, a 12-year-old middle school student who incidentally happens to be an anthropomorphic hot dog (yes, a hot dog).

The show, created by Chris Garbutt and Rikke Asbjørn, is based on an animated short film of the same name produced by Cartoon Network Studios Europe, which released way back in 2009. The ‘Pinky Malinky’ show was given the go ahead in 2015, but suffered several delays. Finally, it was announced that ‘Pinky Malinky’ would be hitting viewers’ screens on August 27, 2018, but even then, it failed to release on time. After a wait of a few more months, Season 1 of the show finally premiered on January 1, 2019, with 28 episodes.

Pinky Malinky Cast: Who’s in it?

Being an animated show, the cast of ‘Pinky Malinky’ consists primarily of voice actors. Lucas Grabeel voices the titular character Pinky Malinky, while Nathan Kress and Diamond White voice the characters of JJ Jameson and Babs Byuteman, respectively, who are Pinky’s human friends in school. Meanwhile, Danny Jacob and Retta voice Pinky’s parents, Mr. Malinky and Mrs. Malinky, respectively, making up the primary characters in the show. All the primary characters are expected make a return in next season of the show.

Pinky Malinky Plot: What is it about?

As mentioned earlier, ‘Pinky Malinky’ revolves around the adventures of the titular hot dog student as he tries to navigate life among humans. Set in a fictional town called Sackenhack, the show follows the adventures of Pinky and his human friends, JJ and Babs, as they try to solve the town’s problems with their positive attitudes and out-of-the-box thinking. Pinky, in particular, is portrayed as a walking, talking hot dog who is not just relentlessly optimistic, but is also driven by this desire to get other people to like him and his friends.

For instance, in the first episode of Season 1, we see Pinky and his friends come to the town’s aid after the townsfolk find that their favorite snack, Poppins, is being discontinued. Determined to keep the residents happy, Pinky, JJ, and Babs set out to replicate the recipe, so that the snack can still be produced. In yet another episode of Season 1, we see Pinky trying to find out why his social media posts have been receiving negative reactions. Pinky’s optimism, meanwhile, can be seen in other episodes, such as one in which he adopts a wild bobcat hoping for the best.

The show is half mocumentary, and half reality television, and will often show the characters, especially Pinky, breaking the fourth wall and addressing audiences directly. Each 12-minute episode of the show has a quick sketch of the main story at the beginning and the end, and despite being a show for kids, it is quite fast paced. Each episode of the show focuses on a central story and weaves a narrative around it so that it has real-life consequences for Pinky and co. and also a moral lesson for kids. That said, while the show is definitely aimed at younger audiences and is also comic, there is quite some amount of cartoon violence, so you might want to be wary of that before introducing your children to the program.

In terms of reception, the show has a mediocre rating of 5.6/10 on IMDb. However, considering that the show is meant for kids and consists of a walking, talking, hot dog, we cannot expect ratings to be off the charts.

Pinky Malinky Season 3 Release Date: When will it premiere?

Pinky Malinky Season 2 premiered on April 22, 2019. As far as the next season goes, we don’t have an official announcement yet. Though considering the it’s a popular animated show, we would be surprised if it doesn’t get another season. Animation shows have a big advantage in that the makers don’t have to depend on actors for their time. Another benefit is that once an infrastructure of the show is built, it is economical to make several shows rather than just one or two seasons.

The first two seasons came out within four months of each other, so our best guess is that if the show does get renewed, Pinky Malinky Season 3 can release sometime in September or October 2019. We will update this section as soon as we hear more.

While we wait for an update on season 3, check out the season 1 trailer to refresh your memories.  If you haven’t seen the show yet head over to Netflix to catch all the episodes of the previous seasons.