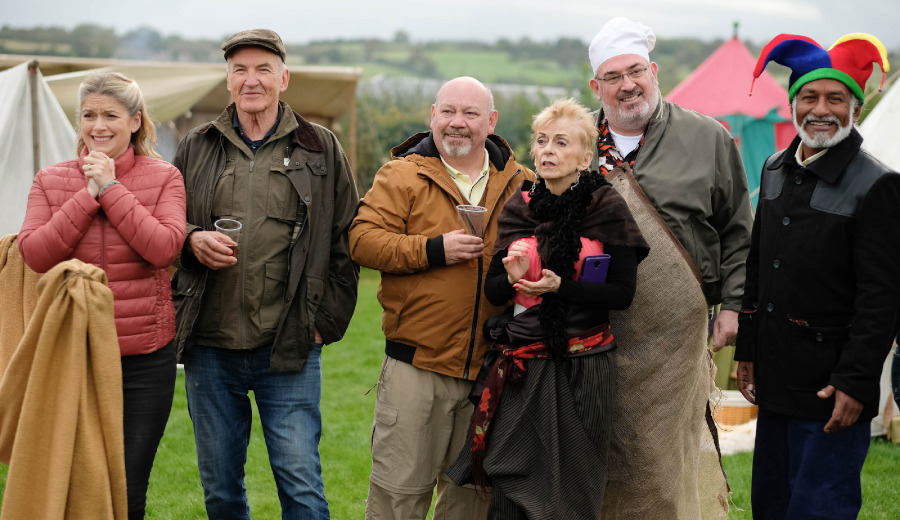 ‘Pitching In’ is a BBC comedy drama which centers around the life of a recent widower who runs a village resort like a caravan park on the coast of North Wales. The series is produced by the production house, LA Productions in association with Acorn Media Enterprises. Acorn distributes the show in areas outside BBC’s reach.

LA Productions’ Colin McKeown stressed on the important social issues addressed in the series, adding that ”Pitching In provides an audience with a lovely feeling of well-being and hopefully provides a warm smile”. Managing director of Acorn Media, Catherine Mackin also said, “With a stellar cast led by Larry Lamb and Hayley Mills, gorgeous setting, and highly enjoyable script, we know Acorn TV’s subscribers will enjoy this new series.”

Pitching In Cast: Who is in it?

The central character of the show, Frank, is portrayed by Larry Lamb. Lamb has appeared in shows like ‘EastEnders’ and ‘Gavin And Stacey’. Regarding the character of Frank, Lamb said, “Pitching In was a joy to be a part of. Frank is a lovely character trying his best in a difficult situation, and it was wonderful to be back in Wales to play this part. Although the North Wales coast was as far away as possible from Barry where we filmed Gavin and Stacey, the Welsh welcome was as warm as ever”, adding, “Eleven years after Gavin and Stacey burst onto the scene, I’m heading out west again, switching Barry Island for Anglesey this time! I’m delighted to be playing the role of Frank in Pitching In – it’s a touching, funny and romantic story and a fascinating glimpse of life on the north Wales coast.”

Kitty, the character who is best friends with Frank, is played by Melanie Walters. Walters is also someone whom we have seen in ‘Gavin And Stacy’. Melanie is loved by all. She is a straight and honest person who is very genuine with her feelings. Caroline Sheen, Garry Robson, Haley Mills, and Ifan Huw Dafydd are other important members of the cast.

Pitching In Plot: What is it about?

The plot of ‘Pitching In’ revolves around the character of Frank. He is the owner of a holiday caravan park and camping area in Wales. Frank’s wife has passed away recently and he is trying really hard to reconcile with the fact. The resort has been his home since the first time he moved in here with his wife. Frank has some help in the form of his daughter. She arrives at the park and suggests numerous ways in which her father could give a complete makeover to the resort and make it look cooler. This somewhat helps Frank get over his loss. The story of the series shows us the perspective of three different generations of a family, all of whom are trying to come to terms with a tragedy.

The show starts with the people living in and around the area throwing a surprise birthday party for Frank. And to celebrate his birthday, Frank’s daughter Carys and her son Dylan come over as well. We then get to see the various methods of adapting to the recent developments in running such a business, with Carys taking the reign in her own hands as Frank tries to come to terms with his loss.

Pitching In Season 2 Release Date: When Will it Premiere?

As far next season goes, we don’t have any official announcement yet. Season 1 received much criticism from fans after it was released in Wales, with people complaining about how a show that is set in northern Wales is crowded with actors from southern Wales. Even critics panned the series. Considering the public and expert opinion, it seems like the show has failed to connect with the audience and a ‘Pitching In’ season 2 looks highly unlikely. However, no concrete news has been released in this regard. We shall update this section as soon as some news comes our way.

Unfortunately, BBC did not release any trailer for season 1 of the show but you can find all the clips of the show here.