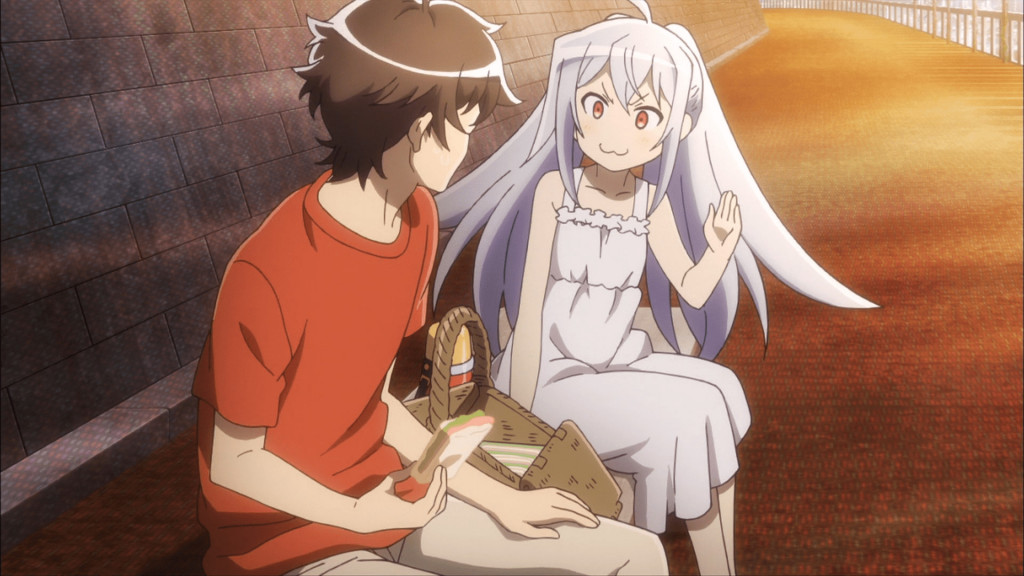 ‘Plastic Memories’, also known in Japan as ‘Purasutikku Memorīzu’, is an original Japanese anime series directed by Yoshiyuki Fujiwara and produced by Doga Kobo. Naotaka Hayashi wrote the storyline for the anime and also provided the screenplay for it. However, the characters are designed by famed Japanese illustrator Okiura.

Plastic Memories Season 2 Release Date: When will it premiere?

Plastic Memories season 1 premiered on April 5, 2015  and ended its run on June 28, 2015 after a total of 13 episodes. It is hard to tell whether a second season of the anime will ever see the light of day, mainly due to the fact that the first season is wholesome in itself. It manages to develop the characters efficiently while progressing through the storyline and it all juxtaposes to an extremely satisfying climax. This is the perfect example of a cour done right. Our best guess is that in the unlikely scenario of the anime getting renewed, Plastic Memories season 2 release date could be sometime in 2021. We will update this section as soon as learn more.

There are no English dubs available for the anime as of now. Aniplex of America released the box-set collection with English subs only, so we highly doubt an English dub will be released anytime soon. The entire first season with original Japanese audio and English subtitles can be found on Crunchyroll.

‘Plastic Memories’ takes place in a far away future where humans are not only living alongside androids but are highly dependent on them for their day-to-day activities. It is a time of peace and prosperity with each being, may it be of flesh or machine, finding their own place in society and striving to benefit it in one way or the other. Androids are mechanical constructs that are controlled by Artificial Intelligence but are similar to humans in every manner. They look the same, have their own needs and demands and even display emotions. They are also capable of falling in love and display the same level of affection as that of a human beings. In all essence, it is impossible to distinguish an android from a human if they do not express it themselves.

There are various models in the market, each trying to outdo the other in terms of similarity to the human race, which makes space for rapid development. It is during this time that SAI Corporations, one of the leading global manufacturers of androids, introduces their latest line of mechs called ‘Giftia’. These new models are almost carbon copies of humans and as a result, are immensely popular all over the world. However, there is a major drawback to owning a ‘Giftia’. These models have a predetermined lifespan after which they are very likely to malfunction and retaliate against their owners. Therefore, the lifespan of all Giftias are determined beforehand, after which they are reprogrammed. This reprogramming ensures that the models function as intended but also erases all the memories of the Giftia.

SAI Corp. has established Terminal Services, which is a completely new division targeted at reprogramming the Giftias that have passed their expiration date. A Giftia can become deadly if it passes its expiration date, since years of functioning degrades the internal circuits, causing memory loss, personality disintegration and violent outbursts of rage. The average lifespan of a Giftia is more or less 81,920 hours, which roughly translate to 9 years and 4 months. This is the maximum amount of time recommended by SAI Corp. and an android must absolutely be terminated before this hour.

The terminal service sends agents to the houses of the owners when their Giftias are nearing its end in order to retrieve the models. These agents always come in pairs and are generally referred to as ‘Spotters’ and ‘Marksmen’. The pair consists of one human agent known as the ‘Spotter’ working alongside his or her Giftia assigned by the organization known as ‘Marksmen’. Together, it is their duty to retrieve the aging Giftia back to headquarters in order to reprogram it.

However, this task can be really challenging as the owners and the Giftia get attached with one another, after having worked and stayed together for a long time. This can sometimes get out of hand as some owners refuse to give up their partners or decide to hide them from the terminal service, not realizing the implications of their actions. Slowly but surely, the assigned lifespan passes and they start to malfunction, going rogue and retaliating against their owners. This puts the general public in the vicinity in danger and the agents need to act fast in order to contain the damage.

The main storyline revolves around Tsukasa Mizugaki, an 18-year-old teenager who fails miserably in his college entrance exam due to medical conditions. Having accepted his fate, he decides to get a job in order to make the most out of his time. He also needs money to pay his bills and therefore asks his father to find him a job. His father manages to pull some strings and gets him a job at Terminal Service One as a spotter. Tsukasa joins work, even though he has no clue about the workings of the Terminal Service.

Tsukasa rushes to his office on the first day of joining to find out that he has been partnered with Isla, a Giftia that has been assigned personally to him. The duo proceeds to the training room where they are provided with basic training on how to retrieve an aging Giftia. Soon after the training session, they are given their first assignment wherein they are tasked with retrieving Nina, a child-type Giftia that is nearing her lifespan from her owner Chizu Shirohana.

Chizu has developed a soft corner for Nina and refuses to give her up. Isla tries to reason with her multiple times but fails miserably, leading to Tsukasa doubting her abilities. Nonetheless, the duo presses on explaining to the old lady the consequences of a rogue bot. She refuses to budge, at which point Isla proceeds to talk to Nina directly. Nina understands the implications of the situation and agrees to the duo taking her away. Chizu overhears this conversation and suddenly realizes her selfishness. She agrees with Tsukasa and Isla and allows them to take Nina away, albeit with a tear in her eye. She apologizes to Nina and confesses that she should have asked Nina about her opinions, at which point they both embrace each other.

Personally speaking, this is the sheer brilliance of the anime. Its ability to portray raw human emotions even through hollow tin metal bodies is staggering and leaves us wondering about the truth behind our own feelings. Tsukasa and Isla return to the headquarters where Nina is wired and reprogrammed. They are given further assignments which they fail to complete successfully, leading to Tsukasa again doubting Isla’s abilities. Even though the first job was simple and easy, Isla was unable to convince Chizu to give up her partner. Being a Giftia herself and a veteran in the organization, Tsukasa definitely expects a lot more from her.

However, since they failed the mission that they were given, they both get a major hearing from Michiru. Tsukasa proceeds to take the blame on him, knowing very well that the fault was Isla’s. He believes that Isla is going through some issues since she has been off the field for a while and decides to give her some space to recover. Isla remarks that she is only dragging him down with her due to her inability to perform at the highest level but Tsukasa wants to try harder. It is during this time that they decide that Tsukasa will handle all the interactions with the owners instead of Isla, despite this not being his lookout.

Isla constantly visits the physical unit testing room due to her condition when Yasutaka, a veteran at the firm, points out that the visits are pointless and the decline in her performance is not because of her abilities but because of her age. Her abilities will continue to decline consistently as this is one of the leading characteristics of a Giftia. Tsukasa, unaware of Isla’s age, is still in the dark about the implications of this fact and heads on to the unfinished mission along with Isla, determined to be successful this time.

The duo successfully completes their mission this time around and retrieves the bot safely back to the headquarters. They both proceed to their assigned room in the headquarters where they live together as mandated by the organization. This is where Tsukasa realizes that Isla is not speaking with him or interacting. In an attempt to connect with her, he asks her to accompany him to the shopping mall. They both reach the mall and Tsukasa, as a means of breaking the ice, asks her to pick out some herbs for him. He tells her that they are supposed to be gift for a friend of his who is exactly like her.

Later, when they are taking a stroll through the park, Tsukasa confesses that the herbs were actually meant for her and that there was no friend. Isla is taken aback by this and reacts by shutting herself off emotionally, walking off and leaving Tsukasa to ponder over his thoughts. When he returns to the headquarters, he gives Isla a keychain pendant telling her that she can throw it away if she wants to. Knowing very well that Isla does not accept gifts, this was a hard gamble but it paid off. Isla makes an exception for the pendant and apologizes to Tsukasa for her behavior earlier in the park. It is perhaps here that Tsukasa starts developing a soft corner for Isla but little does he know that she has less than 2000 hours left in her lifespan.

Tsukasa Mizugaki: An 18-year-old teenager and the main protagonist of the story, Tsukasa joins the Terminal Service after failing his college entrance exams due to medical conditions. He is paired with Isla and they both develop a bond while completing assignments for the organization.

Isla: A veteran in the organization having once served alongside Kazuki as her marksman, Isla is the female protagonist of the story. She has a childish appearance that manages to hide her emotions, which makes her the perfect example of a stoic. Despite her experience at the firm, she has a tendency to trip and fall on objects, often leading to hilarious situations. After being off the field for quite some time, she is put back into service after Tsukasa arrives at the firm. At this time, she has less than 2000 hours left in her lifespan, resulting in her inability to perform at her full potential.