Based on the manga series of the same name written and illustrated by Yūki Tabata, ‘Black Clover‘ is a high fantasy anime with a well-developed magic system, complex characters, and a multi-layered plot. The story is set in a world where magic is imbued in everything. However, the protagonist, Asta, was born without any. He doesn’t let it become a severe hindrance and aspires to become the next Wizard King, a title traditionally reserved for the most prominent magic user in the land. Asta’s story truly begins when he becomes a member of the Black Bulls magic night squad. The anime show premiered on October 3, 2017. Here is everything you need to know about its upcoming episode.

‘Black Clover’ episode 170, titled ‘The Faraway Future,’ is slated to air on March 30, 2021. It will be the anime’s final episode or the final episode of the show in the current format. Pierrot Studios (Naruto: Shippuden) produced the series. “Everlasting Shine” by Tomorrow X Together and “A Walk” by Gakuto Kajiwara serve as the opening and ending credit theme songs for the first three episodes. After that, “Grandeur” by Snow Man became the opening theme, and “BEAUTIFUL” by Treasure became the ending theme.

Crunchyroll is simulcasting new episodes of ‘Black Clover’ with English, Spanish, and Portuguese subtitles. Funimation is releasing a simuldub version of ‘Black Clover.’ The first three seasons are available on AnimeLab with English dubbing. You can also watch the dubbed version of the first season on Hulu. Youku Tudou is airing the anime in China.

In episode 169, Noelle, Secre, and others wake up to discover that they have been rescued by the elves and moved to their new village, Elysia. When Noelle sees two children with their rescuers, she asks them their identity. Patolli reveals that the children are the descendants of Princess Tetia of the Clover Kingdom and Licht. Hearing this, Secre becomes emotional as she realizes that the unification between the elves and humans that the first Wizard King envisioned had come true. Patolli also reveals to Noelle and the others that Dryad, the guardian of Elysia, instructed the elves to rescue them. Noelle begs Patolli and the other elves to help them get better. After some consideration, Patolli agrees. 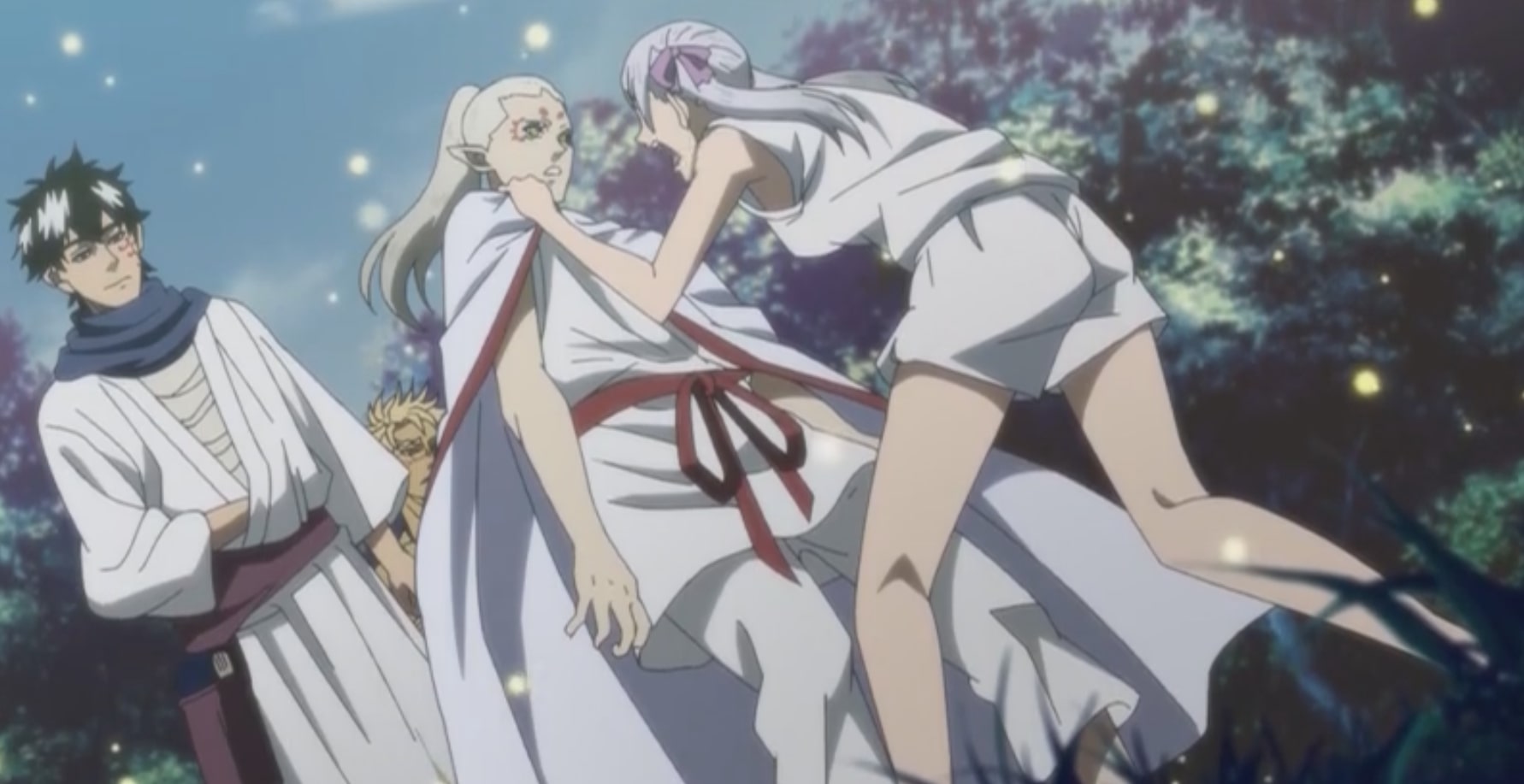 Meanwhile, Julius receives reports on what happened in the Heart Kingdom from Gadjah. Julius informs Gadjah that the Clover Kingdom will attack the Spade Kingdom in three days to prevent the latter from performing the Qliphoth Advent Ritual. Gadjah responds that the Heart Kingdom will fight beside the Clover Kingdom. Nacht visits the Black Bulls headquarters and admonishes Vanessa, Finral, Grey, and Gauche for their lackadaisical attitudes, telling them to get better within the next two days to be part of the invading force.

Nacht later takes Asta to what seems like his former home and leads him to a secret chamber. There, he begins to train Asta on the devil-binding ritual. He summons Asta’s devil Liebe and instructs Asta to defeat the devil. Instead, Asta thanks Liebe for saving his life countless times before telling the latter that although he is a devil, he is not inherently evil. In episode 170, Asta might continue training with Liebe. The Clover and Heart Kingdoms might launch their joint attack against the Spade Kingdom.