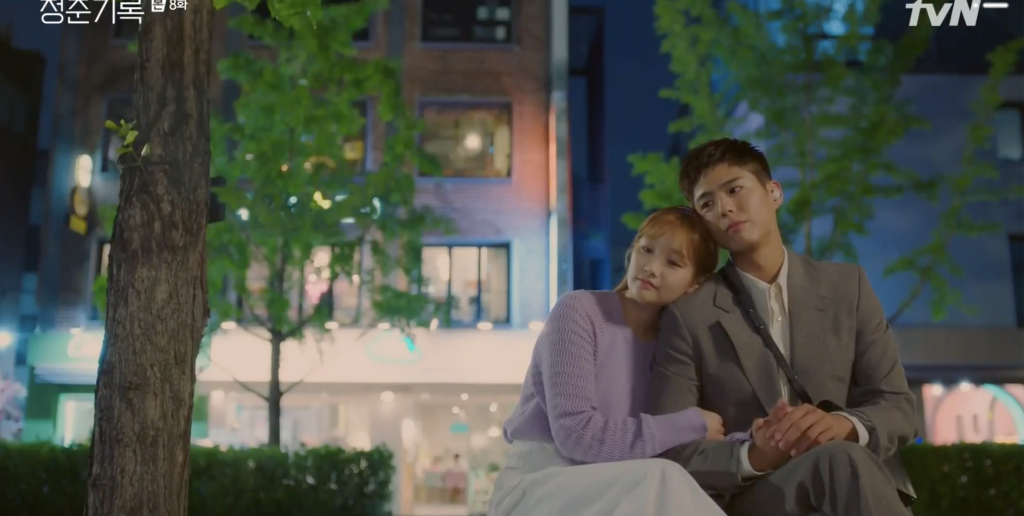 ‘Record of Youth’ is a contemporary South Korean drama that’s currently streaming on Netflix and growing in popularity with each passing week. The show follows the rise and fall in the careers of three individuals – straightforward and humble Hye Jun, rich and easy-going Hae Ho, and hard-working and self-made Jeong Ha. Hye Jun and Hae Ho are childhood best friends who are together trying to make it big in the acting industry but one’s meteoric rise to fame can lead to ugly jealousy in the other. Jeong Ha is a skilled makeup artist who dreams of owning her own premium salon. Hye Jun and Jeong Ha are in the first throws of giddy love, while Hae Ho becomes increasingly infatuated with Jeong Ha. In the highly competitive and materialistic entertainment industry, can Hye Jun and Hae Ho’s friendship endure, especially if they both fall for the same girl? Park Bo Gum shines as Hye Jun and Park So Dam is compelling as Jeong Ha, their chemistry together electric.

Audiences around the globe can stream ‘Record of Youth’ on Netflix, on either the website or on the app. South Korean residents can also watch the popular show as it airs on the cable tv network tvN, every Monday and Tuesday at the time mentioned above. In the section below, we will share a short preview of Episode 11, followed by a summarized recap of Episode 10, so there are going to be SPOILERS AHEAD. Please head over to Netflix right now if you haven’t watched the first ten episodes.

Episode 11 will see dramatic rumors erupt in the media about Hye Jun’s involvement with late fashion designer Charlie Jung (the man who tried to get it on with Hye Jun in the first episode, remember?). I-Yeong (Hae Ho’s snarky mother) will try to rub it in Hye Jun’s mom’s face that Hye Jun is gay, according to the news. The Sa family and Jeong Ha will stand in unconditional support of Hye Jun, even as Min Jae tries to warn him that some people who are jealous of his success will always try to bring him down. Hae Ho’s stance on the rumors is unknown, given that jealousy got the better of him in the last episode. In the next episode, there is also going to be a family discussion around whether or not Hye Jun will buy a house and move out of his parents’ place.

This episode shows the events leading up to the end-of-year drama awards. Jeong Ha bonds with her father, making him an elaborate breakfast. He tells her that he has started painting again and gives her the money that he was saving up for her wedding day. Jeong Ha decides to accept financial support from her father because she wants to be able to mobilize her own funds and put them towards a commercial space for her new salon. Hye Jun is happy to hear that Jeong Ha is okay accepting monetary support from her dad. The two share a meal together and then go for a walk, acting all cutesy.

Jeong Ha hands in her resignation at the salon and forces Jin Ju to publicly apologize for bullying her. Meanwhile, Hye Jun’s ex-girlfriend calls him and when he ignores her call, shows up at the sets of his drama. She says they should be friends because she misses him, but Hye Jun is having none of it. He coldly tells her she should aim to achieve some emotional stability and makes it clear that they cannot be friends. Elsewhere, Hae Ho’s father is disappointed that he is not getting any big roles and tells Hae Ho that it would be better if he were to go for his military service right now. I-Yeong, his mother, also tells him that he needs to be more aggressive when it comes to his career because he is too laidback. All this negative talk and comparison with Hye Jun gets to Hae Ho and we see him shedding tears at the awards show.

Jealousy threatens to run high for Hae Ho but he manages to smile through the ceremony as Hye Jun hosts the show and then also bags the award for best actor. Hae Ho takes Jeong Ha with him for a drive where he opens up and tells her that he hates being compared with Hye Jun. Back home, I-Yeong is depressed too and drinks herself to a stupor. Hye Jun gets a missed call from designer Charlie Jung but ignores it. There are already rumors about them both flying around and Hye Jun’s brother spends the day fighting internet trolls, trying to put the rumors to rest. The episode ends with Hye Jun getting a call from the police sergeant asking him to come to the police station with regards to Charlie Jung’s alleged suicide.