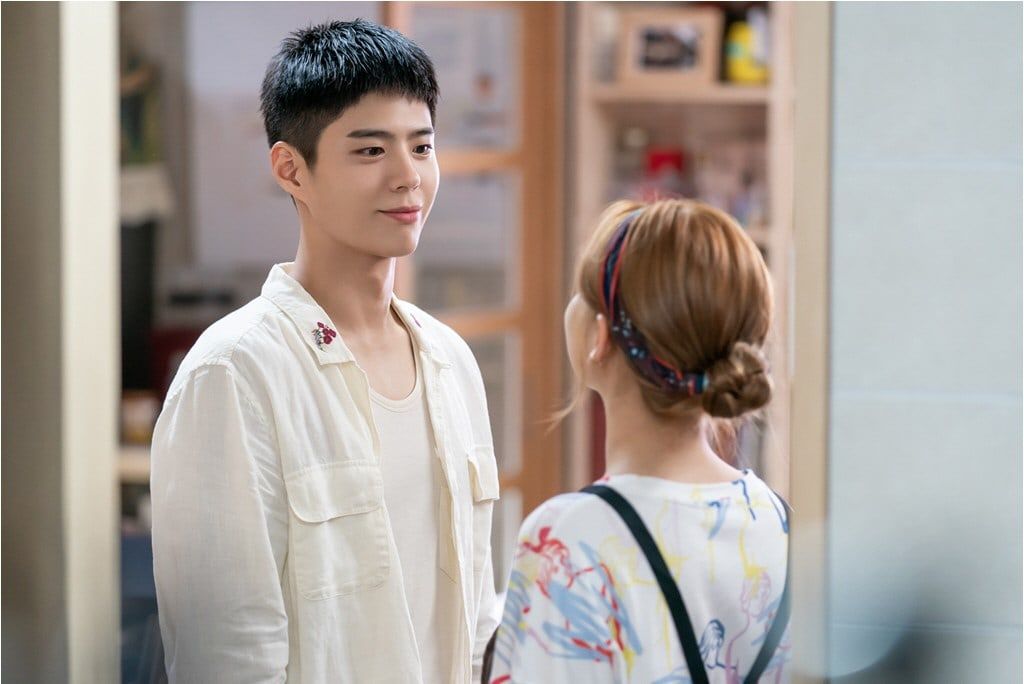 One of the latest South Korean dramas to gain international viewers’ attention is ‘Record of Youth’. The 16-episode drama follows the story of two male models, childhood BFFs who are trying to break into the acting biz, and a makeup artist who is chasing stability and fame in the world of glamor. ‘Record of Youth’ is the first time actors Park Bo Gum and Park So Dam have been paired together and so far, the couple has received favorable reviews from audiences, owing to their convincingly electrifying on-screen chemistry. Park Bo Gum is charming and refreshingly honest in his portrayal of Hye Jun, while Park So Dam is utterly cute and very real and relatable as Jeong Ha. The young individuals in this show strive to maintain their relationships while chasing big dreams in a world that takes into account their family background before it does their talent.

‘Record of Youth’ episode 9 will release on Netflix on October 5, 2020, at 12:00 am (Pacific Time). Two new episodes are released every Monday and Tuesday, out of a planned total of 16 episodes. The Netflix series is also broadcast on the cable channel tvN at 9:00 pm (Korea Standard Time) every Monday and Tuesday, for local audiences in South Korea. Each episode of ‘Record of Youth’ has an approximate runtime of 60-70 minutes.

Viewers worldwide have the option of streaming ‘Record of Youth’ on Netflix, either on the app or directly on the website. South Korean residents can also keep up with the drama as it airs on the cable tv network tvN, every Monday and Tuesday at the time mentioned above. The section below is a summarized recounting of Episode 8 and a prediction of where the story might go next in Episode 9, so there would be SPOILERS AHEAD. Please head over to Netflix right now if you haven’t watched the first eight episodes.

Judging by the short precap clip we see at the end of the last episode, Sa Hye Jun and his grandfather are both on the rise, career-wise. Hye Jun seems to be rubbing shoulders with the likes of popular actor Park Seo Joon at an award show and is being interviewed, his fame exploding through the roof, while his grandfather announces to the family that he got an advertisement as a senior model. Park Do Ha gets increasingly jealous of Hye Jun’s success and asks his manager, Mr. Lee, to do something drastic to take Hye Jun down. Hae Ho’s mother seems to be disappointed for some reason yet to be revealed.

Much happened in the last episode of ‘Record of Youth’ but we will try to give you the main highlights of Episode 8 in a concise manner. Hye Jun and Jeong Ha, whose romantic relationship is progressing nicely with each passing episode, grow closer and spend a lot of time together, being corny and cute. Hae Ho’s mom tells Hye Jun’s mother about the new drama Hye Jun got and his new girlfriend. When confronted with this intel by his mom, Hye Jun asks her if she wants to meet Jeong Ha. At the salon, mean Jin Ju attempts to slap Jeong Ha but an unknown person makes a video recording of the altercation. While Hye Jun spends his workday at the library researching for his ongoing medical drama, his brother gets chewed out by the boss at the bank for not providing better customer service. The brother’s boss is charmed, though, when she meets Hye Jun, who is there to have dinner with his brother. Hye Jun’s brother gets drunk and opens up about Hye Jun having it easier because of his good looks while he has to struggle to prove his worth in life. Hye Jun counters by saying that their father likes the older brother better anyway.

Hye Jun’s medical drama is a huge hit and it seems like his career has well and truly taken off when he is surrounded by scores of fans asking for an autograph. Park Do Ha and manager Lee are both bitter and angry about this and Mr. Lee reveals some (probably false) information to a reporter that could potentially damage Hye Jun’s career. Another person who is not happy with Hye Jun’s rise to fame is Hae Ho’s mom who is more competitive than Hae Ho is. Hae Ho, on the other hand, is truly happy for his friend, even as he secretly pines for Jeong Ha. The gang – Hye Jun, Hae Ho, Jin Woo, Jeong Ha, and Hae Na – is meeting up to celebrate Hye Jun’s new-found success. Hye Jun’s ex, who is mentoring Hae Na at law school, arrives there to create trouble and is intercepted by Hae Ho. Hae Na and Jin Woo, who are secretly dating, are still fighting, making the dinner slightly awkward.

Jeong Ha’s workday gets worse when a customer yells at her and embarrasses her but when Jeong Ha finds out that the customer had been sent by Jin Ju, she pours two glasses of water on Jin Ju’s head, which, frankly, she deserved. To make matters worse, Jeong Ha’s mother suddenly arrives in town to see her which causes Jeong Ha to leave the celebratory dinner early. She and her mother fight and the mother leaves. The episode ends on a happy note with Hye Jun buying a BMW for himself.