Based on a manga series written and illustrated by Negi Haruba, ‘The Quintessential Quintuplets’ or ‘Go-Tōbun no Hanayome’ is a slice-of-life romance anime that tells the story of academically gifted Futaro Uesugi and his developing relationship with the identical quintuplet Nakano sisters. The first season of the anime premiered on January 10, 2019, and concluded on March 28, 2019. Season 2 (written in the stylized form ‘The Quintessential Quintuplets ∬’) started airing on January 8, 2021. Here is everything you need to know about its upcoming episode.

‘The Quintessential Quintuplets’ season 2 episode 11, titled ‘Sisters War: Part 1,’ is set to premiere on March 19, 2021. Bibury Animation Studios produced the sophomore season of the anime after taking over from Tezuka Productions. Satoshi Kuwabara directed the first season, with Keiichirō Ōchi serving as the main writer. While Ōchi returned for the second season, the show acquired a new director, Kaori. Hanae Nakamura and Miki Sakurai provided the score. The Nakano Family Quintuplets, a group made up of the 5 voice actresses portraying the quintuplets, sang both the opening theme track “Go-Tōbun no Katachi” and the ending theme track “Hatsukoi.”

In episode 10, Yusuke Takeda approaches Futaro in their school restroom and tries to gloat over the fact that he has scored more marks than Futaro for the first time. However, the latter has no idea who he is. He later follows Futaro to the school library where the Nakano sisters are waiting. According to Takeda, tutoring the girls is negatively affecting Futaro’s grades. Futaro declares that he will continue teaching the girls and still make it into the top ten of the national mock exams.

However, it’s easier said than done. Futaro struggles to maintain a balance between his own studies and teaching the girls. He even develops dark circles around his eyes. With Futaro’s birthday approaching, Ichika tries to convince the other girls not to get a gift for Futaro, so she can be the only person who gives a gift. However, both Nino and Miku also purchase gifts. Ultimately, the five sisters go with Yotsuba’s idea and give Futaro paper cranes made from their mark sheets. 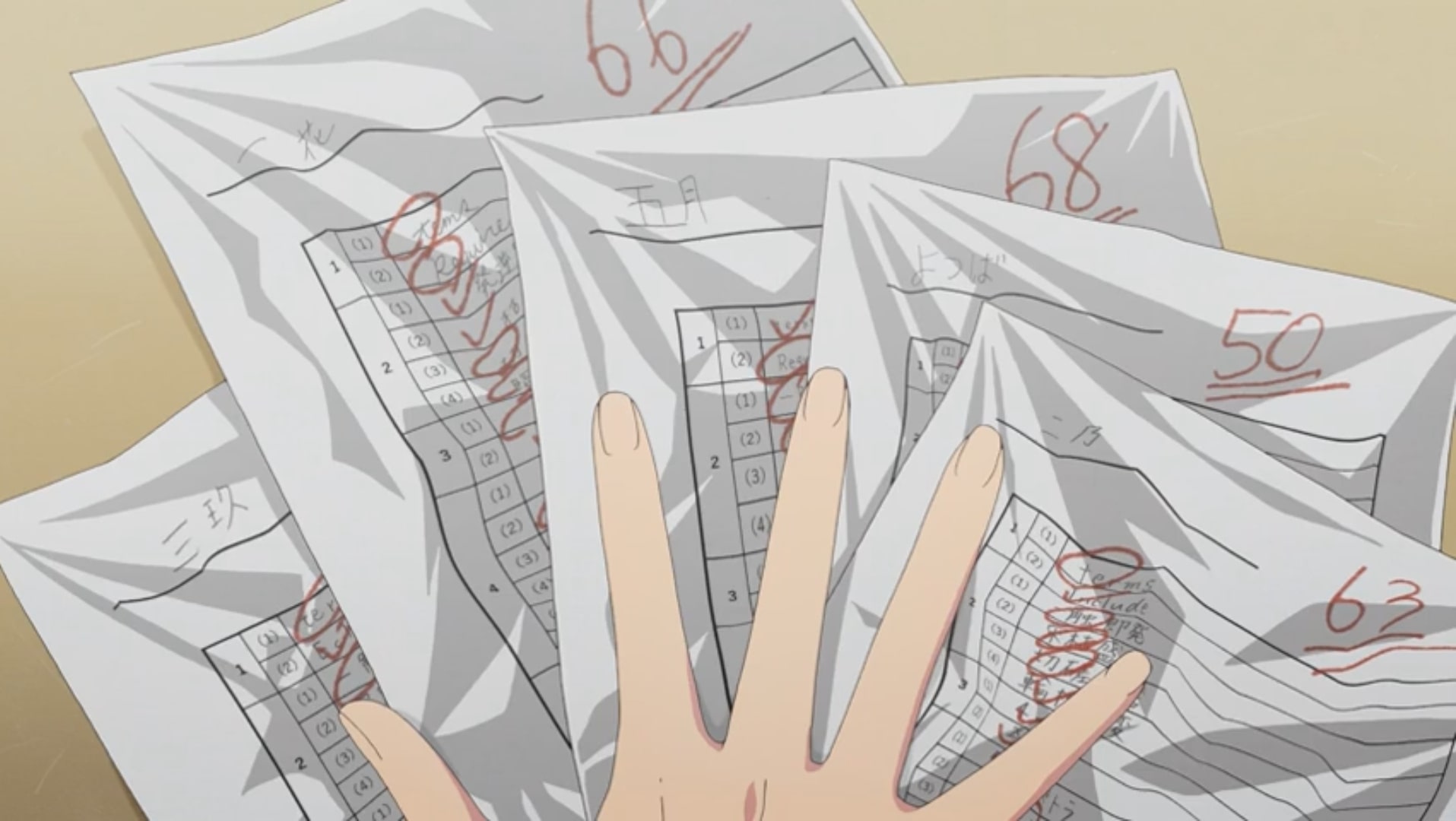 When the national mock exams’ results come out, it is revealed that all five sisters have made progress since the previous year, and Futaro has come third in the country. After the exams, it’s time for a school trip, during which students will be divided into groups of five. Both Miku and Ichika try to convince Yotsuba to put them in the same group as Futaro.

Meanwhile, Raiha reminds her brother that he needs to thank Yotsuba for helping him during the school camp. The next day, he takes her out for an activity of her choosing. However, Futaro notices that she keeps picking what her sisters prefer and asks her what she wants to do. Yotsuba takes him to the park, where she often comes to relax. After an incident with the swing, Futaro starts laughing, finally free from all his stress. Later, Yotsuba tells him that she has gotten what she wanted.

Futaro reveals to the girls that he will go on the trip with some boys from their class, leaving the sisters with no other choice but to go on the trip together. In episode 11, an active competition might begin between some of the sisters for Futaro’s affection.