Based on a manga series written and illustrated by Negi Haruba, ‘The Quintessential Quintuplets’ or ‘Go-Tōbun no Hanayome’ is a slice-of-life romance anime that revolves around the identical quintuplet Nakano sisters and their tutor Futaro Uesugi. The first season of the anime premiered on January 10, 2019, and concluded on March 28, 2019. Season 2 (written in the stylized form ‘The Quintessential Quintuplets ∬’) started airing on January 8, 2021. Here is everything you need to know about its upcoming episode.

‘The Quintessential Quintuplets’ season 2 episode 8, titled ‘Scrambled Eggs,’ is set to premiere on February 26, 2021. Bibury Animation Studios produced the sophomore season of the anime after taking over from Tezuka Productions. Satoshi Kuwabara directed the first season, with Keiichirō Ōchi serving as the main writer. While Ōchi returned for the second season, the show acquired a new director, Kaori. Hanae Nakamura and Miki Sakurai provided the score. The Nakano Family Quintuplets, a group made up of the 5 voice actresses portraying the quintuplets, sang both the opening theme track “Go-Tōbun no Katachi” and the ending theme track “Hatsukoi.”

Episode 7 begins as Futaro goes to search for Nino. It is revealed that she has gone to have a conversation with her father, who tells her that he wishes for her and her sisters to come back home. However, Nino declines but promises that she and other sisters will ensure that Ichika doesn’t have to bear all their financial responsibilities alone. Futaro shows up on his boss’s motorcycle and asks Nino to come back to Revival with him. Nino confesses that she has feelings for him as they ride back, but he doesn’t hear anything over the roaring engine and whistling wind.

While cleaning dishes together at the restaurant’s kitchen, Nino discovers that Futaro hasn’t heard what she said. At first, she storms off frustrated but soon returns and tells Futaro that she loves him again, this time loudly and clearly. Ichika, who is outside the kitchen, accidentally overhears the conversation. 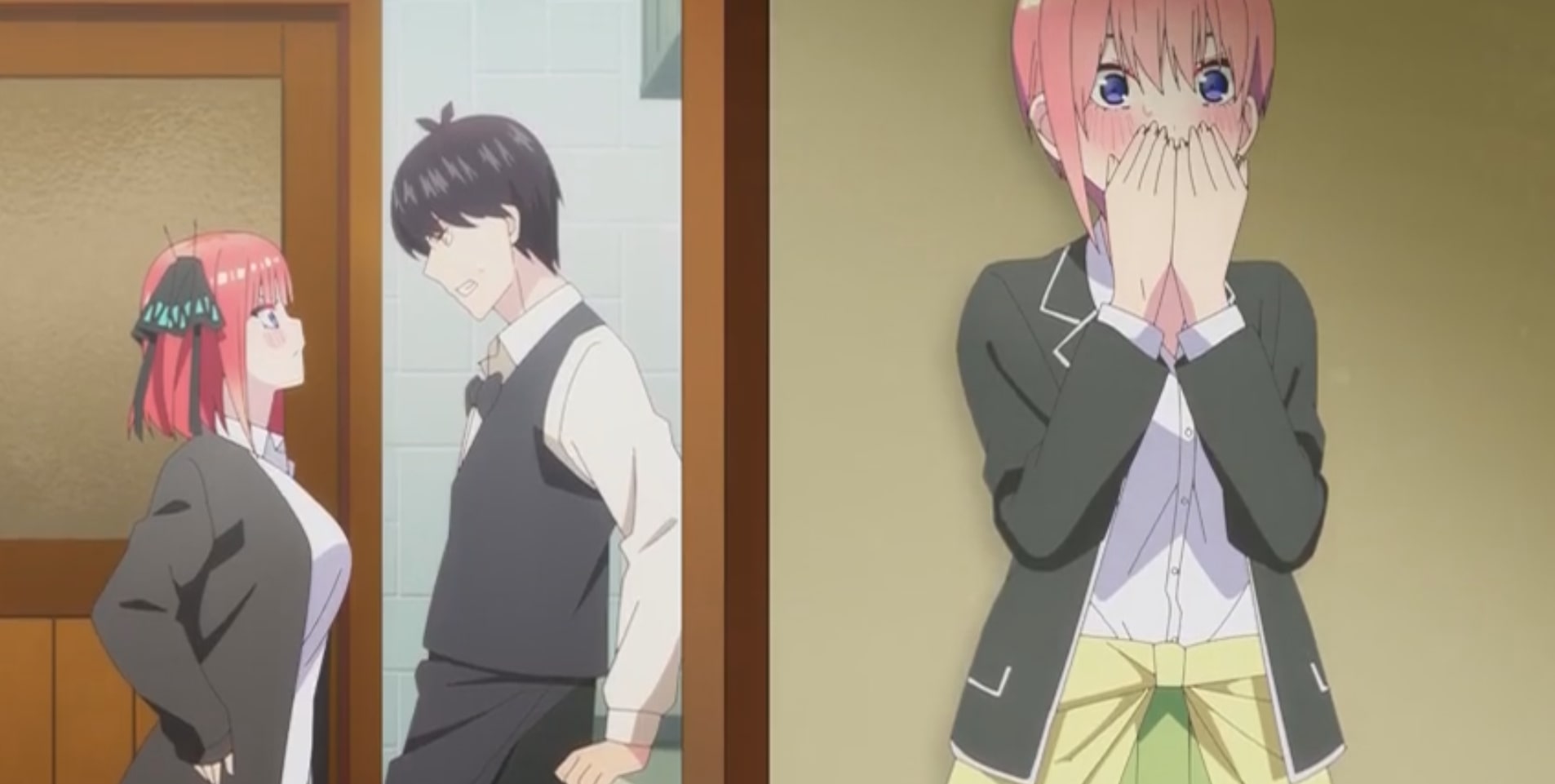 While shopping at a convenience store, Futaro and Miku run into each other. Futaro still hasn’t processed Nino’s confession, while Miku worries about her own near confession. Futaro wins a family trip to Toraiwa Hot Springs and takes his father and sister with him. At Toraiwa, he discovers that the Nakano sisters are also there to spend time with their father.

Futaro becomes increasingly confused when the girls start behaving oddly around him. He tries to speak to each of them before Itsuki tells him that she will later speak to him. Futaro later finds a note in which he is told to come down to the garden at midnight, which he believes is from Itsuki. He comes across one of the Nakano girls dressed as Itsuki. She tells him that their relationship is at an end. The following morning, Futaro and the real Itsuki meet at the mixed baths. He learns from her that she isn’t the one whom he saw the previous night.

When Nino comes to bathe with him, he asks her if she is really Nino. Agitated once again by Futaro’s cluelessness, she leaves. The episode ends as Itsuki points out that their relationship has evolved, turning Futaro into their friend. In episode 8, Futaro might continue his attempts to figure out how to recognize the sisters correctly.