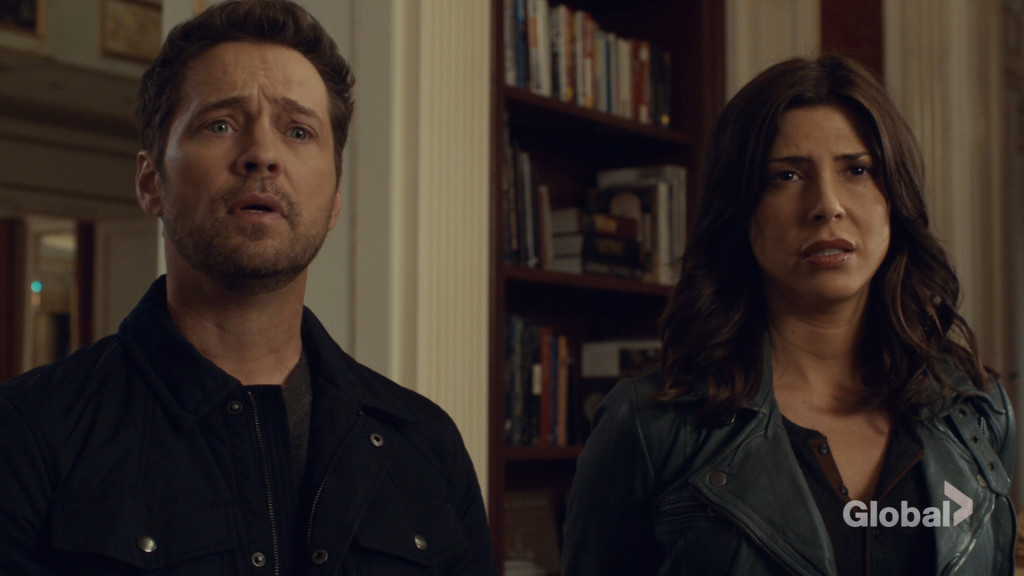 ‘Private Eyes’ is a Canadian crime comedy-drama television series that airs on the Corus Entertainment-owned Global Television Network. Created by Tim Kilby and Shelley Eriksen, the show follows the adventures and misadventures of an unlikely crime-solving duo consisting of a former professional ice hockey player and a private investigator. It is inspired by a 2012 novel called The Code by G.B. Joyce. As far reception is concerned, ‘Private Eyes’ enjoys a fair amount of popularity among viewers, and has a good rating of 7.4/10 on IMDb.

Season 1 of ‘Private Eyes’, consisting of 10 episodes, premiered on Global on May 26, 2016, and was quite a hit among audiences. Months after the premiere of Season 1, Global, on August 24, 2016, announced that ‘Private Eyes’ would be making a comeback with an 18-episode Season 2. A year later, the first part of Season 2, comprising nine episodes, premiered on May 25, 2017. The second part, with the rest of the nine episodes followed, premiering on May 27, 2018.

Shortly after Season 2 came to an end, Global, in August 2018, renewed the show for a 12-episode Season 3. Making the announcement, Lisa Godfrey, Vice President of Original Content, Corus Entertainment, said, “As we continue to develop original content that resonates with our viewers, we are proud to deliver another instalment of ‘Private Eyes’ to fans, which will continue to be full of Canadian talent both in front of and behind the camera in Season 3. Audiences in Canada and around the world have fallen in love with this dynamic detective duo, and we can’t wait to see what’s in store next as the #Shangie relationship continues to develop in this new season.”

Now fans of the show are waiting for the next season. Here’s everything we know about it.

Private Eyes Cast: Who is in it?

Further, the show has also seen some minor characters being played by guest stars. As far as Season 4 of ‘Private Eyes’ is concerned, the main duo and most of the recurring cast members make a comeback and reprise their roles.

Private Eyes Plot: What is it about?

‘Private Eyes’ largely focuses on the unconventional crime-solving duo of Matt and Angie, who ultimately go on to become an investigative powerhouse. In the words of Maria Hale, Senior Vice President, Global Entertainment and Content Acquisition, “Private Eyes is a smart combination of crime-solving drama and playful banter, underscored by the undeniable chemistry between two strong lead characters.”

The show starts off at a time when Matt has hung up his ice hockey blades and is finding his life going downhill. Matt’s post-hockey career gets off to a rocky start after a stint in the sports broadcasting industry leads to public embarrassment. Left with no options to pursue a career in the sports industry anymore, Matt decides to try and redeem himself by teaming up with Angie, who is a private investigator in charge of Everett Investigations. Once Matt gets into the world of crime-solving, he finds a new home for himself, where his abilities to hustle, read people, and anticipate opponents’ moves are not only relevant, but also extremely important. Angie, on the other hand, is smart, decisive, and a strategic thinker, and with the help of Matt, tries to live up to the legacy of her father, who was an accomplished investigator.

Together, the duo go about solving a variety of high stakes crimes in the worlds of fine dining, horse racing, scandalous literature, magic clubs, etc. and these investigations put their wits, strength, and teamwork to the test. Apart from the the show’s focus on the investigative side of things, ‘Private Eye’ also has a satisfying dose of humor, and its ability to engage viewers is even more enhanced by the electrifying chemistry between Matt and Angie.

Private Eyes Season 4 Release Date: When is it coming?

As far as the next season goes, Global TV have not made an official announcement yet. Though considering the popularity of the show, we would be surprised if it doesn’t get another season. If the show does get renewed, our best guess is that ‘Private Eyes’ season 4 can release sometime in May, 2020. We will update this section as soon as we hear more.

While we wait for an update on season 4, check out the season 3 trailer to refresh your memories.