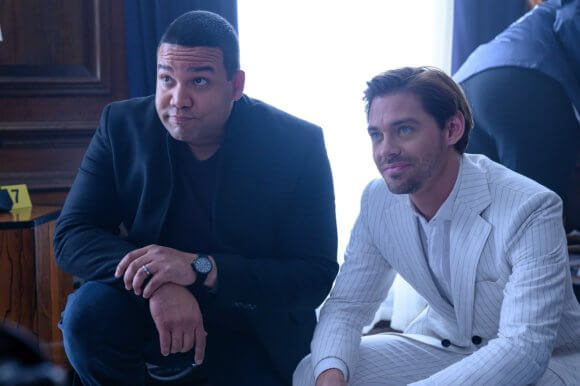 ‘Prodigal Son‘ is a thrilling crime drama about a boy who helps in the arrest of his serial killer father. Having severed contact with him voluntarily, this individual is thrown into his past, when he has to track down a copycat killer. Now an FBI profiler, the young man has to rely on his father’s insights, while battling his inner demons.

The show is in its first season but has already drawn a fair bit of positive attention due to its gripping narrative elements. Naturally, you might be wondering about what goes down in the latest episode. We are here to tell you that, right after walking you through when and where to watch the upcoming episode.

Prodigal Son Season 1 Episode 14 Release Date: When Will It Premiere?

Titled, “Eye of the Needle”, the episode sees Jessica continuing her search for the ‘girl in the box’, only to be confronted by the ‘carousel killer’. This murderous individual happens to have a vendetta against the Whitlys. The NYPD questions families linked to Martin’s victims, but Malcolm and Jessica track down the tip-line caller turned killer, who is blackmailing her.

Ainsley receives a promotion at work, only to realize that she might not escape the demand for serial killer reports.

Where Can I Watch Prodigal Son Season 1 Episode 14 Online?

‘Prodigal Son’ is a Fox show, so the simplest way to see it would be with a cable connection. If you don’t have one, head to the site to stream it. Cord cutters are in luck because you can use Hulu, YouTube TV, DirecTV, and Fubo TV, to stream and watch the show.

Amazon Prime subscribers can buy and stream the episodes.

You can check out the promo of the upcoming episode below. It appears that a mysterious individual has issued a direct hit on Martin Whitly.

Episode 13 starts with Malcolm being driven to the airport. Jessica is determined he should go to Tahiti, but Malcolm convinces Gil to take him to a crime scene along the way. His white suit draws some attention and banter. However, all this is quickly tuned out, when moving the corpse reveals a landmine underneath.

Malcolm’s quick thinking helps to contain the situation. He allows others to evacuate with the body and gives JT and Gil some leads about building the criminal’s profile. Then he uses his weapon to shoot through a window, and jumps out, landing on Gil’s car.

There is a moment where he might say something meaningful to Dani, but it does not materialize. However, the show peppers moments between the two throughout, leading us to believe that a romance might be blooming for them. When they have to crash a wedding, they stop to get Dani a dress, and Malcolm’s admiration is discernable.

Meanwhile, he confides in Dani about how he cannot spend too much time on himself, being scared of his thoughts. The trauma of Malcolm’s personal life is never too far away, and he wants to confront his father about the recently-discovered fact that Martin wanted to kill Malcolm when he was a baby.

However, Martin denies this, saying that if he wanted to do it, he would have. Now Malcolm has to decide who to believe and has to sort out how he feels towards Dani. Undoubtedly, these are all issues that will be explored in upcoming episodes.