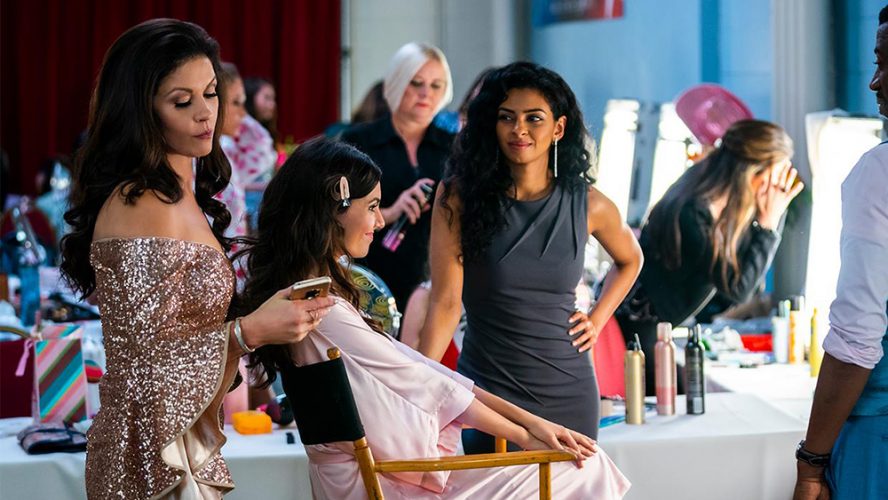 In the mood for a savage, snarky and sassy series? We have just the right show for you – a dark comedy series, Queen America created by Meaghan Oppenheimer that premiered on November 18, 2018, and concluded on January 6, 2019, causing fans across the world to swoon with its level of sophistication and appeal. The first season consisted of 10 episodes and received praise for its sharp dialogues and filmography. This series makes you want to enter a pageant and walk the ramp in full gear. Being a Facebook Watch series, it is available to almost anyone willing to watch it. At the time of writing, the show had already received whopping 9 million views on Facebook Watch.

Queen America Cast: Who’s in it?

Catherine Zeta-Jones, our female lead, plays the role of Vicki Ellis, a very uptight beauty pageant coach from Tulsa, Oklahoma. She is responsible for training every single girl who ended up winning Miss Oklahoma Starred and Striped U.S. Beauty Pageant. Belle Shouse plays the role of Samantha Cole who holds the current title of Miss Oklahoma Starred and Striped U.S. Beauty Pageant. She comes to be Vicki’s client as well but to her disappointment, Cole is awarded the second position in the pageant, but after the girl who won the first position is dethroned, Samantha gets the title.

We also have Teagle F. Bougere as Nigel Hill who works for Vicki as a hair and make-up artist. Rana Roy as Mark Clark is a personal trainer and Molly Price plays Katie Ellis, in the role of Vicki’s sister and Bella’s mother who was formerly a receptionist at a car business but now works as a house cleaner in Tulsa.

Isabelle Amara plays Bella Ellis who is Katie’s daughter and Vicki’s niece. Megan West plays the role of Brittany Garrett who holds the current title of Miss Texas Starred and Striped U.S. and client of Mandy. Tom Ellis as Andy who is dating Vicki is a single father and a chef by profession.

Judith Light appears in the series as a mentor to Vicki in the role of Regina Parrot. Alexander England plays Rick Bishop, who is the member of the Miss Oklahoma Starred and Striped U.S. Beauty Pageant board but has a horrible past of harassing women of the pageant. Kelsey Griswold starred as a guest in the Kelly Marsh who was crowned in 2014.

Queen America Plot: What is it about?

The series is set in Tulsa, Oklahoma where Vicki Ellis is the most renowned and ruthless pageant coach and everyone she trains ends up winning the Miss Oklahoma Starred and Striped U.S. Beauty Pageant. However, an unfortunate turn of events puts Vicki’s entire career and reputation at stake as Miss Tulsa, Hayley (played by Victoria Justice) who Vicki trains for the win, loses to Samantha Cole. Vicki then shifts her eyes on Samantha hoping she can turn her luck around by training her for the title of Miss America. Vicki begins to have doubts about Samantha’s abilities and tries desperately to find talents in her that would help her stand out in the herd of sheep.

Pageants are supposed to be exciting events involving employing your strengths and pitching them against other pageant contestants in a healthy, competitive atmosphere, but Queen America is not all fun and glamour alone. It is a dark competition that takes so many turns along the way and drives its viewers deeper into the horrifying never-seen-before truth of pageants. This competition is harsh and difficult, testing your talents and patience at the same time.

Catherine Zeta-Jones, one of the most charming and talented actresses in Hollywood, said about her role of Vicki, ”She is ruthless and former beauty pageant queen, now turned a pageant coach but she is the kind of the character that I want people to love to hate her and hate to love her. You see the quacks and the fragility in her, it’s funny and sad and truthful. This character is like my alter ego, everything that as a grown-up woman, mother of two and a loving wife, that I can’t say, and I don’t, Vicki Ellis says.”.

In an interview with Variety, the creator of the show, Meaghan Oppenheimer said, “There are a lot of negative things too, but I didn’t want to let anyone off the hook for that, but they’re a lot of girls that I’ve spoken to, that are so grateful to pageants.”

Let’s stay tuned for season 2 and see what her character brings to life this time, with gel nails, the perfect high heels and red lipstick ready to conquer the pageant world with her pageant queens.

Queen America Season 2 Release Date: When will it premiere?

Queen America season 1 premiered on November 18, 2018. As far as the next season goes, there has been no official word from the makers but we are hopeful, as is Oppenheimer, who said, “I think it’s very likely, fingers crossed.” Season 2 will probably have even more drama and darkness and we are so excited for it.

Zeta-Jones has also expressed that she would love to do another season. She said in an interview, “[Vicki] still lives in a world before political correctness and before all these great things that have happened for women, and she can feel that world slipping away. That’s why I’d love to do a second season, because there are so many directions we could go next with a woman who, at the age of 49, is saying, ‘OK, what do I do now?'”

Our best guess is that Queen America season 2 can release sometime in November, 2019. We will update this section as soon as we hear more.

While we wait for an update on Queen America season 2, check out the season 1 trailer to refresh your memories. If you haven’t seen the show yet head over to Facebook Watch to catch all the episodes of the previous season.