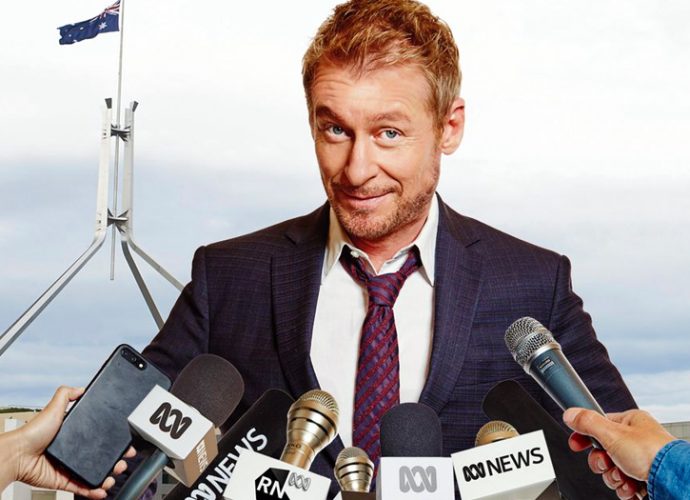 Upon first glance, it is almost too easy to discard Rake as another gander at the easily sustainable formulaic TV on courtroom drama. The dynamics within the court of law certainly makes itself a low-hanging fruit for any unbecoming scriptwriter to dish out a (typical) monster of the week structure with a self-encapsulated court case each episode – sometimes with a pinch of the moral grey between defendants and prosecutors. There have been examples aplenty, and even the basis of source material can easily be accounted for by real-life archival case studies. However, Rake is none of these. Rake is – in simple terms – a quasi-court procedural based on the premises of Charles Waterstreet’s life and writing (the very same famous columnist from The Sydney Morning Herald), tipped with the touch of comedic and creative genius of Peter Duncan and Richard Roxburgh. ABC’s now-defunct recent Boston Legal, another show related to the courtroom dynamics and politics, was no doubt a show of great merit. It was technically sound and had decent scriptwriting elements.

However, it feels tame in comparison to Rake, as Rake is not merely a show about the New South Wales court and law practices, but a carefully stretched out metanarrative that reflects the state of law and politics in contemporary Australia – never to forget its never-ending series of satirical jabs at the Australian culture and the contemporary real-life events. At the point the article is being written, Rake is already heralded as a definitive moment that shifted and changed the landscape of television in Australia dramatically – which is no small feat for a show which started out with negligible ratings and an ever so slightly increasing small fanbase who discovered it as 2010’s biggest TV hidden gem. Rake is no lone ranger in the field of Australian satire on TV – we already had masterpieces like Front Line and Housos, but Rake is the ultimate manifestation of this heritage as a show that becomes successful to pass its scathing commentary on Australia, its hijinks, and its people in the same tongue-and-cheek fashion championed by the early seasons of The Simpsons.

Rake did not initially do too well in ratings because its cast did not consist of stars as big as James Spader (U.S. audiences will remember him from the post-Michael seasons of The Office) in Boston Legal (ABC’s previous law-themed show that went off the air in 2013). Richard Roxburgh, who plays the protagonist Cleaver Greene, however, is a prominent figure both on the Australian stage and Hollywood theatrical productions, including commercial action flicks like Mission Impossible 2. Even though his CV points at a number of such commercial films, Roxburgh is widely acclaimed for his masterful acting on-stage, and his comedic genius that is unparalleled in its unique way as far as the acting scene of Australia is concerned. Other major roles in the show are played by Russell Dykstra (Barney Meagher, Cleaver’s best friend, and solicitor), Matt Day as the menacing David Potter, and New Zealand actress Danielle Cormack (Scarlet Engles) who is widely known for her role in Shortland Street.

Rake Plot: What is it about?

Even though much of Rake follows an episodic structure with one courtroom trial each episode apiece, for the most part, the overarching thrust is a focus on the characters – including the focus on the Greene himself. Much like Sherlock Holmes and Hugh Laurie’s House M.D., Greene is a misanthropic genius figure who is self-destructive – which makes Rake all the more intriguing.

There has been quite the ruckus about the cancellation(s) of the show – with the central star Richard Roxburgh (acting as a spokesperson for the production team when he made such and such comments) at the forefront of what can be called a saga unto itself. To elucidate it in simple terms: Rake and its team have, on several occasions, given out the impression that the respective season might likely be their last one.

At the very second season, for example, Roxburgh had noted in an on-set interview that the vision for the show held that it should remain compact to be incisive, that it should be taken off air before it loses its edge, that it should ‘only do three and then that story will be done.’ ‘It’s certainly what we feel.’, said Roxburgh. ‘You certainly don’t want to be flogging a dead thing.’

Understandably, for a show that accrued a massive fanbase only after its debut season, it was a big deal in 2012 – and we had seen a large sect of the fanbase bemoaning an extension in lieu of the supposed season three finale. However, as it was only one interview, contention still existed as to whether Roxburgh’s words were set in stone. But this kind of certainty is exactly what Roxburgh gave at another interview right before the season 3 premiere, noting that they still intended to go off when they were at their qualitative and popular zenith. At the dreaded hour near the end of season 3, however, strong indications existed for a continuation. The show was then confirmed for another season.

However, at the announcement of the latest fifth season, ABC sources made it clear that this would be their final dive. Given the track record, some would write it off as a marketing stance to generate more hype. However, seeing how the show has made its pronounced shift into the realm of politics with the plot thickening volumetrically and then wrapping itself up within the same season – Rake did go out with a bang, and it seems that season 5 truly was the final season. The show’s status has been officially set to ‘cancelled’, and there will be no season 6.