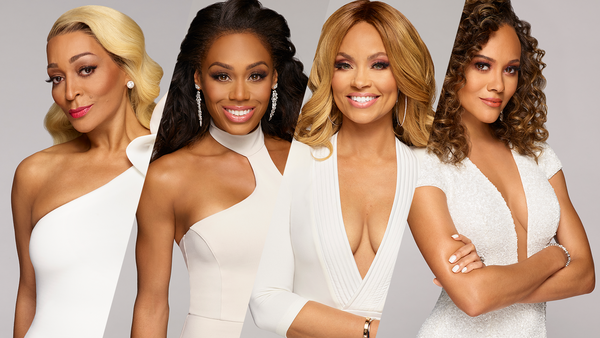 The show revolves around both the personal as well as the professional lives of several women who live in Potomac, Maryland. Naturally, being part of the famous ‘The Real Housewives’ franchise, the show garnered viewers in no time and their following only keeps increasing as they attract larger audiences with unbridled drama. Critics have also praised this show, saying that the one-liners and interactions in the episodes provide enough content to keep everyone entertained, and completely hooked to the series.

The Real Housewives of Potomac Cast: Who is in it?

‘The Real Housewives of Potomac’ has a cast that keeps changing over the seasons, as sometimes new women are added to the show, or we see some fan-favorite characters return in the later seasons. The series includes Candiace Dillard, Karen Huger, Ashley Darby, Robyn Dixon, Gizelle Bryant, Brynee Baylor, Charisse Jackson Jordan, Katie Rost, Monique Samuels, Jon Arundel, Vincent De Paul, and a few other members. Katie Rost is a former cast member who returned for season 4. Gizelle Bryant and Candiace Dillard also returned to the show along with Robyn Dixon, Karen Huger, and Monique Samuels.

It will be interesting to see what, if any, additions or removals are done for season 5.

The Real Housewives of Potomac Plot: What is it about?

‘The Real Housewives of Potomac’ gives viewers a close look at the lives of various women, who have varying degrees of affluence, and are at different stages of their lives. We see how these residents of Potomac go about trying to get a grip on their own lives while changing society at the same time.

This reality show follows the ladies along with the highs and lows of their marriages, friendship, relationships and other aspects of life that are being challenged in one way or other. The show is packed with lots of love, hate, talks, and gossip. Every episode of the show is replete with twists and turns. While all the ‘The Real Housewives’ shows are supposed to focus on the women in the show, sometimes the focus gets shifted from the women to the significant men in their lives mostly when the relationship is messed up.

What stands out in the show is the indulgent drama that is offered to the viewers. We are told at the offset that being part of the neighborhood in Potomac requires either money or legacy. The women on the show seem to have either or both, and they are worse off for it. The series does not hesitate to categorize women into the archetypes that keep the shows going like the socially subversive member, or the diva of the group. Not only are the archetypes obvious, but the incidents appear to be staged as well. With this lack of realism surrounding the show, it is surprising that viewers still love it. Perhaps this is because it is the best of what escapist reality tv has to offer to us.

Since viewers have the luxury of watching the show in the comfort of the fact that they are unlikely to ever behave in this manner, they can truly enjoy the shenanigans that go on in front of the cameras. The franchise continues to be diverse, and almost all the cast members are rather ill-behaved, which makes for fun interactions. However, the show should be critiqued for bringing more infamy than fame to the women who are part of the cast, and for trafficking in extremely negative female stereotypes, which include catfighting, frivolity, and backstabbing.

Hopefully, in the upcoming season, the show will continue in a similar manner, and we will see our favorite housewives return with a whole lot of drama, as they spice up theirs and our lives at the same time.

The Real Housewives of Potomac Season 5 Release Date: When will it premiere?

‘The Real Housewives of ‘Potomac’ Season 4 premiered on May 5, 2019. As far as the next season goes, we don’t have an official announcement yet. Though considering the popularity of the show, there’s no way Bravo will not bring the show back for another season. We expect ‘Potomac’ Season 5 to release sometime in May, 2020. We will update this section as soon as we hear more.

The Real Housewives of Potomac Trailer:

While we wait for an update on season 5, check out the official trailer of Season 4 of ‘The Real Housewives of Potomac’ here.