Who is Rhino on ‘The Masked Singer’? Clues and Guesses 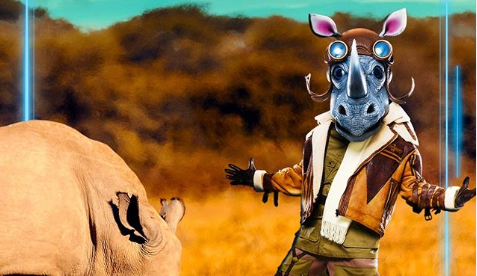 Combining the fun of a singing competition, with the thrill of guessing the celebrities’ identities correctly, ‘The Masked Singer‘ has enjoyed a fair bit of popularity. Currently, in Season 3, the show continues to attract bigger celebrities, than ever.

In fact, to make the process all the more fun, ‘The Masked Singer’ has improved on the clue system, making it harder for panelists and viewers to discern the identities of the performers until the time of unmasking arrives. One of the performers, that has kept us guessing, has been Rhino. Finally, we get to see him on stage in Group C.

Curious to know the clues and guesses surrounding Rhino’s identity? We have got you covered.

At this moment, there are not many clues about Rhino. However, we can get some hints from Rhino’s outfit. Dressed in an aviator outfit, there is an obvious discrepancy with what is expected from a rhinoceros. Since rhinos have never been known to fly, fans have correctly guessed that the aviator outfit has to do with the performer’s own love for, or experience with, airplanes.

You can check out the post introducing Rhino’s outfit, below.

Going by Rhino’s outfit, fans have deduced that it has something to do with jungles. Combining it with the aviator outfit, many fans have guessed it to be Nick Jonas. Having appeared in the ‘Jumanji‘ movies, Jonas seems like a good guess, because his outfit in the movie is somewhat like the Rhino’s.

Obviously, there are many who believe it might be Dwayne Johnson, based on pretty much the same hints. Moreover, when it comes to Johnson, it makes sense, because he might relate to a rhinoceros due to his extremely muscular build.

Without much to go on, fans have thrown out guesses like Jim Carrey and Alec Baldwin as well. You can check out a tweet, below.

One of the more thought out guesses about Rhino’s identity has come from those who claim it might be John Travolta. The veteran Hollywood actor has been a pilot for quite some time, having acquired his license at the age of 22. Since then, Travolta has almost proceeded to turn his house into a private airport.

Moreover, Travolta has some experience behind the mic, as is evident from his appearances in ‘Grease‘ and ‘Hairspray’. While these guesses are good, there have been fans who have shot in the dark, in the absence of clues. Some have pointed at Kevin Hart and Dog the Bounty Hunter at being possibilities.

When it comes to Twitteratis, they have their own wild theories. One fan has pointed out that it might be Pitbull, the pop singer who has carved a name for himself. Check out the tweet below.

Some fans have guessed that Rhino might be an athlete. They have posited that he is likely to be a basketball player. Naturally, Lebron James is a popular guess. However, one fan has also stated that it might be Montel Jordan. Check out the post below.

Ok the Rhino is tall as hell so he's either a basketball player or he's Montel Jordan.

Two other popular guesses point at Rhino being Jason Momoa or Flavor Flav. Notably, both of them have the physical build to appear as Rhino. However, considering Momoa’s busy schedule, it is far more likely for Rhino to be Flav. You can check out the fans’ tweets about Rhino being Flav or Momoa, below.

#MaskedSinger okay I know it's early but I bet the Simpsons already made this prediction….I bet the Rhino is Flava Flav

As you can clearly see, the guesses about Rhino’s identity are all over the places. Some feel he is an athlete, while others feel Rhino is an actor. We have to wait for the clue package, and some actual performances to understand who is behind the Rhino outfit.