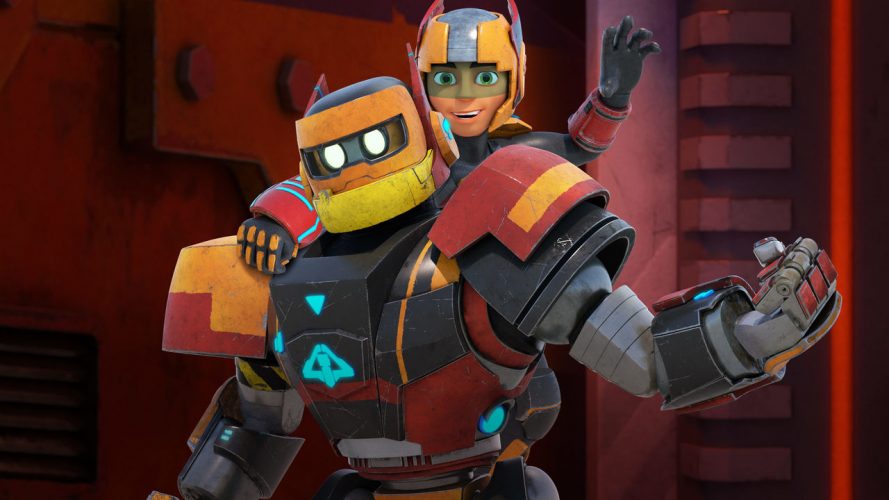 Netflix’s recent multi-billion dollar investment to get a foothold in the market of the anime-watching clientele has by now been well-documented, and by the sheer amount of attention the Netflix originals like Castlevania and Devilman Crybaby are receiving, as well as the many shows which are slowly but steadily being integrated into an ever-expanding library of anime had also become very palpable by mid-2018.

For equal measure, there has also been a number of western animated series licenses that Netflix has its hands on (perhaps most notably BoJack Horseman) – but on the 3D animation department, they appear somewhat lax. There have not been many entries in this area of TV and streaming in general for the last couple of years, Shaun the Sheep having been wrapped up by 2017 as the final vestige of the mid-2000 era mainstream western animation scene (although it was broadcast largely on kids’ channels). However, Netflix has somewhat grabbed the reins by becoming the exclusive distributor for some of the few entries in the genre. Robozuna is the latest of the examples. Critical views aside, the show has fared well commercially because it has a well-established vision for the show that it remains consistent with through and through.

However, it is certainly not on par with the likes of Bojack qualitatively. The show does have some heavy-handed themes underpinning it, as the premise draws heavily upon the politics found in Star Wars – a seemingly vagrant and outlawed rag-and-tag band rebels against the ‘big bad’ authoritative figure. These dynamics are almost unanimously agreed upon to be the most common tropes in high fantasy that so much as grazes near a politically charged world-building.

However, in the case of Robozune, it is also the rise of human figures against a faceless robotic empire that attempts to assume control over everything – which, as one might recall, is also the case with Star Wars. Another resemblance that late gen-z’s and early millennial would discover is with the 1990’s cartoon La Maitre Des Bots, broadcasted in Canada and America as the English dub, The Bots Master, which similarly features a boy and his companion robot in a futuristic world where robots have been heavily industrialized for fast-track progress. At any rate, Robozune manages to satiate that long-asleep sci-fi itch by being a no-frills futuristic show that has heart, if not technical merit.

Robozuna Cast: Who’s in it?

Even though the animation and graphics look very dated by 2019 standards, it can be written off as a stylistic choice. However, the budgetary restrictions of Robozuna show in its payroll of voice talents – unlike the many star-studded Netflix originals in the animation department, the actors and actresses that Robozuna features is not very well-known, save for Morwenna Banks. Morwenna plays Danuvia in the show, who is a side-character at the most.

However, the silver lining to the cast of otherwise unknown people is that it also acts as a launching pad for many of the actors’ careers. The best example is Taylor Clarke-Hill, who plays Ariston (alongside his real-life brother Tom Clarke-Hill, who plays Mangle). As a rising actor with very little experience compared to the likes of Morwenna, Taylor has done a great job trying to bring the character of the protagonist to life. Although a tentative cast has not been announced in any way by Netflix for a second season, we can positively keep our hopes up that Taylor, Tom, Morwenna, and Larissa Murray (Feronia) will return to their respective roles if a second season ever takes place.

Robozuna Plot: What is it about?

Robozuna’s name derives from a tournament of the same name that takes place in the world of the sho – as a hybrid battlebots-basketball sports, one into which the protagonist is eager to chip in his personal robot Mangle. However, the plot thickens while the protagonist gets trammeled up in the sudden discoveries of the evil schemes and ways of the oppressive evil empire.

Robozuna Season 3 Release Date: When will it premiere?

Robozuna at first glance, and after noting its consistent tone and thematic stress points, can very well qualify as a show targeted towards a young teenage demographic. It is perplexing why it harps on Star War-esque premise and old-school Sci-Fi plot precepts if this is the case. Thanks in part to Netflix, though, the show has received ample attention despite its many flaws in execution – and the viewer reception has been decent if not a 10/10 perfect score from every viewer.

The plot of the show has been wrapped up neatly, but there is a good amount of space for another season since two seasons have also waylaid the lore and worldbuilding in the Robozunaverse. Keeping these in mind, we can expect a renewal for the show eventually. However, since this renewal has not happened or been officially announced yet, it is difficult to pin a specific air date on next season, but our best guess is that Season 2 can release sometime in October or November, 2019.

There has been no official confirmation on the renewal status of the show yet. There is no indication that production, animation, or voice acting has started yet for the same and thus it leaves us with no promotional content (such as trailers or teasers) exclusively for another tentative season either. Fans will have to play the waiting game for the confirmation of season3, and stream the first two seasons online on Netflix. If you are just looking to dig into Robozuna for the first time, you can prime yourself up by watching the official trailer for the debut season above.