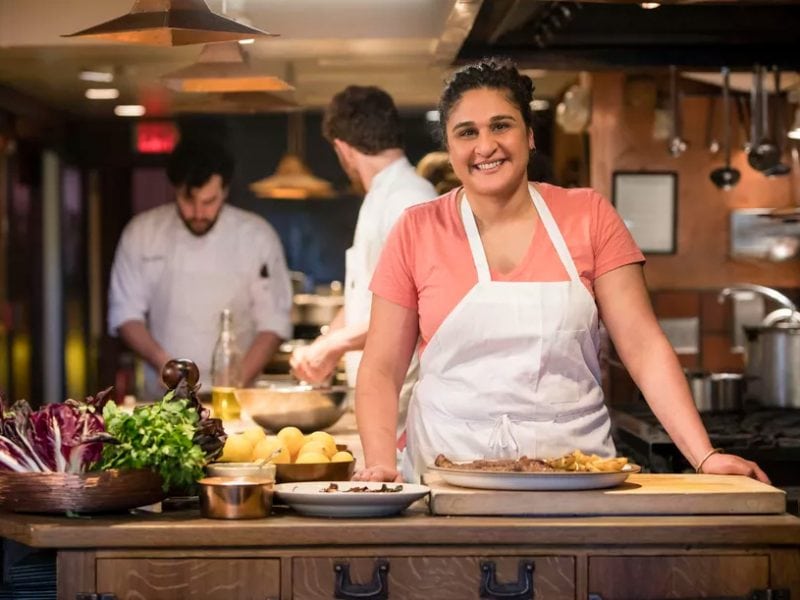 Cooking has been a recorded part of every culture for longer than even religion – the earliest cookbooks stem from 1700 BC Akkad. Let that sink in. Fast forward some three thousand years, and this predominant position has been held, immutably, by food in popular media for ages. The age of the internet has ushered in foodie culture as we know it today, but it has existed in a more esoteric form for centuries now.

Salt, Fat, Acid, Heat, a la Samin Nosrat’s contemplative insight about the practice of cooking itself, holds itself against the mirror of that culinary scholasticism. Normally, this would have come off as smug pedantry in many other departments of TV – but in a cooking reality TV scene oversaturated with game show clones, Netflix‘s Salt, Fat, Acid, Heat is a welcome breath of fresh air.

Let us get this out of the way: Salt, Fat, Acid, Heat is not an idea brought up by a Netflix-sponsored board of writers. It derives its name from a cookbook of the same name from the pen of Samin Nosrat (with illustrations from Wendy McNaughton). Granted, the book did get the title of a New York Times Best Seller, and won several awards the following year – Netflix’s documentary is more about Samin Nosrat’s philosophy of food rather than a strict adaptation.

Naturally, Netflix has also chosen Samin Nosrat herself to be the host of their docuseries – the thought of a universal cooking diction that it documents, after all, is Nosrat’s personal findings. This show is not the first TV gig for Nosrat either. The California-born author and chef had previously played a vital part in Michael Pollan’s 2016 Netflix docuseries, ‘Cooked’.

In light of all this, it would be imperative to get Nosrat on board as the host again if the docu-series happens to produce a season 2 – delegating this role to someone else would be out of the question.

Salt, Fat, Acid, Heat Plot: What is it about?

Roughly at the same time, the reality TV boom of the 90’s happened, the march of one legendary cooking show after the other had flatlined for about half a decade – before it was reborn, merged with reality TV game shows. To be fair, the formula of it preceded the onset of modern reality TV, but the Buddy Valstra, Guy Fieri, and their iconic blend of game shows and every edge of the cooking spectrum – from smoking steak to baking cakes.

Today, however, the cooking game show is a niche filled to the brim with shows that are virtually carbon copies of each other. It is therefore always a relief to see the more side-lined aspect of cooking on TV, the exploration cuisine in various cultures, make a return in the form of docu-series. Now, these have developed a set of their own cliches over a relatively small amount of time. The docuseries centring around a flaneur-foodie on the prowl will have the commonplaces of the smooth knife-through-cheese and slow-motion-salt shots, and then some obligatory panorama of a Japanese Fishmarket, or a cosy Italian cafeteria next to a bistro.

Nosrat’s Netflix show also checks these boxes – but the waters of her show run deep. Salt, Fat, Acid, Heat is a different kind of show: it proffers a novel idea of a universal principle of good cooking. Likewise, the four-part documentary explores the four elements that author-host Nosrat thinks determines how good a dish will be (irrespective of cultural and contextual background) – each part explores one of salt, fat, acid, and heat. This makes the possibility of a season 2 unlikely since the show has a very well-structured and complete approach to its subject, a point which marks the end of any good documentary.

Salt, Fat, Acid, Heat Season 1 premiered on October 11, 2018, and has since garnered a decent viewership. Critics and fans alike lauded it because of its genuine feel-good nature and meditations on the philosophy of cooking. The fact that the four-parter explores each of Nosrat’s projected vital elements of cooking in an organized way lends it a very cohesive structure, but sadly also curtails the possibility of a direct follow-through.

By that, we mean that it is very likely that Nosrat will be coming back on TV before long, but possibly with a different show. Salt, Fat, Acid, Heat closes down its narrative in a very well-rounded manner, and this means there are very slim chances for a sequel (even leaving aside the fact that it is more of a miniseries). All speculations aside, officially the show has neither been cancelled nor renewed by Netflix, leaving a season 2 release date TBD. Optimistically speaking, there’s a slim chance of rSalt, Fat, Acid, Heat Season 2 coming back in 2020.

We have received no news of renewal for Salt Fat Acid Heat from Netflix yet, and are on the look-out for updates just like you are. While you wait for news though, you can always watch the first two seasons if you still have not caught up with the show. We would recommend watching it if you have got an evening free since it is just 4 episodes long – here is a trailer to get started.