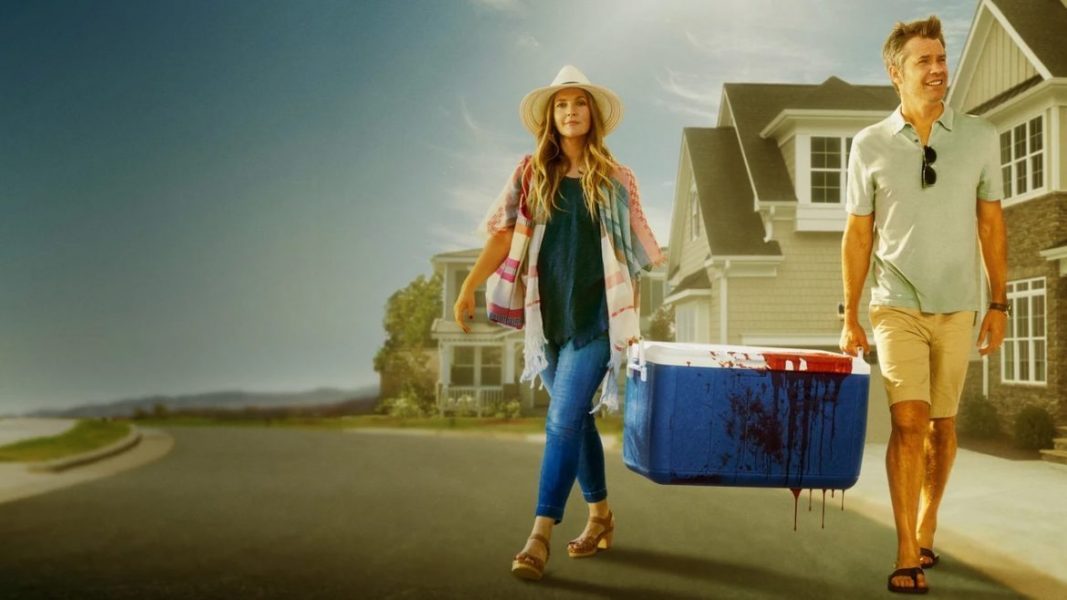 ‘Santa Clarita Diet’ made a really impressive debut in its maiden season and got the netizens talking. The show’s unique setup and storyline engaged a wide audience that has seen its popularity go off the charts. The show stars Drew Barrymore and Timothy Olyphant as a seemingly normal couple, whose life as an idyllic family takes an interesting turn when one of them embarks on an unexpectedly life-changing journey.

Santa Clarita Diet Cast: Who is in it?

One one of the best aspects of Santa Clarita Diet is its cast. The central protagonists are played by Drew Barrymore as Sheila Hammond and Timothy Olyphant as Joel Hammond, Sheila’s husband. The couple’s daughter, Abby, is played by Liv Hewson, while Skyler Gisondo plays Abby’s friend Eric. When a show has a star like Drew Barrymore as its main lead, half the job of the creator is already done.

Santa Clarita Diet Plot: What is it about?

The horror-comedy show essentially revolves around Sheila, Joel, Abby, and Eric. A middle-class family living in Santa Clarita, California, the Hammonds’ normal life (and incidentally, Eric’s), takes a vicious turn after Sheila gets inflicted with a mysterious sickness and starts craving human flesh. While the Joel, Abby, and Eric try to keep Sheila’s gradual deterioration into a zombie at bay, and try to help her find a cure, they have contend with neighbors, societal norms, anti-zombie task forces, and even a neo-Nazi baseball team.

The entire episode starts when Sheila one day starts vomiting violently, and ends up throwing up a fleshy red ball. Subsequently, Joel and family discover that she has no heartbeat, her blood is thick, and she craves human flesh. As they try to help Sheila through the unearthly ordeal, things take a turn for the worse (spoiler ahead) when their neighbor, Gary, tries forcing himself on Sheila, who then kills and eats him. Things get more complex after Gary’s death, as Sheila keeps deteriorating, and the bewildered and stressed Hammond family have to keep up appearances.

As the plot progresses, the mystery around Sheila’s sickness starts to clear, and the Hammond family also identifies a potential cure. However, their efforts at trying to help Sheila face multiple complications, especially with the arrival of a mysterious couple, who seem bent on destroying zombies. Meanwhile, the show also does some myth-building around the red fleshy orb Sheila throws up – something that is later referred to as ‘Mr. Ball Legs’ (we’re trying not to give away too many spoilers).

As it stands, the plot has reached a stage wherein the show is likely to reveal more details about the mysterious couple. Further, several deep questions about Sheila and Joel’s marriage have also reared their heads in Season 3. While the couple, like most married couples, had had their differences in the previous seasons, these were relatively superficial ones. In the third season, a particularly pertinent relationship challenge arises when the couple realizes that Sheila, being a zombie, can live forever as opposed to Joel, who is a mere mortal. While this is definitely an interesting challenge which Season 3 explores, it also ties up several loose ends from Seasons 1 and 2. Additionally, Season 3 also explores the lore behind ‘Mr. Ball Legs’ and sheds more light on its nature.

In terms of reception, Season 1 of ‘Santa Clarita Diet’ was praised particularly by critics for being a fresh take on the much popular zombie genre – it was “Certified Fresh” by Rotten Tomatoes, and received a score of 78%. Season 2 of the show found even more favor among critics, receiving a score of 85%. Season 3, however, topped all previous seasons, and bagged a perfect score of 100%, with the critics consensus reading, “Santa Clarita Diet’s third season is a generous meal of entrails, morbid humor, and a touching affirmation of marital love — with Barrymore and Olyphant’s pitch-perfect chemistry brightening each blood-soaked installment.” Overall, the show has a score of 89% on Rotten Tomatoes. Meanwhile, audiences have rated the show a solid 7.8/10 on IMDb.

Santa Clarita Diet Season 4 Release Date: When does it premiere?

‘Santa Clarita Diet’ Season 3 of the show premiered on March 29, 2019. As far the next season goes, we have bad news for the fans. On April 26, 2019, Netflix announced the cancellation of the show. So, unfortunately, there won’t be  ‘Santa Clarita Diet’ season 4. The decision comes as a bit of a surprise given its strong reception and and the fact that the series is owned and produced in-house at Netflix.

“The world had never known a ‘zom-com’ until Santa Clarita Diet,and we’re indebted to creator Victor Fresco for bringing this idea to Netflix,” Netflix said in a statement. “To their endless credit, the incredible Drew Barrymore and Timothy Olyphant were totally game, with an uncanny knack for comedy that brought Sheila and Joel Hammond to vibrant life, even though one of them was undead. We’re grateful to Victor, Drew, and Timothy, along with fellow executive producers Tracy Katsky, Aaron Kaplan, Chris Miller and Ember Truesdell and the terrific cast, including Liv Hewson and Skyler Gisondo, and crew for three hilarious seasons for Netflix members to discover for years to come.”

Check out the season 3 trailer below to refresh your memories. If you haven’t seen the show yet head over to Netflix to catch all the episodes of the previous seasons