Will There be a Scarborough Season 2? 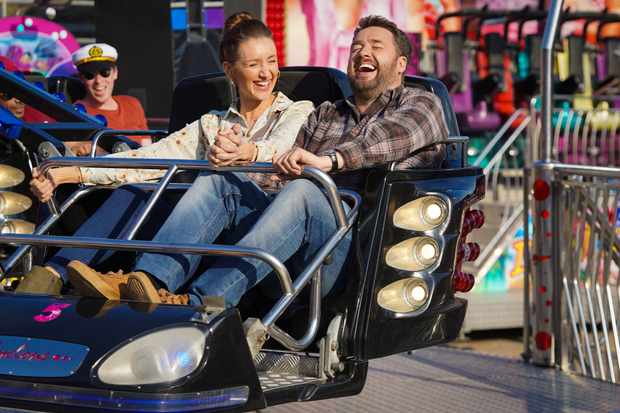 ‘Scarborough’ is a British comedy-drama that derives its name from where the story is based, i.e Scarborough, a seaside town located in North Yorkshire, England. It airs on BBC One and follows the lives of a group of friends who meet for karaoke in a certain pub each Friday night.

Written and directed by Derren Litten (Benidorm), it introduces us to Karen (Catherine Tyldesley) and Mike (Jason Manford), a couple in their late 30s who attempts to give another chance to their relationship after five years. Mike had harbored ambitions of doing something in the entertainment world, because of which he could not give enough time to his home. As a result, he and Karen eventually started falling apart. However, they start rekindling their romance after getting together with a bunch of colleagues and friends to share some drinks at a local pub while performing karaoke.

Although the series is branded as a comedy and brings in some amazing locales, featuring tropical landscapes and a seaside town, it did not manage to stay up to its concept. In fact, audiences claimed that the story lacked its primary element — humor. With a mere 5.9 score on IMDB, ‘Scarborough’ received not so favorable reviews from critics as well. After its launch, Sara Wallis from The Daily Mirror said, “This soap opera-style comedy was not my cup of Yorkshire. But let’s hope it warms up.” Emily Baker, who writes for The I, stated, “BBC One’s new comedy Scarborough is missing one key element – humor. Scarborough’s complete lack of laughs is more frustrating than upsetting.”

Adding to this, on a slightly uplifting note, Michael Hogan from The Daily Telegraph explained that the show “not an unqualified success” but it did offer “a promising start.” Creator Derren Litten did conceptualize the project on a unique note. He described the comedy to be different and explained, “Even though I’ve stuck close to themes I clearly love – the seaside, pubs, and karaoke — Scarborough is unlike anything I’ve written before. I’m genuinely flattered by the caliber of actors my scripts have attracted and I can’t wait for BBC audiences to get caught up in the laughter, love, and intrigue I’ve created, all set against the backdrop of this beautiful North Yorkshire fishing town.”

In short, we can say that this British sitcom opened to mediocre reviews. But those who loved it ended up praising the performances, especially that of Claire Sweeney as Hayley Cox — with The Guardian claiming that, “Sweeney brings some powerful energy as the local man-eater.”

Now, the next question is, in spite of its mixed reviews, will BBC be renewing the series for another season. Or, will there be a ‘Scarborough’ season 2? Let’s find out.

‘Scarborough’ season 1 premiered on September 6, 2019, on BBC One. After airing for six episodes, It wrapped up on October 11, 2019. It used to be aired during the 9:30 pm slot on Friday nights throughout the months of September and October.

The first episode opened to 2.83 million viewers, which then dropped to 2.2 million by the end of its sixth and final week.

Now, as far as a second season goes, it would be disheartening for fans to know that BBC has not given a go-ahead to the series. The channel pulled the plug on the show just after one season — a piece of news that was confirmed by Maggie Ollerenshaw (portraying the role of hairdresser Geraldine), who posted a Tweet saying, “Devastated to hear @Scarborough is not being recommissioned by the BBC. Best TV comedy I’ve ever been part of & best public response I’ve ever had to a character I’ve played.”

Additionally, BBC released an official statement stating, “Sometimes we have to make difficult decisions to make room for new comedy on BBC One. We are very proud of Scarborough and would like to thank Derren and the team for all their hard work on the series.” To wind things up, even the show’s Twitter account said: “Today we learned the BBC has decided not to recommission Scarborough for a 2nd series. Obviously we are all extremely disappointed but we’d like to thank all our fans for their wonderful support. You can still enjoy Scarborough on BBC iPlayer for another 10 months.”

So, there you go! ‘Scarborough’ season 2 stands cancelled and BBC has no intention of continuing the story any further as of now.