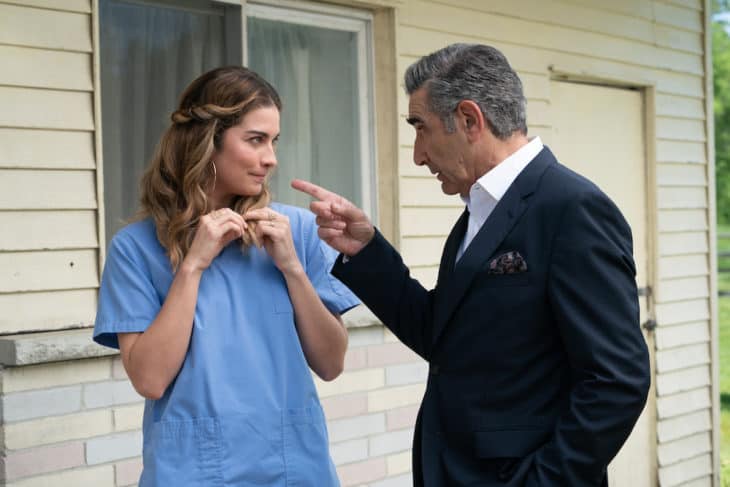 ‘Schitt’s Creek‘ is a currently running sitcom with probably the best portrayal of character development. Its central protagonists, the Roses, have come a long way from being privileged, uppity brats. In its final season, their journeys seem to be inching towards a conclusion as fans can attest to the fact that each one of them has become a different person.

Yet, the only constant is change and the Canadian sitcom persists in presenting tiny tweaks and moments of growth to its beloved characters. The show follows a wealthy family who loses all their possessions and is forced to move into a tiny, ugly village. It is created by the father-son duo, Dan and Eugene Levy who also star as father and son on the show.

Schitt’s Creek Season 6 Episode 10 Release Date: When Does it Premiere?

The tenth episode of the sixth season of ‘Schitt’s Creek’ is scheduled to premiere on March 10, 2020 at 9/8c on Pop TV. The episode is titled ‘Sunrise, Sunset’ and returns one week after the ninth episode of the season was aired. The show follows a weekly format with each new episode slated to be released every Tuesday.

You can watch the tenth episode of the sixth season of ‘Schitt’s Creek’ by tuning into Pop TV during the time slot mentioned above. Otherwise, you can also catch it on the Pop TV website or the Pop Now app if you have a valid cable provider’s login.

The ninth episode of the sixth season of ‘Schitt’s Creek’ returns after the heartbreaking breakup of Ted and Alexis in the previous episode. Alexis is still recovering from the breakup and the rest of the Roses are worried about how she is handling it. She has already started to see other guys and the family thinks that it is not the healthiest response.

David, Moira and Johnny meet Alexis’ new boyfriend, Artie who is a much older man. He is almost Johnny’s age and possibly, older. Alexis tells Johnny that she is going to Artie’s birthday party at his ex-wife’s winery with the rest of his family.

Alexis and Artie have to stop at the diner before a date. Johnny manages to speak with Artie alone at this time and tell him about Alexis having recently ended a serious relationship. As a result, Artie breaks up with Alexis. At home, Johnny tries to console a heartbroken Alexis. When she finds out that her father spoke to Artie, she is upset over him meddling in her life. Johnny tells Alexis that he probably became overprotective because he hadn’t been there for her in the past.

On the other hand, Moria’s car gets egged. After talking to Stevie, she comes to the conclusion that someone might be targeting her due to her newfound fame after the success of ‘Crows.’ She heads to the town council to get something done about it. At the council, Ronnie and Roland tell her that several people in Schitt’s Creek have been offended after she told People magazine in an interview that the town was the last place one would want to end up in.

Moira tries to apologize to protestors who are upset with Moira’s words. Her apology does not help. So, Ronnie suggests that Moira star in a tourism video for the town.