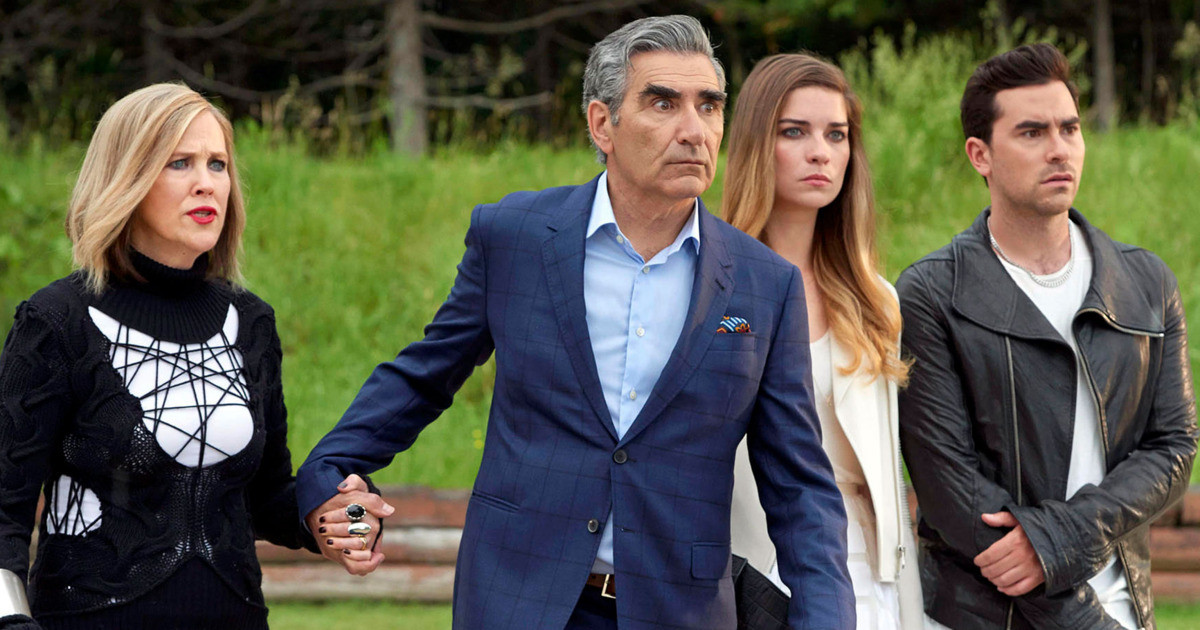 ‘Schitt’s Creek’ is one of those rare forms of comfort-tv comedies that follows the once-wealthy Rose clan. Forced into bankruptcy, the fam takes shelter in their last asset, Schitt’s Creek, in a rural town. The fish-out-of-the-water brilliant Canadian sitcom, over the last six years, has progressed to garner multiple Emmy nominations as well. With a strong base of loyal fans, its sixth season landed in 2020. So its dedicated viewers are curious to know if there will be a ‘Schitt’s Creek’ season 7. Here’s everything we know about it.

The riches-to-rags comedy, when it first launched in 2015, follows the Roses (Johnny, Moira, David, and Alexis) arriving as exiles in a small town and struggling to survive — after losing all of their fortunes. And over the last six seasons, the family has managed to scrape their way through multiple challenges — finding work, love, and friendship along the way. The sixth season’s finale showcases how the fam truly comes together after having first reached Schitt’s Creek as strangers.

Yes, the story wraps up beautifully in the last episode of season 6. In fact, creators Eugene Levy and Daniel Levy had started planning its conclusion when the show received a two-season renewal in 2018. In an interview with Variety, Daniel said: “I at no point wanted to compromise on quality or storytelling. It just didn’t feel like it was worth the risk to take it any further.”

Following season 4’s conclusion, Daniel knew that the series would wrap up after two more seasons. He added: “The goal was at the end of this show, this family will realize the value of love. Money can temporarily bandage a lot of things. But they would never be able to buy the kind of closeness that they have by the end of the series.”

In short, ‘Schitt’s Creek’ was never meant to run beyond its sixth edition. The creators had already made up their minds a long time back. They did not want the show to be a stretch. As summarized by Daniel in an interview with The Hollywood Reporter: “Season six felt like a great time to end on a high note with our fans and to give them exactly what they wanted without overstaying our welcome.” So yes, officially, ‘Schitt’s Creek’ Season 7 stands canceled. And it’s unfortunate that the drama decided to say its farewell at the peak of its popularity.

However, on a positive note, Dan also said that he does not think he will ever be able to close the door on the show. There’s a strong possibility that if necessary, the makers might revisit the characters down the line in the form of a movie or a holiday special. After all, ‘Schitt’s Creek’ has progressed to become a treasured classic and it would be an injustice if fans don’t get an update on the Roses in the next couple of years.