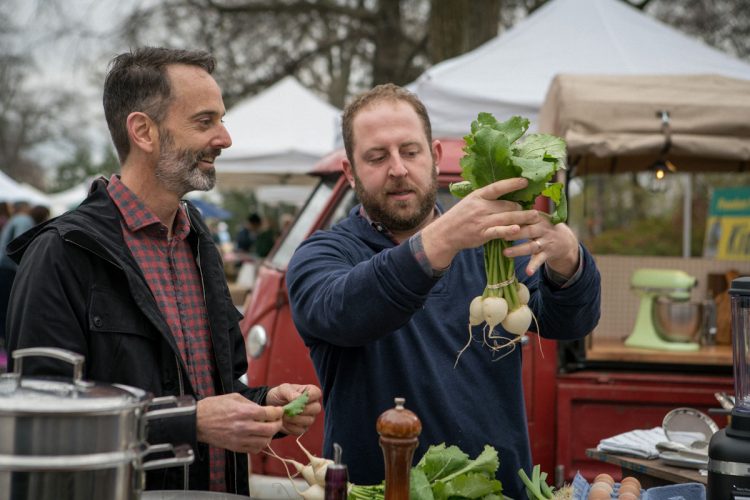 Scraps is a new innovative cooking show hosted by Sur La Table national chef Joel Gamoran. It first premiered on May 21, 2017 on FYI TV. The show is produced by Katie Couric via her Katie Couric Media and RAIN for FYI.  Its collaborative, digital format was developed by production partner RAIN, a NY-based digital consultancy. The executive producers for RAIN are Timothy Whitney and Brian Edelman. Whereas for FYI, Gena McCarthy and Jordan Harman serve as executive producers. The show ran successfully for the first season and returned for its second season on October 11, 2018. Both the season consists of 10-half an hour episodes where the chef scours the country while collaborating with other esteemed chefs to create mouthwatering dishes using food waste and scraps.

Scraps Cast: Who’s in it?

The host of the show is Joel Gamoran who is the national chef for Sur La Table. He is also an author of the book titled “Cooking Scrappy” that was published by Harper Wave in fall 2018. He is known for his recipes that are unusual and innovative, resulting in saving lots and lots of food that would otherwise go to waste. He has devised a myriad of recipes that involve cooking with fewer ingredients or ingredients that are normally termed as “food waste”. He believes in dishes and recipes that do not end up burning a hole in your pocket but are just as spectacular in their taste.

Scraps Plot: What is it about?

The show follows Gamoran as he travels to different cities to collaborate with some other amazing chefs and create incredible feasts in unexpected places out of the unthinkable ingredients (food waste and scraps). The show focuses on making use of everything that is edible and not harmful in any way to the human body and including it in the process of creating some amazing culinary masterpieces. It also advises the audiences to reduce the wastage of food and how it can be done. Joel is an “imperfectionist” who believes that perfection is overrated and that things should be a little imperfect. He has applied his philosophy of imperfection to his cooking style as well. All the food items that are assumed to be waste or scraps and are thrown away can be used to come up with some straightforward and mouth-watering dishes.

When Joel was asked to comment on the show in an interview, he said, ”Why does cooking always need to be so perfect?” he asks. “The best meals at home aren’t when you buy the expensive cut of meat. It’s the pasta with the leftover anchovy oil and some chilli flakes. Not having the fancy ingredients – it forces you to get inspired. I see flavour where the world sees waste.”

Every half an hour episode follows Joel in his 1963 Volkswagen bus to different cities where he prepares a meal with the local chef with their usual throw-aways and uses them to make a surprisingly delicious meal. He has used things such as pickle juice, shrimp shells, and broccoli stems to make miracles. In one of the episodes, he soaked Chicken thighs in the pickle juice before frying and drizzling it with a little bit of honey and showered it with cilantro(just the stems) for the garnish. The Broccoli steams are shredded to turn them into the sweet and crunchy slaw, and the oyster shells become a rich sauce for the oysters. He also shared his experience of how tough it was to sell the show even though it had a great message and innovative thinking. The networks did not think that the people would accept the premise of the show that dealt with education viewers as to how interesting it’d be to use what everyone thinks of as waste. But Joel and the co-executive producer Katie Couric stuck to idea till they turned it into reality. He believes that the recipes are super fun hacks and will save the people a lot of money.

The entire show; all ten episodes were filmed in merely six weeks as they got the orders to make the show on the first of February and were asked to present all the episodes by 21st of May. It was a tough task, but the team decided to really get scrappy and achieved the impossible. In their allotted six weeks, if it happened to rain, then they cooked in the rain. They also went along with it even if the recipe didn’t turn out up a good taste. He explained how it is actually a trial and error method. Some things work out really well put together while other things don’t. At times, it takes a couple of tries and a few changes to finally get the result you were hoping for in the first place. Gamoran believes that it is very satisfactory to turn something out of nothing or from something that has been deemed by the people as useless. In a strange way, the show is about hope.

Scraps Season 3 Release Date: When will it premiere?

There have been no official announcements on the renewal of the series as of yet. But we are sure that there are many more unique recipes we are still left to try. It is likely that the show will return for the third season. If it does get renewed, Season 3 can be expected to release sometime in 2020.

As there have been no announcements for the third season, there are no trailers or promos released for it as well. You can get a glimpse of the culinary adventure so far below.