Where to Stream Seinfeld? 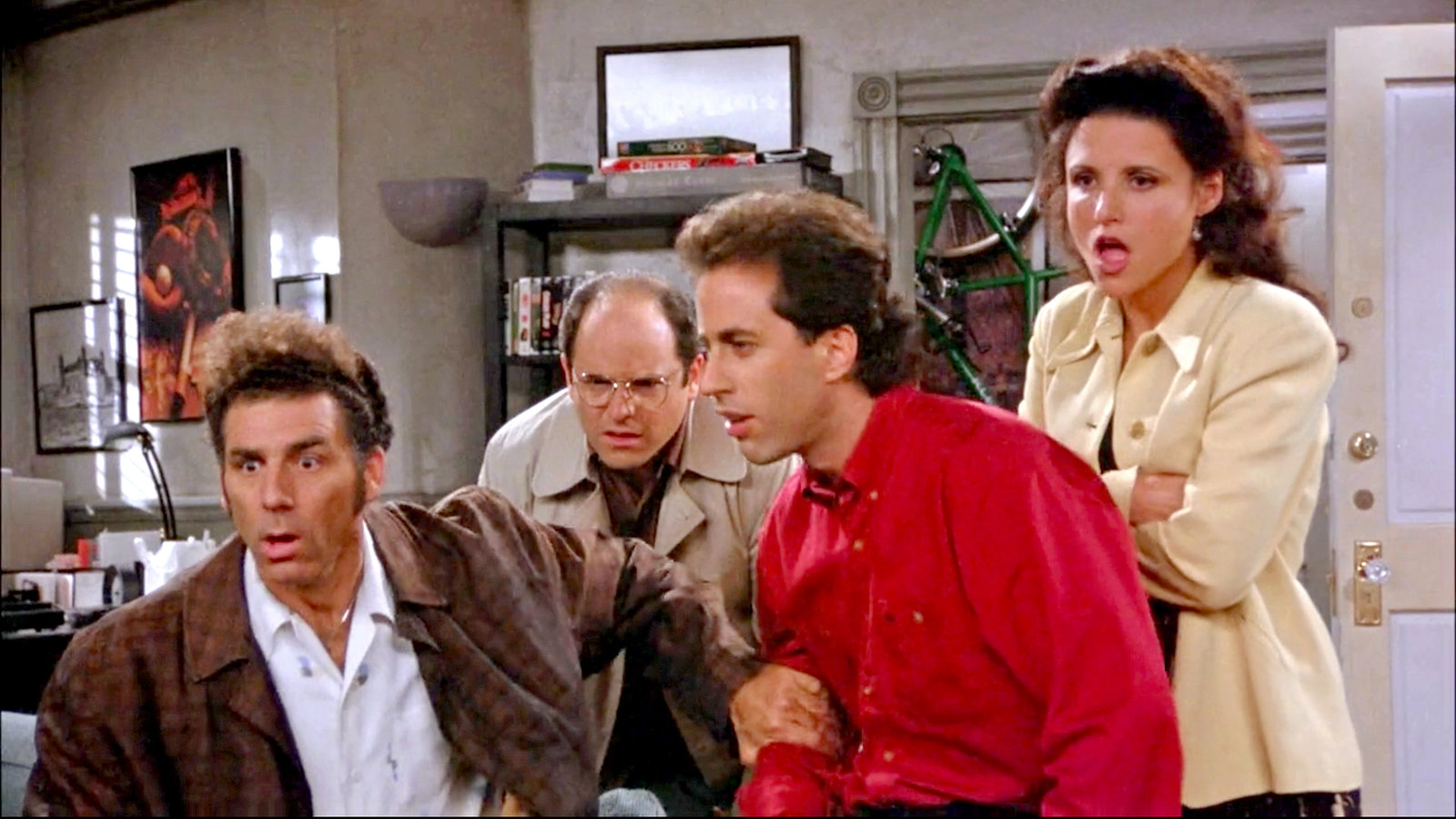 If you are looking for a show that has revolutionized sitcoms, look no further than NBC‘s ‘Seinfeld’. The series came out in 1989 and ran for 9 seasons till Jerry Seinfeld, the co-creator, turned down a hundred million dollars to do the tenth season. The premise of the series has Seinfeld starring as a fictionalized version of himself as it focuses on his personal life, as well as the interactions and acquaintances with several people in his life, including George Costanza, his best friend, Elaine Benes, his friend who used to be his girlfriend, and Cosmo Kramer, the neighbor who lives across the hall. Shot mainly in an Upper West Side apartment in Manhattan, ‘Seinfeld’ is often said to be a show about nothing, as it focuses a lot on the minute details of everyday life.

Guided by Jerry Seinfeld’s distinctive wit, the series has gained immense acclaim over the seasons and is considered to be one of the most influential shows of all time. Over time, ‘Seinfeld’ has become an indispensable part of popular culture. Naturally, now you must be wondering where to see ‘Seinfeld’. We are here to tell you that, but first, let us walk you through the plot.

What is Seinfeld About?

Since ‘Seinfeld’ is more about the characters, they are the driving force behind the show. As for occurrences, the series deals with small things that happen to them in everyday life. First off, we have Seinfeld himself. Jerry Seinfeld appears in a fictionalized version of himself and we see him as a minor celebrity, who is a stand-up comedian. He is depicted as the voice of reason that emerges from the insanity that comes from the people of his world. Seinfeld’s character is a mild germophobe and is freaky about neatness. We see that he is an avid fan of Superman, breakfast cereal and the New York Mets. Jerry’s apartment becomes the focus of the show as most of his friends visit it, resulting in humorous interactions.

Next up, we have Jerry’s ex-girlfriend, who happens to be a good friend of his. She is slightly impulsive and occasionally arrogant. However, overall, she is a genial and attractive person with a sense of humor. She is sometimes too honest with people, which can get her into trouble. Most of the times, she finds herself caught up in the quirks of her boyfriends, the unusual practices of her employers and maladjustments of complete strangers. Humorous situations arise in her life due to the poor choices she makes regarding the men she dates. Notably, Seinfeld and co-creator Larry David, have said that the character of Elaine is based on the amalgamation of their real-life girlfriends in the early days of their career as struggling comedians.

This brings us to Cosmo Kramer, Jerry’s neighbor, who often bursts through the door into his apartment. The character was based on an actual neighbor that Larry David had when he was starting off as a comedian in Manhattan. Kramer is sometimes shown to be gullible and naive, while at other times he comes across as well-read, intelligent and understanding. His success is often exaggerated and the character is laid back. Despite having no steady job, Kramer never has a shortage of money and his crazy schemes lend humor to the series. Finally, we have Constanza, Jerry’s best friend on the show. He is miserly, petty and jealous of other people’s achievements due to insecurities about his own capabilities. Constanza also lies very easily. Despite coming across as an unlikable character, he is shown to be Jerry’s friend since high school. He is loyal to his friends and enjoys immense success with women.

While the popular notion is that ‘Seinfeld’ is a show about nothing, the co-creators maintain that their intent was to show how and from where a comedian gets the source of their material. Thus, several of the episodes on the show actually deal with the real-life experiences of the co-creators, which have been reinterpreted to suit the characters. At the time of its release, ‘Seinfeld’ went on to break many of television’s accepted norms and eschewed all nostalgia, which is strange for a sitcom. It also did away with portraying any blossoming relationship between Elaine and Jerry, instead, offering them no reconciliation. Over the episodes, the series has shed light on several tough topics and in many instances, the series becomes intensely meta. For example, there is a show within a show called ‘Jerry’, which is promoted by the characters. ‘Jerry’ is surprisingly similar to ‘Seinfeld’ itself. Due to these characteristics, ‘Seinfeld’ has been praised as a postmodern wonder. So now, without further ado, let us tell you where you can watch the series.

Is Seinfeld on Netflix?

Netflix has an amazing collection of movies and television shows but ‘Seinfeld’ is not among them. Though, the good news is — if you want to wait for a while — that ‘Seinfeld’ will be available on Netflix from 2021 onward. However, if you want to check out another wonderful sitcom, we recommend watching ‘Friends‘, which has become immensely popular over the years and is considered to be one of the best sitcoms of all time.

Is Seinfeld on Hulu?

Hulu has a fantastic collection of films and television series that the platform keeps making smart additions to, in order to stay ahead of the competition. Subscribers are in luck since ‘Seinfeld’ is available on the platform. Check it out here.

Is Seinfeld on Amazon Prime?

Amazon Prime has an enviable collection of movies and television shows that can perhaps only be bested by Netflix. While Prime subscribers cannot watch ‘Seinfeld’ as is, you can buy and stream the show. Each episode costs $2.99, while the entire season is available for $19.99. We recommend buying the entire season, to save money overall. Check it out here.

Where Can I Stream Seinfeld Online?

No subscriptions to the major platforms? No worries. You can still stream ‘Seinfeld’. Check it out on Fubo TV. Obviously, you need to have a subscription to watch it.

Where Can I Watch Seinfeld Online For Free?

Freeloaders are in luck since you can use the free trial periods of Fubo TV and Hulu to watch the series. However, we would urge you to pay for all the art you consume.