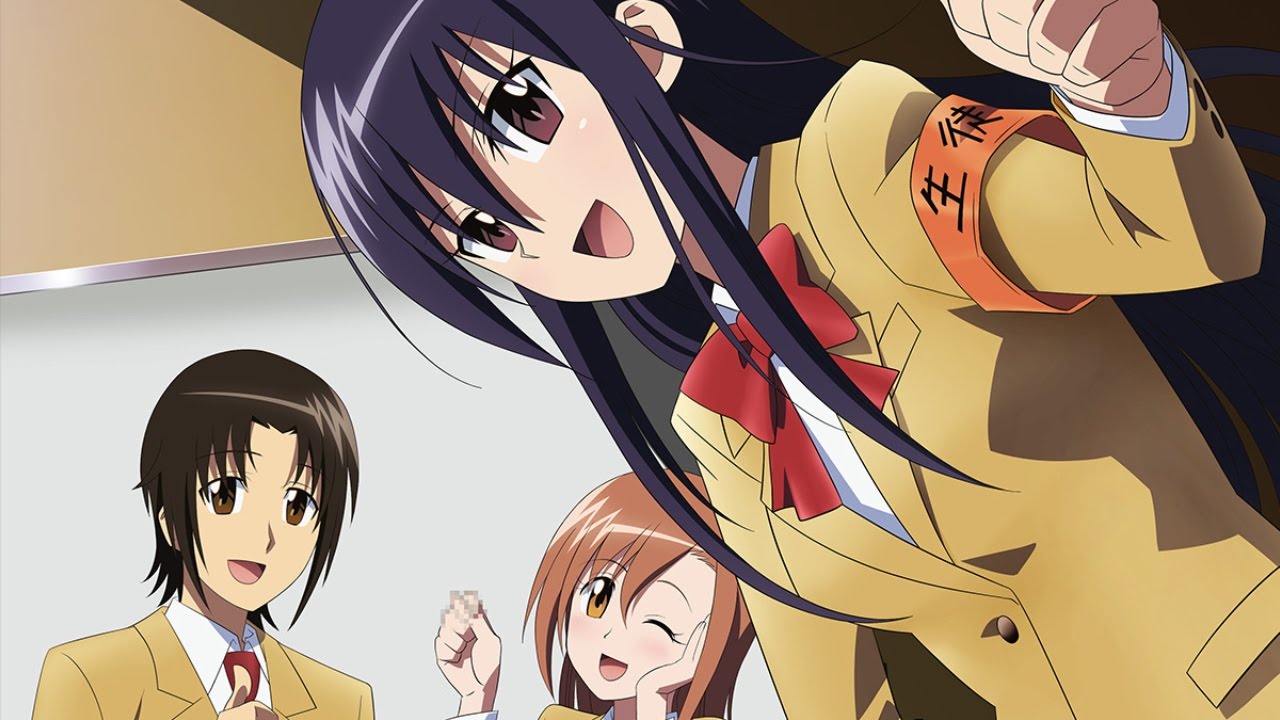 Wouldn’t it be every young teenage boy’s dream to step into a world where he is the only guy and is surrounded by the most beautiful young women? ‘Seitokai Yakuindomo’ is basically about one such teenage boy who is living the dream…but is he really? The premise of the anime is as simple as it can be; but it encompasses the most complex characters. Apart from the main male character, the girls are young, beautiful, charming, and goofy. The anime also dives deep into the complexities of their personalities by portraying their insecurities and fears, making this cookie cutter of a show quite an interesting work.

Most comedy anime don’t really care about the depths of their characters or story. ‘Seitokai Yakuindomo’ sets a standard on how exactly comedy should be executed. There are many other shows that directly use fanservice to bring out the lustful nature of their characters as well. But this show uses a very different method of portraying everything and it also adds a sense of realism. If you’re looking for a comedy show with deadbeat characters and a plot that lacks any kind of meaning, then you might want to turn in a different direction. But if you want to watch something deep, unique and hilarious at the same time, then ‘Seitokai Yakuindomo’ is indeed your best option.

Seitokai Yakuindomo Season 3 Release Date: When will it premiere?

‘Seitokai Yakuindomo’ Season 1 premiered on July 4, 2010 and came to an end on September 26, 2010. This was followed by an 8-episode OVA that was aired from April 15, 2011 to October 17, 2011.  Soon after this, a season 2 of the anime released on January 4, 2014 and went on till March 30, 2014. A sequel OVA of this season premiered on May 16, 2014 and with a total of 10 episodes, it is expected to end on Sep 17, 2020. Considering the worldwide popularity of the anime, ‘Seitokai Yakuindomo’ season 3 is definitely a possibility. And since the currently airing OVAs are just standalone stories or limited edition adaptations, they shouldn’t really hinder the progress of the main anime.

It is safe to say that an anime of such high caliber still has a long way to go. But since there have been no announcements regarding its renewal yet, our best guess is that ‘Seitokai Yakuindomo’ Season 3 release date could be sometime in 2021. Till then, you can always watch the side story adaptations of the anime or read the 4-Koma Manga.

You can watch ‘Seitokai Yakuindomo’ on Crunchyroll and HiDive with its original Japanese audio and English subtitles.

They say change is the only constant thing; this could not have been a more appropriate statement for the student council of the Ousai Private Academy. Year after year passes by and new members are added to the council but nothing much changes: The President of the club, Shino Amasuka, is extremely perverted; the Secretary Aria still does not own a pair of panties. Even the treasurer of the club hasn’t grown an inch and is still very petite, while the Vice President Takatoshi Tsuda has no clue what’s going on around him in the club full of the craziest antics.

But confining the group to just four members soon gets a little boring and though they do mess around with other clubs as well, they are soon joined by new members, all of whom are girls. The club that was already full of insanity now turns into something that is at an absolute peak of madness. With all this sexual humor and endless absurdity going on around him, Takatoshi Tsuda has no choice but to toughen up and adapt to all the craziness.

Shino is a second-year student and also the student council president at the Ousai Private Academy. She has long dark purple hair and pinkish-purple eyes. She is a very serious girl and takes all of her subjects at school seriously. She is also quite popular but the only problem with her is that she is very perverted and even claims that the only reason why Takatoshi is in the club is that he might help her uncover some information that is not covered in health class. Aria always looks up to her and claims that she is really talented at everything but Shino just dismisses these compliments by replying that there are many other things she’s not good at. She really has a thing for Tsuda and often blushes when he compliments her. She also shows a lot of concern for him and tries to seek his attention a lot of times.

Suzu is a first-year student at the academy who serves as the treasurer of the group. She is really smart but is very sensitive about her body because she hasn’t grown an inch since elementary school. Many people joke about her childish appearance and also about how her height is never going to grow. This really pisses her off and that’s when she throws random tantrums of rage. She has an IQ of 180 and can also perform 10 digit calculations in her head. She also has a fear of the paranormal and any experience of that kind often leaves her all disturbed and shaking with fear. She really respects the President of the club but does not hold herself back when she has to call out the president for her acts of perversion.

Aria is another second-year student at the academy who serves as the secretary of the club and is also Shino’s best friend. Even her interests in a lot of things are very much aligned with that of Shino’s. She is insanely rich and has been pampered all her life. This is probably the reason why she is all laid back and does not bother knowing much about the world around her. She acts airheaded a lot of times and even makes a fool out of herself. She is considered to be a very cute looking girl with her long brown hair and beautiful light brown eyes.

Takatoshi is an ordinary high school kid who has no special talents and only joins the academy because it’s quite close to his home. He never really intended to join the Student’s Council but from the first day itself, an accident forces him to become a part of it. He is really tall compared to most of his peers and often helps the girls of the council in grabbing things that are out of their reach. On a few occasions, the girls of the club also notice that his muscles are quite solid and they make him do all the heavy work because he is the only guy with them. He slacks off and is quite laid back but not to an extent where his grades get too bad.