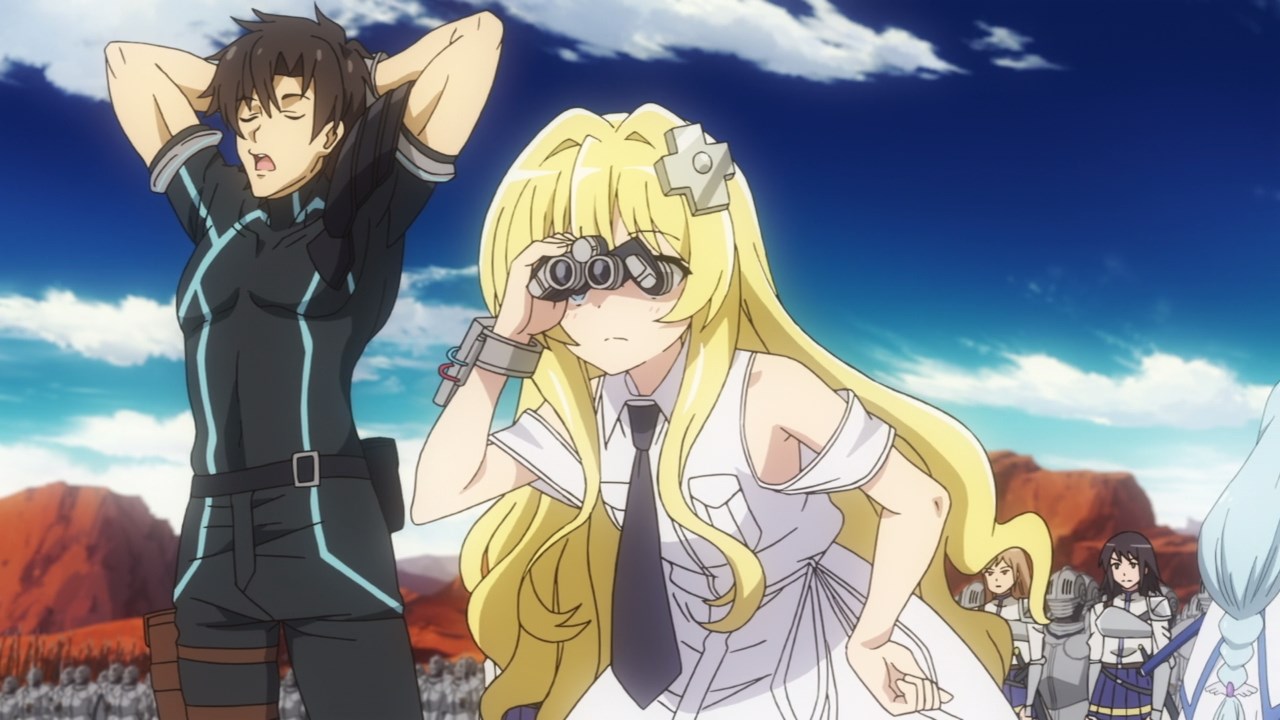 Based on Japanese light novel series, written by Natsume Akatsuki (‘KonoSuba’) and illustrated by Kakao Lanthanum, ‘Sentouin, Hakenshimasu!’ or ‘Combatants Will Be Dispatched!’ is an isekai anime with comedy, science fiction, and fantasy elements. It revolves around Sentouin Roku-gou or Agent Six, who is dispatched along with combat droid Alice by the diabolical Kisaragi Corporation on a mission to a world filled with magic and fantasy creatures. Kisaragi has already established its control over Earth and seeks to bring the entire known universe into the fold. And the Earth-like fantasy world is no exception. Once there, Six and Alice soon find themselves embroiled in a war between the Kingdom of Grace and the demon army, as Six tries to accumulate “Evil Points” and conquer the world for Kisaragi.

Following its premiere, the anime has received considerable praise for satirizing the RPG-based isekai genre. Season 1 of the show recently concluded. If you are curious about the prospects of season 2, we got you covered.

‘Sentouin, Hakenshimasu!’ season 1 premiered on April 4, 2021, and aired 12 episodes before concluding on June 20, 2021. Studio J.C.Staff developed the series in collaboration with Nippon Columbia and Kadokawa. Hiroaki Akagi helmed the directorial team, and Yukie Sugawara led the writing staff. As for the sophomore season, this is what we know. Neither J.C.Staff nor the creators associated with the project have yet made any official statement on the subject. But shows inspired by Akatsuki’s works are extremely popular among anime fans right now.

‘KonoSuba’ is widely regarded as the best parody isekai light novel series of all time and has served as the inspiration for a multi-seasonal TV anime and an anime film to date. ‘Kemono Michi,’ the manga series that Akatsuki has created in collaboration with illustrators Yumeuta and Mosuke Mattaku, was adapted for a TV anime in 2019. So, it’s likely a matter of time before the development of another season of ‘Sentouin, Hakenshimasu!’ is announced.

The renewal ultimately depends upon how popular the anime is and how many Blu-ray/DVD it sells in Japan. J.C.Staff has previously produced multi-seasonal runs of TV anime like ‘Bakuman’ and ‘The Disastrous Life of Saiki K.’ If the performance of ‘Sentouin, Hakenshimasu!’ manages to replicate those of the aforementioned shows, then it will likely get another season. Furthermore, 6 volumes of the light novels have been published to date, and only parts of the first 2 have been turned into anime, leaving plenty of source material for future adaptation.
Even if J.C.Staff doesn’t develop the next season, another studio can acquire the project and produce it. The next entry in the ‘Sentouin, Hakenshimasu!’ universe can also be an anime film. Again, it depends upon how successful the inaugural season ultimately ends up becoming. If the anime is renewed within the next few months, expect ‘Sentouin, Hakenshimasu!’ season 2 to come out sometime in 2022.

In the season 1 finale, Six keeps Russell and his colossal robot busy as Alice brings the most devastating weapon of the Kisaragi Corporation to the world, the Destroyer. With it, she destroys Russell’s robot. The chimera is subsequently handed over to the Tiger Man, who makes him wear a French maid outfit and oversees his water production. Elsewhere, Heine swears vengeance for her comrades, while Astaroth wonders if she should visit Six and Alice and help them. Meanwhile, Six declares that he will bring the world under his control and get a harem.

In season 2, with his Evil Points in the negative, Six must do something drastic, lewd, and diabolical to increase Kisaragi’s influence and control over the world. Episode 12 of the anime refers to ‘Undead Festival,’ which takes place in yet-to-be-adapted volume 3. So, expect the festival to be part of the storyline in the next season. The Kisaragi fortress might get destroyed because of Snow’s actions, prompting Six to call Lilith for help.