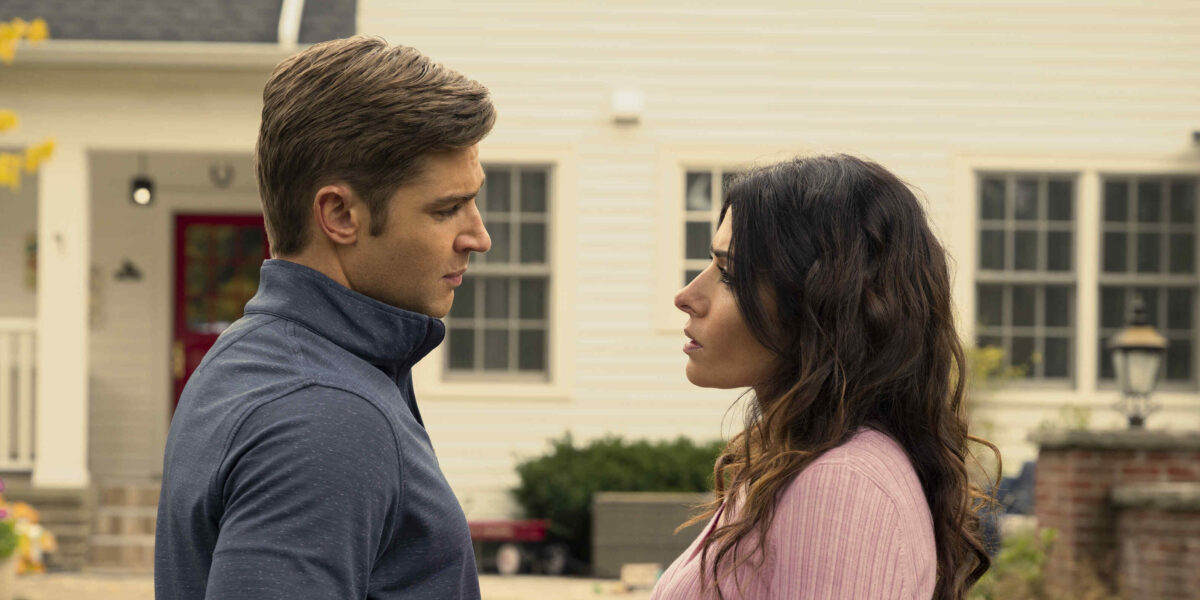 ‘Sex/Life’ is a drama series about a suburban mother of two who begins to realize that she wants more from life. Billie is married and has a loving husband, but for some reason, she cannot let go of the memories of her ex-boyfriend, Brad. Life begins to get complicated when Brad enters the picture once again. The romantic drama is inspired by BB Easton’s novel, ’44 Chapters About 4 Men.’ Created by Stacy Rukeyser, the series first premiered in June 2021.

The series has not been received well by the critics, who noted that the show would do better with solid content and characterization. Most people have been on the fence as far as the performances are concerned. Nevertheless, the series garnered a large following, possibly because of the steamy scenes and the intriguing plotline. If you have breezed through the first cycle, there is no doubt you are looking forward to more, especially with the cliffhanger at the end of the freshman season. Here is all that we know about a potential season 2!

‘Sex/Life’ season 1 released in its entirety on June 25, 2021, on Netflix. The first installment comprises eight episodes with a running time of 43-52 minutes each.

With regard to the second edition of the show, here is what we have found. Netflix is yet to make an official announcement, although a source claims that the show has already been given the go-ahead for another round behind-the-scenes. If reports are accurate, the team is also preparing to begin filming soon. It seems like a renewal is just a matter of time since the Netflix series featured on the streamer’s list of top 10 shows in several countries, including the USA, despite the disappointing response it received from critics. Moreover, the cast and the show’s creator have discussed the potential second season on several occasions.

Season 1 was announced in August 2019 and was scheduled to begin filming in Spring 2020. However, due to complications resulting from the pandemic, the cameras only began rolling in August 2020. After a few months, the filming was wrapped up in December 2020. So, if the show is recommissioned formally and the anticipated season begins filming in Fall 2021, we can expect ‘Sex/Life’ season 2 to release sometime in Q2 2022. This also makes sense because Netflix typically maintains a gap of about a year between two seasons.

Sex/Life Season 2 Cast: Who can be in it?

Season 1 leaves several things open-ended, which means we are likely to see most of the characters again. Throughout the season, Billie Connelly (Sarah Shahi) is torn up between her life with husband Cooper Connelly (Mike Vogel) and her exciting past with Brad Simon (Adam Demos). Sasha Snow (Margaret Odette) is Billie’s close friend who lives a single life.

Other significant characters in the show are Devon (Jonathan Sadowski), Caroline (Meghan Heffern), Trina (Amber Goldfarb), and Francesca (Li Jun Li). So, we can expect most of the actors portraying these roles to return for another round if the series is recommissioned. As the storyline continues, it is not unusual for new characters to get involved. Therefore, if another installment is greenlit, we will probably see some new faces.

Sex/Life Season 2 Plot: What can it be About?

In season 1, Billie begins to fantasize about her exciting life with her ex-boyfriend Brad, who had broken her heart many years ago. Life begins to get complicated when the possibility of getting back with Brad becomes real. After a lot of back and forth, Billie decides that she does not want to walk away from her marriage. In an unexpected turn of events, she goes to meet Brad. She tells him that she wants to stay married to Cooper but wants to continue a sexual relationship with Brad.

If there is a season 2, it will address the love triangle between Cooper, Billie, and Brad. We are yet to learn what Brad’s response is to what Billie proposes. Although Brad had hurt Billie in the past, he put his heart into their relationship this time around. Ironically, that is not what Billie wants from him now. In contrast, Cooper is not happy about his wife running back to her ex. He may decide to end the marriage or have an affair. After all, his boss Francesca has made it clear that she is interested in him. Either way, it looks like things are only going to get messier between the three of them.