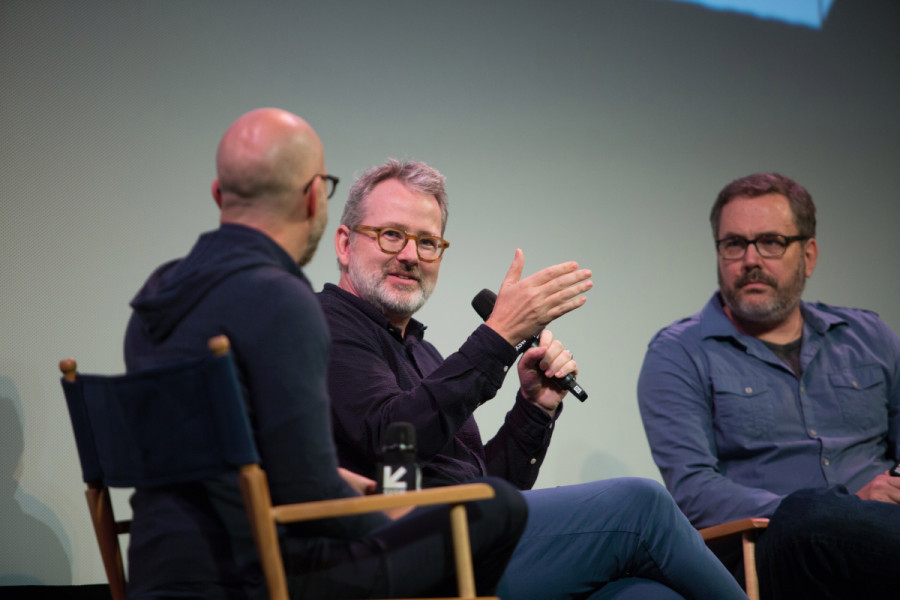 A photo from the SHOWTIME SXSW 2019 screening of SHANGRI-LA. - Photo: Thao Nguyen/SHOWTIME - SHANGRILA_SXSW2019_ 033.R.jpg Pictured: AUSTIN, TX- MARCH 11: Author Neil Strauss acts as moderator for directors Morgan Neville and Jeff Malmberg's film during questions and answers at the end of the film at the SXSW screening of Showtime's "Shangri-La" at the Paramount Theater on March 11, 2019 in Austin, Texas.

Shangri-La Cast: Who is in it?

Oscar-winning filmmaker and documentarian, Morgan Neville hosts ‘Shangri-La’ as he engages in creative conversations and detailed interviews with Rick Rubin and visiting musicians inside the serene estate by the beach-side. Rubin, who had founded Def Jam Records in the 1980s, is a phenomenal name in the realm of music and has been the main person behind launching and producing multiple hit albums for bands and singers alike such as Beastie Boys, Adele, Jay-Z, Johnny Cash, Eminem, Tom Petty and the Heartbreakers, Justin Timberlake, Black Sabbath, Public Enemy, Red Hot Chili Peppers, Run-D.M.C., Linkin Park, and System of a Down. He is also a multiple Grammy winner for Producer of the Year category.

Primarily recognized for his bearded look and unique interactions with artists, he is a completely different persona in the music industry. Rubin is often seen barefoot and is usually clad in plain, white t-shirts, working even with unconventional bands like ‘Slipknot’. He has a deep-rooted interest in transcendental meditation and magic. Hence, David Lynch and David Blaine also feature for an extended interview on one of the episodes. Recording artists appearing in the documentary are Tyler the Creator, LL Cool J, and The Avett Brothers, among others.

Shangri-La Plot: What is it about?

‘Shangri-La’ keeps Rubin’s iconic Malibu studio as the backdrop and focuses on creative conversations while highlighting the emotional aspect of music. Some of the phrases that appear as an intro for the docu-series are “Allow a different consciousness to enter” and “look deeper.” Yes, this reflective description definitely reflects the persona of Rubin, complete with calming visuals of waves crashing on the shores and glimpses of the vaulted halls of the studio. We also get to see both the interior and exterior facades of the studio, recording equipment, and artists like Ezra Koenig and and Flea who appear on the show, alongside other famed musicians. The famous phrase of Rubin, “Keep asking questions until you fully understand,” completes this ethereal picture.

“Giving viewers a taste of what it’s like to be produced by the music world’s most singular voice,” the documentary attempts to unravel Rubin’s incredible biography and dive deep into his fabled life. And hence, the entire series has been shot on antique anamorphic lenses, to bring in the vibes of white, misty frames. The story explores the interesting history of the Malibu clubhouse via interviews with new artists visiting to record. It also tries to cover how Rubin’s approach has transformed and evolved throughout the years since the 80s. As the episodes unravel, we also get to see a backstory of Rubin’s adolescence, his study of transcendental meditation, and his relationship with time as well as nature.

Focusing in all its entirety on Rubin’s personal metamorphosis, his adoption of a spiritual life, his closeness with nature, and even the devastating fires of 2018 on the estate, ‘Shangri-La’ is an altogether different experience. As per Neville, “The music is part of it, but you can’t make the music until you fix the bigger problems, and that’s always what Rick is focused on. I didn’t want to do just another music documentary. I wanted it to be a deeper [experience.]” Moreover, it is not just a biographical look into Rubin. It is about the complexities of all things involved that finally culminate in hypnotic sound.

Shangri-La Season 2 Release Date: When will it premiere?

‘Shangri-La’ Season 1 premiered on July 12, 2019 on Showtime. All the four episodes of the documentary aired on VOD and Showtime’s streaming services. Before this, a “work-in-progress” cut was screened at the 2019 SXSW Festival during March 8th-17th in Austin, Texas.

Now, as far as a renewal is concerned, it should be noted that this series was conceptualized as a four-part, all-inclusive miniseries. Therefore, the chances for another season seems bleak. However, if Neville decides to focus on some other music producer or performer for the next season then we can see another installment of the show. But nothing is certain as of now. We shall update this section when we learn more about ‘Shangri-La’ Season 2 release date.

Below is the official trailer for ‘Shangri-La’ Season 1. You can check it out below to understand what the series is all about. Additionally, you can also head to their official site if you wish check out clips from the show.