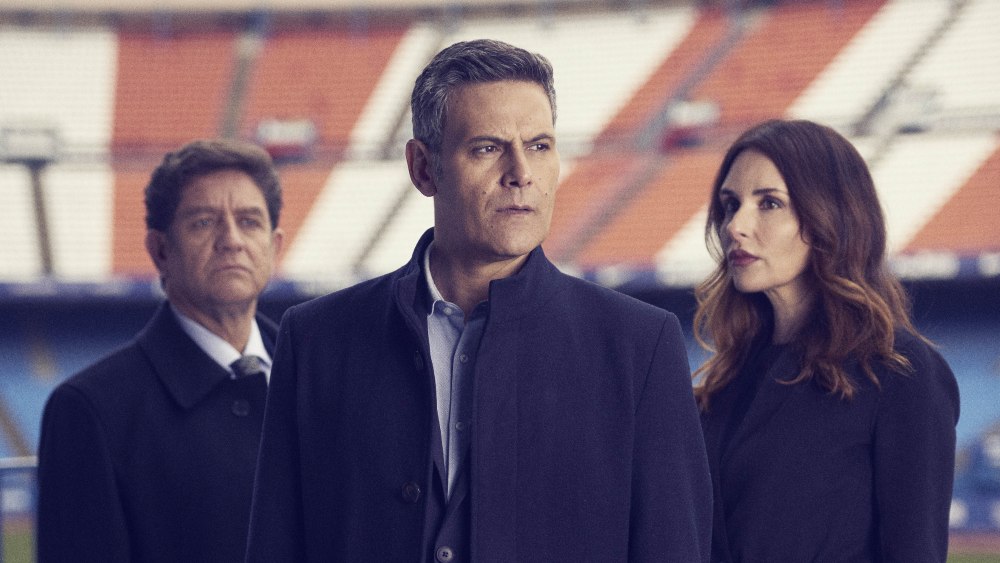 ‘Side Games’, originally ‘Todo por el Juego’, is a result of the collaboration between Spectrum Originals in the US and The Mediapro Studio in Spain. Produced by Mediapro, it is created by the famed screenwriter from Argentina, Eduardo Sacheri, who is a two-time winner of the Argentine Academy Award. He is well-known for writing the foreign-language thriller, ‘The Secret in Their Eyes’, which was an Oscar-winner. Directed by Daniel Calparsoro, who also features as the showrunner, it is an adaptation of the novel ‘El Fútbol no es Así’ — authored by Javier Tebas and Pedro Torrens. The series takes place in a fictional, top-league Spanish soccer association, where the events soon unfold into chaos, packed with illegal betting, political corruption, and violence.

Side Games Cast: Who is in it?

The cast of ‘Side Games’ is led by Patricia Vico who plays the role of Nuria Ballesteros and Roberto Enríquez who enacts the character of Mariano Hidalgo. Vico is a renowned Spanish actress, based known for her portrayal of Fifa in the comedy series ‘The House of the Trouble’. She has also featured in the medical drama ‘Central Hospital’ and the horror show ‘Rabia’. On the other hand, Enríquez is a Spanish actor, known for his roles in several films, theater, and television.

If the show is continued, all the main cast members are expected to make a return.

Side Games Plot: What is it about?

‘Side Games’, based on the novel ‘El Fútbol No Es Así’, is set against the backdrop of a fictionalized second division Spanish soccer league. It introduces us to an activist and successful businessman, Mariano Hidalgo, who is promoted to take up the position of team president. However, he soon finds himself in a scandalous world, packed with mob-controlled betting, political corruption, and murder. Meanwhile, he also has to tackle the issues in his own family life.

Formerly a provincial real estate entrepreneur and a huge supporter of the first division of the Spanish League, Mariano takes up the presidency purely out of devotion for the team. Although his intentions are good in the beginning, he soon finds himself embroiled in a path fraught with dark and unpredictable chaos. As his honest nature progresses to become more ruthless and ambitious, we witness how his thirst finally ends up threatening to destroy the things most dear to him.

Mixed with intrigue, suspense, drama, and passion, ‘Side Games’ gives an insight into the world of soccer, dominated by mafias and political scandals. To add to the mix, there are also family problems and gruesome homicides. With raw dialogues and great action sequences, it explores the underbelly of soccer through an inside lens. It lends a never-seen-before glimpse into sports and its connections with local politics and match-fixing agents. It also shows how the players get involved in the rigging of matches and the corrupt process of buying and selling foreign sportsmen.

If season 2 is commissioned, it is likely to follow Mariano’s complicated life entangled in corruption and drama.

Side Games Season 2 Release Date: When will it premiere?

After its debut in Latin America, the series received widespread acceptance among the audience, primarily because of the huge popularity of soccer in the region. The seamlessly written drama also garnered good level of acceptance among the Spanish-speaking populace in the U.S. It is a must see even for English-speaking viewers who hold a knack for sophisticated drama and a passion for soccer.

Now, as far as a renewal is concerned, we have not received any official update from the creators yet. With Spectrum Originals giving the show a global platform, we are p. But if the makers did leave some loose threads for the series to go positive about its future. If ‘Side Games’ season 2 does happen, it should release sometime in July, 2020. We will update this section as soon as we hear more.

Below is the official trailer for ‘Side Games’ season 1. You can also head to show’s official site if you wish to check out all the previous episodes.