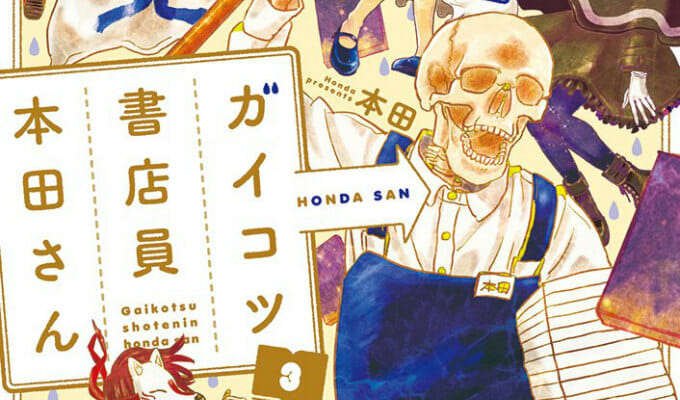 Skeleton Bookstore Employee Honda (also known as Gaikotsu Shotenin Honda-san in Japanese, or by its other name, Skull-face Bookseller Honda-san) is a comedy anime television series which is based on a manga series of the same name. Written and illustrated by Honda (not to be confused with the automobile brand), the manga series was first published on August 27, 2015 and ran till March 22, 2019. Towards the end of the lifespan of the manga series, a Japanese anime studio called DLE announced plans to adapt it into an anime television series. Subsequently, Season 1 of Skeleton Bookstore Employee Honda premiered on October 8, 2018, and it was a hit among fans of the manga series and new viewers alike. Since then, fans have been waiting to hear news on a second season, and here’s everything we know about Season 2 thus far.

Skeleton Bookstore Employee Honda season 1, consisting of 12 episodes, premiered on October 8, 2018 and ran till December 24 of the same year. While the season was being aired, an original net animation (ONA) special episode, titled Honda-san x Taka no Tsume, was released on November 3, 2018. Further, following the conclusion of Season 1, another original video animation (OVA) special episode was also released on February 27, 2019, much to the delight of fans.

For those who like watching anime shows in English, the bad news is that Skeleton Bookstore Employee Honda does not have a licensed English dub yet, perhaps owing to its modest budget. While fan dubs might exist on the internet, we’d advise you to avoid them since they’re generally of very low quality. However, given the success that Skeleton Bookstore Employee Honda has achieved, we would not be surprised if an English dub is licensed in the near future. While you wait, you can watch the original Japanese version of the show with English subtitles on Crunchyroll.

Skeleton Bookstore Employee Honda revolves around life in a bookstore with a particular focus on a bookstore employee called Honda, who happens to be a skeleton.

Despite his fearsome and hideous looks, Honda happens to be a veteran bookstore employee who has worked at the same store for the past 10 years. Owing to his familiarity with the workings of bookstores and the demands of customers, Honda is a revered employee at the bookstore he works in. Along with his eccentric co-workers, Honda works day in day out to ensure that the bookstore is running smoothly and all its customers are satisfied. Be it dealing with the drama of new titles arriving without the promised bonus material, or dealing with customers who don’t seem to know what they want, Honda is experienced in everything which goes down in a bookstore, and seems to thoroughly enjoy his job. The show thus follows his daily life at the bookstore as he looks to provide customers with the choices of book selections. Through episodic depictions of what goes on in a bookstore, the show not only acquaints viewers with the functioning of a bookstore, but also demonstrates that running a bookstore is far from easy work.

Despite its simple premise, Skeleton Bookstore Employee Honda has quite a few characters in it. Below, we’ve provided you with brief backgrounds on the characters who are important to the show.

Honda: The only main character in the show, Honda is a veteran bookseller, having worked at the bookstore for over 10 years. He appears as a human skeleton wearing the bookstore uniform, and is a specialist when it comes to recommending foreign comics and art books to customers. However, Honda’s only drawback is that he does not speak proper English, and has a tough time dealing with all the foreign customers who visit the bookstore.

Kamibukuro: One of the most important supporting characters in the show, Kamibukuro appears as a humanoid figure who has a paper bag instead of a head. Kamibukuro works at the same bookstore as Honda, and is in charge of the store’s manga section, including yonkoma manga. Among all the workers at the store, Kamibukuro considers Honda to be his closest friend.

Hōtai: Another important supporting character in the show, Hōtai appears as a humanoid figure whose face is covered in bandages. She works at the same bookstore as Honda and Kamibukuro, and is in charge of a section of books aimed at girls and young women.

Lantern: Another worker at the bookstore, Lantern is a woman with the head of a pumpkin, and is in charge of the section containing Shueisha magazines.

Armor: Distinguishable for wearing a Western war helmet on her head, Armor is the manager of the bookstore Honda works for, and is in charge of the section which sells books on homoerotic love, particularly boys’ love.

Pest Mask: Another important character in the show, Pest Mask is distinguishable for…well…wearing a pest mask which resembles the plague masks worn by doctors during the bubonic plague. Pest Mask is the section chief of the store, and while she can be extremely intimidating to book distributors, she is actually an extremely kind and caring woman at heart.