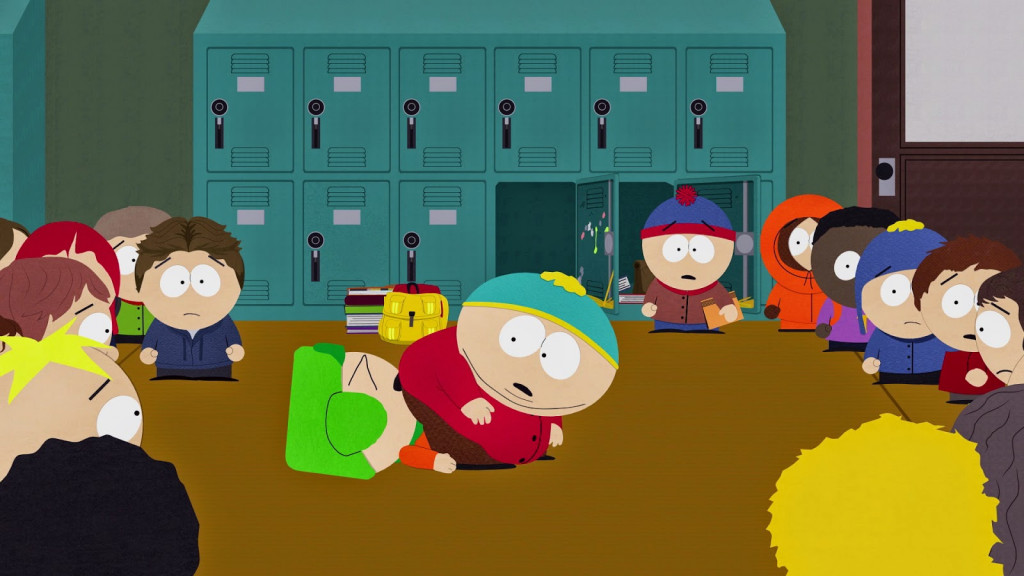 ‘South Park’ is an adult animated sitcom that airs on Comedy Central. The series first premiered on August 13, 1997. It has been created by Trey Parker and Matt Stone and developed by Brian Graden. The show is the highest-rated program of Comedy Central and is based on four boys-Stan Marsh, Kyle Broflovski, Eric Cartman, and Kenny McCormick. It is famous for covering a variety of subjects, which is told in a lewd and sometimes offensive language, which makes it suitable for adults only. Additionally, you get a heavy dose of dark humor mixed with some social satire.

‘South Park’ has been nominated for numerous awards over the years and its winnings include one Annie Award, five Emmy Awards, and a Peabody Award. It even managed to get an Academy Award nomination at one point. ‘South Park’ is the second-longest-running show of Comedy Central. It initially started with cutout animation, before moving on to computer-based animation. Needless to say that a show that has run for so long, is well-loved by fans and has a massive, loyal base. Critics too have loved the series and over time it has come to be considered as one of the greatest television cartoon shows of all time.

South Park Cast: Who is in it?

The cast of ‘South Park’ is led by the creators of the show, Trey Parker and Matt Stone, who are responsible for giving voice to most of the male characters of the show. Most of the female characters are voiced by April Stewart and Mona Marshall. Many celebrities depicted on the show lend their own voices to the characters, which include Michael Buffer, Brent Musburger, Robert Smith, Cheech & Chong, Malcolm McDowell, Jay Leno, Jennifer Aniston, Jerry Seinfeld, George Clooney among others.

South Park Plot: What is it about?

‘South Park’ is concerned with various aspects of the world. In the same manner as shows like ‘The Simpsons‘, it is more about the characters than the story. The show follows the exploits of four boys — Stan Marsh, Kyle Broflovski, Eric Cartman and Kenny McCormick — who live in the fictional small town of South Park, in the Rocky Mountains of central Colorado. The plot of each episode is more often than not set in motion by some specific event — it could be something typical or even supernatural. As the event unfolds, adult in the town panic, but the four boys act as the voice of reason. The motive is to show the boys as morally superior to the contradictory and hypocritical adults.

Season 23 is going to be no different from previous seasons. It will surely tackle some new issue but will remain full of profanity, and dark jokes. There will also be tongue in cheek satire and it will not hold anything sacred.

South Park Season 23 Release Date: When will it premiere?

Should You Watch South Park?

‘South Park’ has often been regarded as being singularly responsible for putting Comedy Central on the map. However, as it is with old school humor, it often faces flak, and ‘South Park’ has been no different. The show has been criticized for its utter disregard for conservative values, while at the same time, mocking of liberal sensibilities. When all of this is coupled with excessive profanity, toilet humor, and ease of access to children, one might understand why certain people feel uncomfortable and outraged at the show.

The show has also drawn the ire of major religions including the Catholic Church, and Islam as well for their depiction of Prophet Muhammad. However, we maintain, that a comedy show should not hold anything sacred. ‘South Park’ teaches us to laugh at all things including ourselves. In today’s world where people take offense at the drop of a hat, this is something we could try to remember. Over the seasons, ‘South Park’ has tackled issues including Amazon and Jeff Bezos, Donald Trump, school shootings in America, sexual abuse in the church, climate change deniers, cell phone dependency in our culture and the recent fad of vaping.

As viewers accompany the irreverent grade-schoolers in the town of South Park, Colorado, we realize that more than the dysfunctional nature of the town, the tone that remains dominant over the seasons is the utter irreverence towards all things. In the rebellious attitude lies a sublime hint of freedom, the madman’s escape by disregarding all things in society. It is not an easy theme to grapple with since it does not immediately jump out at the viewers. However, it lurks underneath the humor the show presents. Thus, consciously or unconsciously, we are all drawn to the desire to be irreverent, and thus free.

There is not much left to hope from a show that has continued to deliver quality content over the seasons and has only gotten better with time. The most we expect is that it continues making fun of each and every thing, person and establishment as it has done for so many years. We only hope it gets edgier moving forward. The world needs to have a laugh at itself, to ease up, and ‘South Park’ just might be the answer.

You can check out the trailer for Season 23 of ‘South Park’ below, to get an idea of what the show might have in store. If you have not seen the series and enjoy a good laugh, head over to Comedy Central to catch the previous seasons.