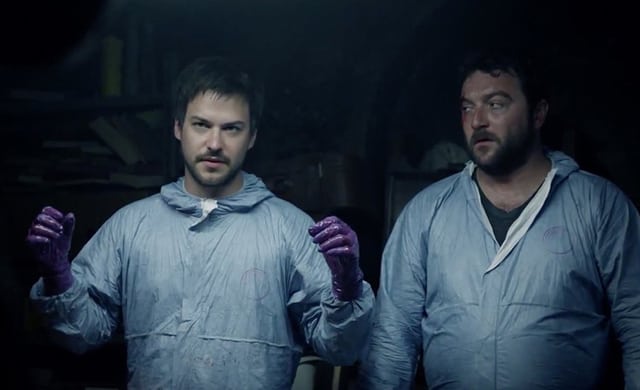 ‘Spotless’ is a dark comedy-drama series created by Ed McCardie and Corinne Marrinan and produced by Tandem Communications (Studio Canal) in association with Rosetta Media. The show is set in London and is about the life of a family man, Jean Bastiere, leading a content and quiet life with his wife and children. However, everything goes for a toss after he accidentally meets his outlaw brother whom he hasn’t seen or heard of for years. The past that Jean wanted to bury forever resurfaces. Bringing in a tasteful combo of satire and mystery, ‘Spotless’ debuted on Esquire in 2015 and was taken up by Netflix for its international distribution.

Spotless Cast: Who’s in it?

Spotless Plot: What is it about?

‘Spotless’ introduces us to Jean Bastiere, played by Marc-Andre Grondin, who is a police contractor in London and cleans up crime scenes. He loses his job one day, but fate presents him with the same job again. But this time, he has to work against the law as he is forced to help his long-lost brother (Denis Menochet) who arrives with the body of a dead woman in his van. Jean discovers that his brother is a willful defaulter and is full-time into organized crimes. The arrival of this estranged sibling brings bitter memories of the past that Jean wanted to get over with. Unfortunately, Jean gets entangled in the web of the criminal world. This puts him on the verge of losing his marriage as Julie has been suspecting him of being on the wrong side of the law for a long time.

As the episodes progress, we witness how Jean and Martin eventually come up with a plan to show Nelson that Victor is a cold-blooded criminal and how keeping Victor by his side would prove costly for him. The duo decides to put their heart and soul in stopping Victor as they are fed up with him putting people’s lives in danger. They make a careful plan to catch Victor red-handed without endangering anyone. And there’s yet another hurdle. They also need his sperm as a sample to prove his crime. Martin meets Victor in a restaurant. Victor is deceived into thinking that Martin is seeking his help to confess to Nelson while in reality, Martin wants to get Victor drunk and take him to a brothel so that he can get his semen. Jean and Martin eventually become successful in exposing Victor’s true, evil nature.

With a moody undertone, ‘Spotless’ is a dark comedy that earned huge approval ratings among both fans and critics, after its debut. Breaking genre barriers, it is a story that combines “elements of danger and drama with a sharp satirical edge.” Seamlessly written and exceptionally narrated, it is one of Esquire’s most ambitious scripted projects.

Spotless Season 2 Release Date: When will it premiere?

‘Spotless’ season 1 premiered originally in France on Canal+ on March 16, 2015. It was then picked up by Esquire Network to air it for its US audience. The series debuted here in November 2015. International distribution rights for the show was given to Netflix.

Now, as far as a second season is concerned, Esquire had announced way back in April 2016 that there would be a second edition of the show. Even the network’s vice president had confirmed its collaboration with Tandem productions for another installment. However, even after an official confirmation, there’s no news about ‘Spotless’ season 2 release date. So, what happened?

Esquire, which had originally made the announcement, was a 50/50 venture between NBC Universal and the Hearst Corporation, Esquire Magazine’s owner. Gradually, on account of several upcoming cable broadcasters and failure to garner viewer ships, Esquire began to struggle and eventually went out of business in 2017. And since ‘Spotless’ is completely an Esquire show, it is unlikely that it will return anytime soon. Moreover, most of its cast members have moved on to other projects. Its Twitter account has not seen any update since December 2016. Hence, considering everything, it is almost sure that the show has been canceled.

It is true that ‘Spotless’ did have immense potential and this is a sad bit of news for its fans. But who knows? The world of television has its own share of surprises! And if we do receive any news on ‘Spotless’ season 2 release date, we shall update this section immediately.

Below is the official trailer for season 1 of the show. Check it out to get an idea of what the series is all about. Additionally, if you have not watched it yet, you can head to Netflix to catch up on all its 10 episodes from the first season.