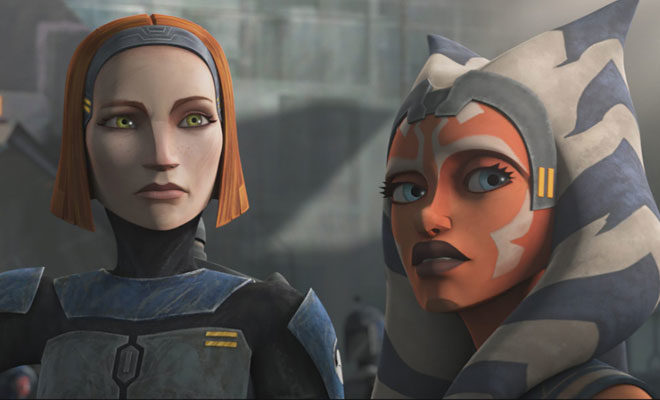 ‘Star Wars: The Clone Wars‘ has given us an incredible final season, and is headed towards the end. ‘Star Wars’ fans have loved how the universe is set with gripping narratives and fantastic animation. Breaking the season into three narrative arcs has allowed the show to bring different aspects of the vast universe together. While most franchise fans have known the significant curveballs in store, Season 7 has still surprised us with the smaller incidents that play out.

We have seen the adventures of the Bad Batch, the journey of Ahsoka, and finally, the siege of Mandalore. Currently, we are in the third arc, and the previous episode shows a high octane fight scene between Ahsoka and Darth Maul. However, it ends in the former Jedi’s victory, as she captures Maul. We know that Order 66 is invoked in the latest episode, turning Ahsoka’s world upside down, and signaling the possible end of the Jedi. Curious to find out what happens in the season 7 finale? We have the rundown and information on when and where to watch the finale.

Star Wars: The Clone Wars Season 7 Episode 12 Release Date: When Will It Premiere?

‘Star Wars: The Clone Wars’ Season 7 Episode 12 finale is slated to release on May 4, 2020, at 12 am PT, or 2 am CT or 3 am ET. The upcoming episode is titled “Victory and Death.” Since the events in the show happen within the world of ‘Revenge of the Sith,’ the premise of the finale is bound to the larger ‘Star Wars’ canon.

‘Star Wars: The Clone Wars’ is a Disney+ series, so the only way you can see it is on the streaming platform. You can get the pack for $6.99 a month or $69.99 a year. You can also bundle the Disney+ pack with Hulu and ESPN+ for $12.99 a month. Disney+ does offer a week-long trial period, but since the platform releases episodes weekly, a free trial period does not help users in binge-watching the show they want to see.

The episode starts with moments of peace before Order 66 is invoked. Bo-Katan learns of Maul’s capture and tells Ahsoka he wishes he was good at something other than war. The former Jedi says to the legendary Mandalorian that his people need a different kind of leader. She also reflects on how she’s always known war, despite protection being a Jedi’s primary job. She contacts the council about Maul’s capture, and Yoda thanks her for her service.

However, Ahsoka senses through the Force that Skywalker has turned to the Dark Side, Mace Windu is dead, and Palpatine is unmasked as the Sith Lord responsible for orchestrating the Clone Wars. As democracy dies and Darth Vader is born, Sidious orders the Storm Troopers to kill all Jedi, who are declared to be traitors against the Republic.

With Order 66 in effect, Rex and the Troopers turn on Ahsoka, who barely escapes with her life. However, she manages to learn from Rex that chips exist within the Troopers’ brains, which force them to comply with orders. Since she’s out of options, Ahsoka is forced to let Maul loose to create a distraction. As he tears through the Troopers using his Force, Ahsoka tracks down how to remove the chip.

Tano and her droid companions help Ahsoka remove the chip from Rex’s skull, as he picks up the blasters and shoots his men to save the ex-Jedi. Without his inhibitors, Rex is back to his old self and is shocked at having tried to kill Ahsoka. However, he informs her that the entire grand army of the Republic has been instructed to hunt down and kill all Jedi Knights. With the finale approaching, it appears that the Jedi will not survive the wrath of the mighty Palpatine.