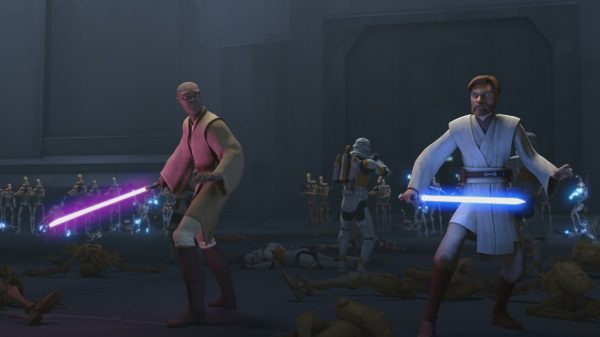 ‘Star Wars‘ has given us a vast universe to love and explore, and one of the best aspects of it is the animated ‘Star Wars: The Clone Wars‘ series. Currently, on Season 7, the show keeps moving from strength to strength, in terms of animation and narration.

The last episode sees the group trying to escape with Echo. They have to go up against Droids, which gives Anakin the chance to show some cool skills. With Tambor’s forces holding back, for now, you might be wondering what lies in store in the current episode. We have got you covered in that regard, as we also tell you when and where to watch the upcoming episode.

Star Wars: The Clone Wars Season 7 Episode 5 Release Date: When Will It Premiere?

‘Star Wars: The Clone Wars’ Season 7 Episode 5 is slated to be released on Friday, March 20, 2020, at 12 am PT or 2 am CT or 3 am ET. Titled “Gone with a Trace”, the episode sees Ahsoka befriending a pilot. However, she has to hide her Jedi past, even as she tries to stop a deadly droid.

‘Unfinished Business’ brings the first arc of Clone Wars to an end. Rex, Echo, and Anakin, along with the Bad Batch, prepare to get into the assembly complex on Arrakis. The plan is to get onto Admiral Trench’s dreadnought, and Echo is to plug into the Separatist computers and feed Trench strategies, which the Republican army will know beforehand.

While the troopers and Anakin carry out this hacking process, Obi-Wan and Mace Windu are on the ground, leading an attack. A hangar full of droids faces the wrath of the two warriors, in an enjoyable action sequence. Echo is conflicted about his identity after the years of torture.

Although the Bad Batch initially mistrusts him, they offer him a place among their ranks, and Echo bids Rex a touching farewell, via a salute. Elsewhere Anakin’s darkness begins to shine through as he faces Admiral Trench. When the admiral refuses to give up the codes, saying that Jedis have a reputation, and he isn’t afraid of what they might do to him, Anakin proves him wrong.

Slicing off three of his legs, Anakin lets a little bit of Darth Vader shine through. It is clear that he is not like the other Jedis, and is willing to resort to torture. When Trench tries to electrocute him, Anakin puts the lightsaber through his chest. The episode ends in an eventful manner, with Anakin’s dichotomy making it all the more enjoyable.

Read More: Will There Be A Solo: A Star Wars Story Sequel?