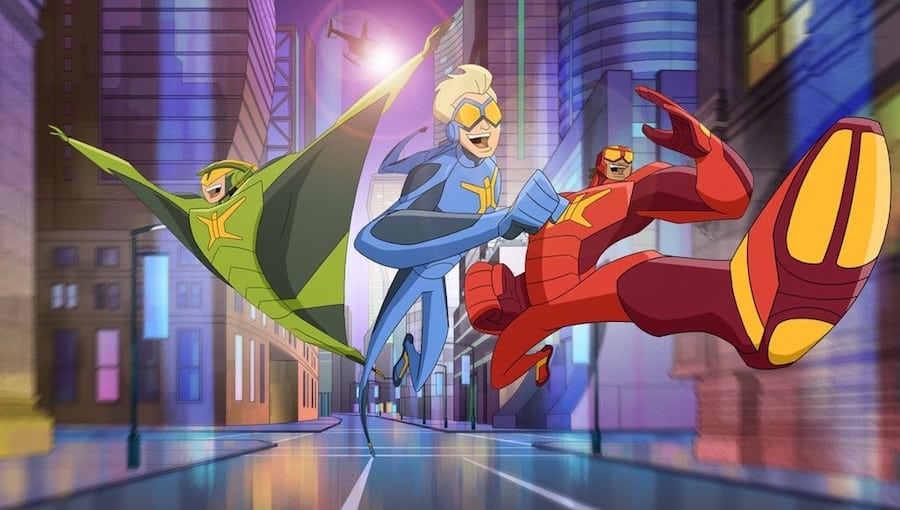 When Adult Swim recently picked up the decade-old web series Apollo Gauntlet, we were reminded of its low-budget production as a series of YouTube clips, and how it only served to add to the charm. The Superhero genre has come far forward from the early glory-days of the Lee Falks and the Stan Lees – it encapsulates a much broader spectrum now. One axis of this vastness is budget, and it takes an Apollo Gauntlet or some other indie passion-project to prove that you need not be the top of the food chain of the now multi-million dollar industry.

Not every superhero production need be MCU/Disney-plus multiverses. Which brings us to the other axis: branding. The idea of superheroes itself today is a much more upbeat offshoot from a doom-and-gloom vigilante. Case in point: the unnamed hero on the wrappers of Boomer, a superhero reduced to a mascot of a chewing gum product.

‘Stretch Armstrong’ is exactly the same kind of example, although the other way around. Originally a stretchable gelly action-figure introduced in the mid-’70s, it was almost a cultural relic of the past excavated by Hasbro when they started restocking this design back in 2016. Waters run deep for various media tie-ins with the Stretch Armstrong license – including a 1994 Disney film and another 2008 film (though the latter was cancelled mid-production). On television though, the recent Netflix adaptation is all that Stretch Armstrong has got going for it.

Stretch Armstrong and the Flex Fighters Cast: Who is in it?

By virtue of having the label of Netflix, the show had a reasonably high budget. As an above-average show at best, it did not have to put much stress on its voice acting, being carried on the sheer Hasbro franchise value as it were. But anyhow, the show does have a Netflix-worthy class to boast of, with names well-known and familiar in the current animated (or even non-animated) TV sphere. The biggest face-value (in the literal sense) could be drawn from Wingspan in Netflix’s show, as it is played by Steven Yeun, popular as the face of Glenn in AMC’s The Walking Dead.

The rest of the cast, including the lead role, are mostly people famous in the VA industry. Thankfully, Netflix’s rendition of Stretch Armstrong is more ‘Stretch Armstrong and friends’, and all of the side-characters get equal screentime as the forerunning protagonist (if not more), allowing for the strong VA cast to really shine.

Most of the cast are expected to return for season 3.

Stretch Armstrong and the Flex Fighters Plot: What is it about?

Hasbro Studio’s home-brewed Stretch Armstrong, above all, presents a great opportunity for the producers to capitalize upon: as a franchised face which had no need to have a consistent backstory in the past, Stretch Armstrong is the perfect blank slate every license-owner would like their IP to be. With Netflix’s shadow to lead it on, the new Stretch Armstrong utilizes this by completely reinventing the character, the universe, and its lore from scratch. As we have stated before, Stretch Armstrong and the Flex Fighters is all about the ‘flex fighters’ bit, with new sidekick characters aplenty.

In Hasbro’s new version of the origin story, the show’s ‘Charter City’ gets its own elite squad of supercops known as ‘Flex Fighters’ (a name that is ridiculous and arbitrary, but completely serviceable) when a millionaire philanthropist, Jonathan Rook, enlists Jake Armstrong (Stretch), Nathan Park (Wingspan), and Ricardo Perez (Omni-mass), who all recently obtained their superpowers from a freak accident involving the mystery substance, ‘Flexarium’.

Stretch Armstrong and the Flex Fighters Season 3: Release Date: When will it premiere?

Stretch Armstrong and the Flex Fighters season 2 premiered on September 7, 2018. Originally ordered as a two-season Netflix gig, Stretch Armstrong had drawn only middling critical consensus since its premiere on November 17, 2017. However, the show has done alright commercially, and now it has a partnership with IDW Publishing involving a comic-book tie-in – so it seems that Stretch Armstrong is here to stay.

There does not seem to be much buzz, but we would yet expect Stretch Armstrong and the Flex Fighters season 3 to be out at least by Q4 2020. That is still speculation based on what seems the logical next step for Hasbro, though, and neither Hasbro nor Netflix has officially announced anything about a renewal for the show, which leaves a release date for season 3 TBD.

It is unclear whether a third season will be produced anytime soon and while you wait for news on the matter, there are still two whole seasons in case you have not caught up with the Netflix show yet. We highly recommend it in case you have a fondness for the character, or liked the 1994 film. A great starting point, in that case, would be the trailer for the debut season, which you can find here. Start streaming the show on Netflix thereafter.