Will There be a Super Dinosaur Season 2? 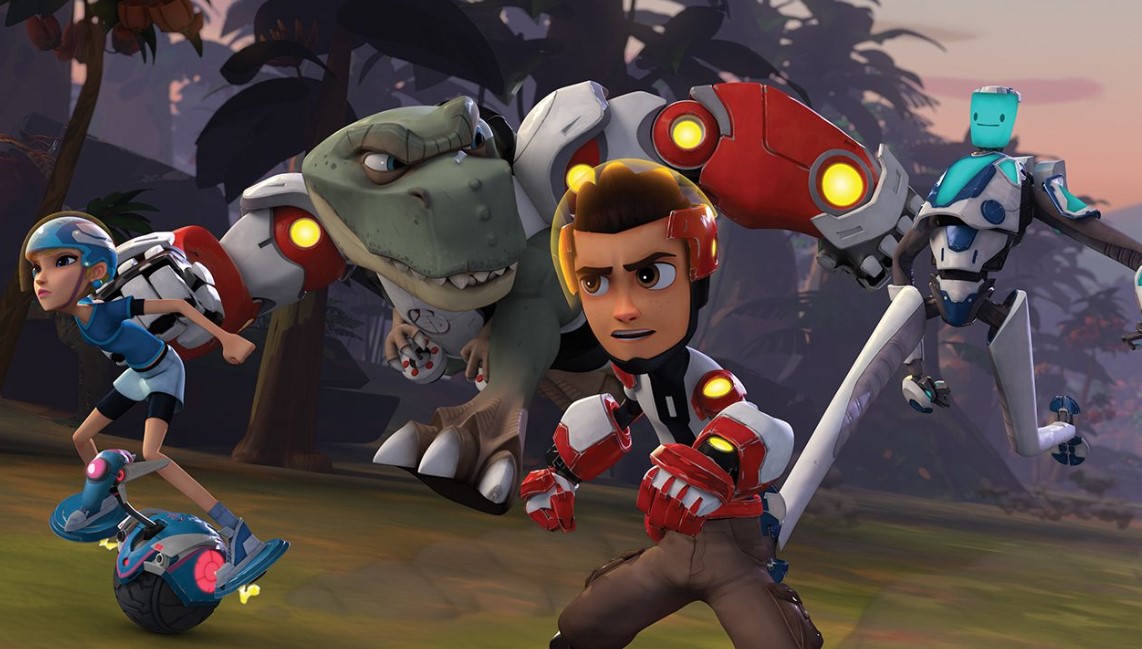 ‘Super Dinosaur’ is an animated tv series which is based on the comic books with the same name, written by Robert Kirkman (‘The Walking Dead‘) and Jason Howard. Produced by Spin Master Entertainment, Atomic Cartoons and Skybound Entertainment, the show originally premiered in Canada on Teletoon in September 2018. The show airs on Amazon Prime Video for for the US audience.

The first season of the show was well-received. Here’s everything we know about Super Dinosaur season 2.

Super Dinosaur Cast: Who is in it?

Valin Shinyei is the voice-over artist for Derek Dynamo, the super-talented, vibrant, and intelligent 10-year-old son of Dr. Dexter Dynamo. Derek, along with his dad and partner Super Dinosaur, works at Earthcore. He rides a self-built robotic vehicle called Wheels and protects the earth from multiple attacks.

The titular character Super Dinosaur (Mac Heywood) is a genetically enhanced Tyrannosaurus Rex, designed by Max Maximus. He is almost a family member of the Dynamo clan, residing with them in the Dynamo Dome. A vegetarian T-Rex, SD has a knack for playing video games and is a huge fan of skateboarding. He also has an adopted penguin as a pet.

Dr. Dexter Dynamo (Alessandro Juliani), Derek’s brilliant dad is the mastermind behind all the advanced equipment used by Derek and SD on their missions. However, Dexter is poisoned by Max Maximus with a mind-decaying virus after which he loses his cognitive functionalities. The Kingstons, a certain crew of expert mechanics, residing with the Dynamos, help in repairing the gear donned by Derek and Super Dinosaur.

Bruce Kingston (Brian Dobson) is Sarah’s better half and dad to Erin and Erica. Erin Kingston (Shannon Chan-Kent), a member of the Kingstons, is a lively, curious, and charming young girl, who soon bonds with Derek. She is also recruited in Earthcore’s cadet program. Erica Kingston (also voiced by Shannon Chan-Kent), Erin’s sister, is not quite pleased when the Kingstons move from New York to live in Dynamo Dome. She has a pet spider called Sherman and holds deep interest in the arts.

Max Maximus (Marco Soriano) is one of the primary villains, an evil scientist and the inventor of Dynore. He lives in Castle Maximus and creates a team of genetically enhanced Dino-Men. He seeks to destroy Dynamos Dome and rule the planet after their collapse. Minimus (Sean Thomas) is Max’s artificially cloned son, who has a conflicted relationship with his dad.

The Dino-Men are a group of genetically modified creatures which are half humans and half dinosaurs. The main members in this crew include Tricerachops (Kathleen Barr), Dreadasaurus (Chris Nielsen), Terroropterx (Bart Batchelor), Doometrodon (Brian Drummond), Squidious (Brian Drummond), and KAL (Vincent Tong). As opposed to the rest of the Dino-Men, these characters are highly intelligent and have separate motives of their own.

Super Dinosaur Plot: What is it about?

‘Super Dinosaur’ is a CGI-animated, action-adventure series, based on the eponymous comic book series by Robert Kirkman and Jason Howard. It is targeted toward kids, aged between six to 11 years and chronicles the multiple adventures of Derek Dynamo and his best friend, the genetically modified T-Rex, Super Dinosaur. The duo teams up on a mission to save their planet from a group of evil Dino-Men and their master, Max Maximus.

The story begins by introducing us to Doctor Dynamo and Max Maximus, who stumble upon a hole, dug deep within the earth’s surface which leads to its inner core. Surprisingly, the hole is an abode for dinosaurs. This mysterious location, called Inner Earth, also contains the Dynore, a mass of solar power that is capable of generating intense energy. As the pair starts with their experiments, Maximus, by mistake, genetically alters a T-Rex. Max then tries to use it to gain control over the planet. However, Doctor Dynamo and his son, Derek, foil his attempts and join hands with Super Dinosaur to protect the earth from various threats.

According to Kirkman, “In the falling out between Max Maximus and the Dynamos, Doctor Dynamo was injured to the point where he can’t really think as much as he could before. His brain isn’t really working right but he doesn’t know it, so Derek has to go behind him and finish his equations for him, correcting his work and doing whatever he can to make sure that his father doesn’t realize that he has this ailment now. It’s also so the government overseers don’t see that their operation is being run by a 10-year-old kid, so it’s to make his dad look good and make sure that he can keep working.”

Super Dinosaur Season 2 Release Date: When will it premiere?

‘Super Dinosaur’ season 1 premiered in Canada on Teletoon on September 8, 2018. For the US audience, the show released on Amazon Prime Video on October 6, 2019.

As far as the next season goes, we don’t have an official announcement yet. Though considering the success of the show, we would be surprised if it doesn’t get another season. If renewed,’Super Dinosaur’ season 2 can release sometime in September 2020. We will update this section as soon as we hear more.

You can check out the official trailer for ‘Super Dinosaur’ season 1 below: