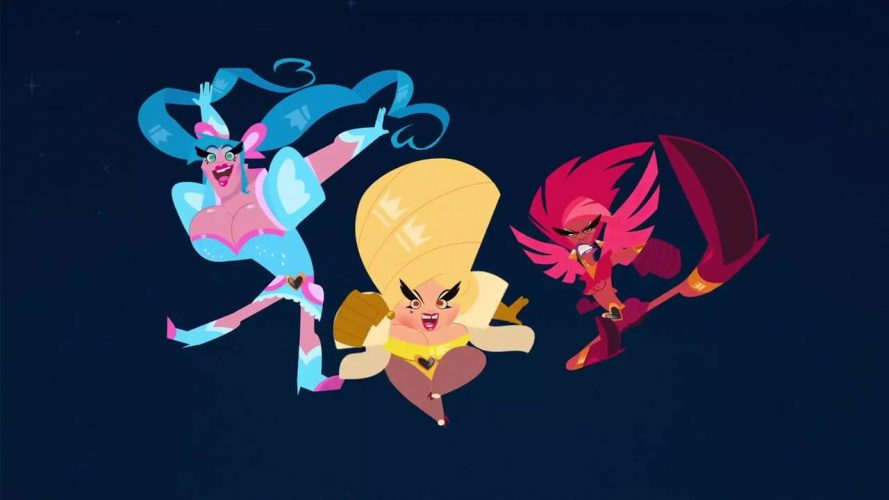 Super Drags is a Brazilian animated adult comedy web television series whose five episodes made it to the screen on November 9, 2018, on Netflix. The series centers around the adventures of three gay co-workers named Patrick, Donizete, and Ralph who work at a department store. They lead dual lives, one of which is as superhero drag queens who go by the names, Lemon Chifon, Scarlet Carmesim, and Safira Cyan. It is peace they seek in their gay community and aim to protect everyone from a conservative politico Sandoval and an evil queen named Lady Elza. Their lives get jumbled up as fighting crime takes a toll on their regular activities.

Super Drags Cast: Who is in it?

Super Drags Plot: What is it about?

Super Drag centers around an evil queen named Lady Elza whose main motive is to steal all the “highlight” energy to restore her beauty back. She attempts to steal the energy at the Goldiva show from the LGBTQ community. Three fierce gay co-workers serve as the superheroes of the LGBTQ community. They come to the rescue of the people and save them from their evil nemesis. Lady Elza has spreads havoc everywhere and initially has out superheroes giving in to her tactics.

Patrick decides to change his look when he realizes that Lady Elza’s new robot monster only targets victims based on their looks. He suffers a disqualification and then decides to fight back against the evil queen. Patrick meets Donizete, and both of them go on a mission in an undercover operation. Ralph goes to attend Sandoval’s “gay cure” boot camp after being rejected by his father on revealing his true identity. One after the other, more tragedies befall, and the Super Drags try their best to fight back. They determinedly go after saving Goldiva when she gets kidnapped before her concert. Scarlet finds out more about Goldiva’s past. In the finale episode, the evil queen Lady Elza drains all the energy of the audience at Goldiva’s concert. This puts the Super Drags in serious danger. To find out if they succeed in their mission or if Lady Elza becomes successful in her wicked plans, one must watch the series.

Super Drags Season 2 Release Date: When will it premiere?

Super Drags season 1 premiered on November 9, 2018. As far as the next season goes, we don’t have an official announcement yet. The first season received mixed reviews from its audience but it wouldn’t be wrong to say that the series has gathered a decent fan base, especially in the LGBTQ community. There have been unconfirmed reports that Netflix won’t renew the next season. We would like to wait till we get an official confirmation. In the unlikely scenario of the show getting renewed, our best guess is that Super Drags season 2 release date could be sometime in 2020 or 2021. We will update this section as soon as we learn more.

While we wait for any positive news on Super Drags season 2, check out the season 1 trailer to refresh your memories. If you haven’t seen the show yet, head over to Netflix to catch all the episodes of the previous season.