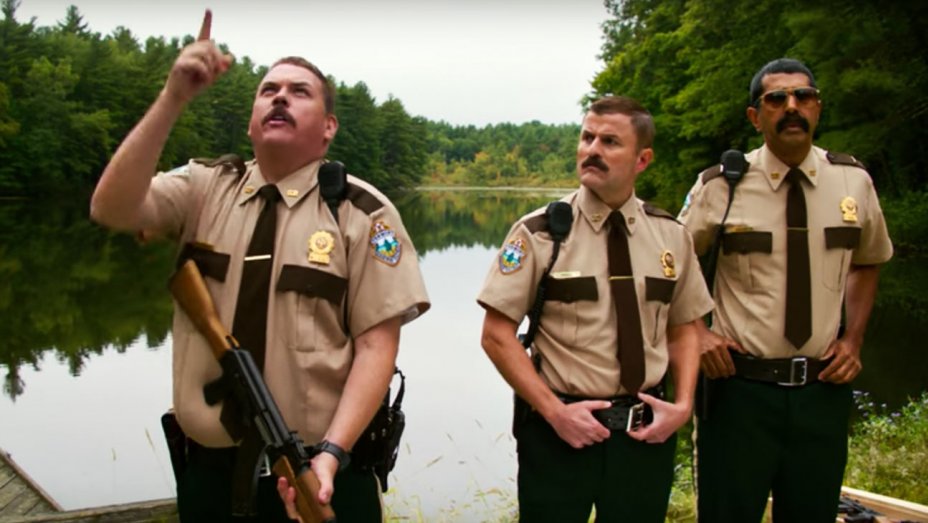 Comedies are some of the most enjoyable movie-going experiences since they help us escape reality and have us laughing in no time. Workplace comedies are often even better since adults can easily relate to workplace dynamics and the situations that can lead to comedic relief. ‘Super Troopers’ is one such movie that has been getting its comedy just right. The first film came out in 2001 and went on to become a commercial and critical success. More importantly, the film also attained a sort of cult status.

However, the second film took a long time to come out. Thus, ‘Super Troopers 2’, the 2018 movie, had a hard time attracting financial backing. That did not deter the people behind the project since they started a successful crowdfunding process and made the movie with a budget of $13.5 million. In return, ‘Super Troopers 2’ went on to make $31.6 million. The plot follows the favorite Super Troopers yet again as they are called to set up a new Highway Patrol station at the time of an international dispute arising between Canada and the United States of America.

Considering that the second movie was also a success, the Broken Lizard comedy group, who are the brains behind the ‘Super Trooper’ movies, have decided not to wait around too long before coming out with the third installment to the franchise. Yes, fans can rejoice since ‘Super Troopers 3’ is being made. Here is everything that we know about the upcoming movie.

Super Troopers 3 Plot: What Can It Be About?

When it comes to news about ‘Super Troopers 3’, we already know that the title of the upcoming movie will be ‘Super Troopers 3: Winter Soldiers’. As the name suggests, the setting will be in winter, which is bound to make for a very different set of visuals than one we are accustomed to. The title of the upcoming movie is obviously a play on ‘Captain America: The Winter Soldier‘. While there will be no superhero shenanigans going on, we can expect our favorite troopers to be back in action again, as they try to save the day when they are not too busy pranking each other in the workspace.

Undoubtedly, ‘Super Troopers 3: Winter Soldiers’ will not be messing with the successful formula they have been using in the past two movies. Thus, we are bound to see a plot that heads towards an inevitable resolution, painting the troopers as heroes. However, before we reach this conclusion there are bound to be many laughs and gags along the way.

The filmmakers have always kept the tone light and there is no reason to expect anything different from the upcoming film which will mark the third installment of the franchise. Notably, the story will definitely see the Troopers trying to subdue some new antagonist who gets to become a nuisance during winter. Despite enjoying an easy workday, the troopers are not afraid to lay down the law when it matters most.

Super Troopers 3 Cast: Who Can Be In It?

The cast of ‘Super Troopers’ has remained the same over the past two movies, leading us to believe that they will return for a third film as well. Therefore, we will have Jay Chandrasekhar appearing as Trooper Arcot “Thorny” Ramathorn, the second in command in the barracks, Paul Soter as Trooper Carl Foster, the calmest and most reserved of them all, Steve Lemme as Trooper MacIntyre “Mac” Womack, the prank-loving trooper, Erik Stolhanske as Trooper Robbie “Rabbit” Roto, the rookie, Kevin Heffernan as Trooper Rodney “Rod” Farva, the ill-tempered radio operator, and Brian Cox as Captain John O’Hagen, the commander of the barracks.

Apart from that, we are bound to have some new characters in the film, to help drive the funny plot forward and make the Troopers work for their money. New cast members will be added to play these roles but nothing has been announced yet.

Super Troopers 3 Crew: Who Can Be Behind It?

Both ‘Super Troopers’ and ‘Super Troopers 2’ have been directed by Jay Chandrasekhar, produced by Richard Perello and written by the entire group, Broken Lizard. Since this team has worked so well together, managing to create two movies loved by audiences and critics alike, they will be putting their resources and talents together for the third movie as well.

Super Troopers 3 Release Date: When Can It Premiere?

‘Super Troopers 2’ premiered in 2018, which is over a decade after the first film. The people behind the project have already realized that the more the delay, the harder it is to secure financing. Thus, they will not be making the same mistake again. A script is already being prepared, and since these movies do not take too long to shoot, we are expecting ‘Super Troopers 3’ to most likely release 2021.