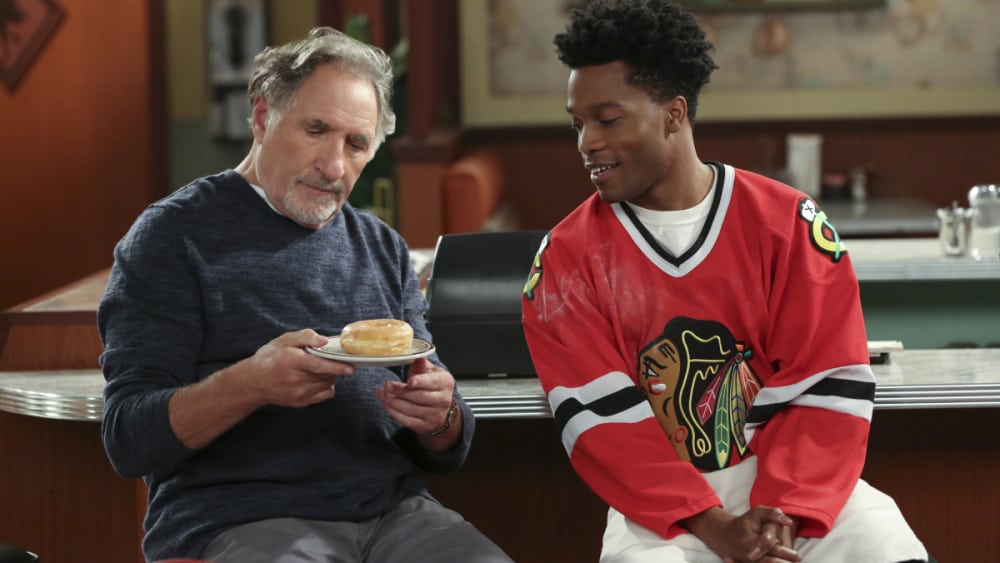 ‘Superior Donuts’ is an American sitcom comedy series which is based on a play of the same name, by Tracy Letts. The show has been developed for television by Neil Goldman, Garrett Donovan, and Bob Daily. The show revolves around an old-school doughnut shop owner Arthur, his employee, Franco, and their friends and supporters who keep the shop going in a changing and culturally mixed, Chicago neighborhood.

‘Superior Donuts’ first premiered on February 2, 2017, and airs on CBS. Naturally, the show seeks to serve as a commentary on society of that time as a lot of sitcoms attempt to do, but the critics have not taken too well to the humor the show resorts to, saying, “While Superior Donuts’ talented cast impressively delivers, the annoying laugh track and stale jokes leave a hole in the middle of a crusty — albeit topical — narrative.”

Superior Donuts Cast: Who is in it?

The cast of ‘Superior Donuts’ is led by Judd Hirsch as Arthur Przybyszewski, who is 75 years old and the owner of the doughnut shop. He is an old-fashioned man and a widower.

Jermaine Fowler appears as Franco Wicks, the 28-year-old energetic young man who is also an aspiring artist. He is Arthur’s assistant and is naive, but has his heart in the right place, wanting to help the man from whom he and his father regularly bought donuts as kids.

Katey Sagal appears as Officer Randy DeLuca, the daughter of Arthur’s best friend, while David Koechner is seen as Carl ‘Tush’ Tushinski, one of Arthur’s loyal customers and someone who uses the shop as a makeshift office.

Maz Jobrani appears as Fawz Hamadani Farooq Al-Shahrani, who is a real estate developer and the owner of a dry-cleaning shop next to Superior Donuts. His aim is to acquire and tear down Arthur’s place despite the fact that he gets his coffee there. There is Rell Battle as Sweatpants, Franco’s roommate. He sometimes helps Arthur drum up the business.

If there is an upcoming season, it is likely that we will see the main characters return, while there might be some new faces that are added into the mix, and they will surely make things more interesting.

Superior Donuts Plot: What is it about?

‘Superior Donuts’ is based on the relationship between the doughnut shop owner and his employee. The story starts with the shop owner Arthur Przybyszewski who hires a new employee named Franco Wicks. When Franco was younger, his father and he regularly visited Superior doughnuts to buy a box of doughnuts. The doughnut shop was struggling financially and now Franco helps in trying to improve and modernize the shop. However, Arthur is reluctant and Franco’s attempts, at times, irritates him. In the same season, Randy (Katey Sagal) who is a loyal supporter of Franco, and her curious partners, James (Darien Sills-Evans) and Tush (David Koechner), use the shop as their office.

On the other hand, Maya (Anna Baryshnikov), who is a scholar and pursuing her Ph.D. from a top grade school and Sweatpants (Rell Battle), Franco’s childhood friend who is interested in dressing up like a doughnut, try to help Franco to get more business. Fawz (Maz Jobrani), who is a caffeinated neighbor of Arthur’s, has now become a real estate agent. He persuades Arthur to sell his building to him. Sofia (Diane Guerrero), who is introduced in the second season is a food truck owner, soon becomes friends with Franco. The entire story is simple yet impressive.

This series has all the elements which make it a completely entertaining watch. However, why Franco spends so much time and effort trying to help Arthur, who is mostly grumbling and is financially solvent, is something that is not described in detail. Anyhow, not only is Franco tasked with helping Arthur increase business, but also tries to protect the shop from crime. This gives the show a good entry into addressing the problems of Chicago, and how the quickly gentrifying neighborhood still attracts some unsavory elements. While this clash of worldviews, incomes, and cultures could prove to be the basis of a very fascinating show, the portrayal of Arthur against the world, where he refuses help, blunts a lot of the narrative and the humor. Hidden somewhere deep in this series, is a message about change and its effects, but it neither reaches the audience nor the characters of the show.

Variety has aptly summarized the condition of the show, saying, “A bigger problem for ‘Superior Donuts’ is that its humor feels as tired as Arthur appears to be. The comedy is based on a play by the talented writer and actor Tracy Letts, but at times, the watered-down “Donuts” feels as though it was dredged up from a comedy vault that closed decades ago. Arthur refers to Franco’s favorite music as “hippity-hoppity,” and everyone who is not in Arthur’s age bracket is sardonically referred to as a “hipster” or a “pretentious millennial.”

Superior Donuts Season 3 Release Date: When will it premiere?

‘Superior Donuts’ Season 2 premiered on October 30, 2017. On May 12, 2018, CBS canceled the show after its two-season run. This is not surprising since it was one of the lowest-rated shows on the network, especially at a time that they were trying to make changes to keep up with the competition from other networks. Though, fans should not lose all their hopes. There’s still a possibility that some other network picks up the show. If that happens, we will update you about ‘Superior Donuts’ Season 3 release date.

You can check out the trailer of ‘Superior Donuts’ season 2 below. If you have not seen the series, then be sure to check it out to witness a changing Chicago amidst humor and social commentary.