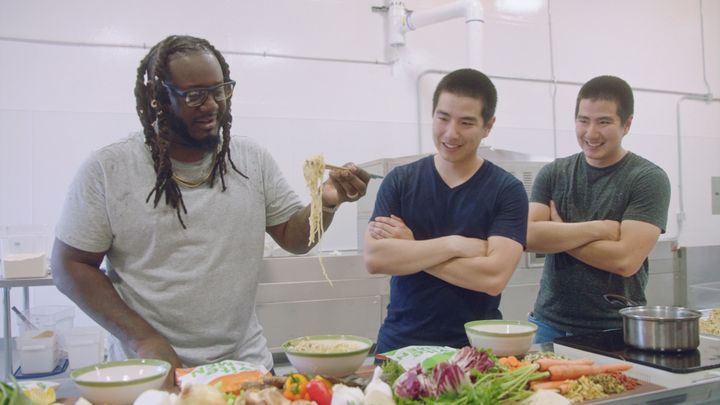 ‘T–Pain’s School of Business‘ is a reality series that airs on Fuse. The entrepreneurial show involves some of the most creative and unique startups, launched by innovative millennials. These brilliant minds are all set to define the future and T-Pain lends us an inside view of how these businesses started in the first place and how the owners converted their dreams into reality. Across the episodes, he asks details about each successful venture, giving viewers those much-needed answers.

T-Pain’s School of Business Cast: Who’s in it?

Faheem Rasheed Najm, mainly recognized by his stage name T-Pain, hosts and headlines ‘T–Pain’s School of Business‘. The rapper, singer, songwriter, and record producer debuted with his first album, ‘Rappa Ternt Sanga’, in 2005. Since then, he has released multiple numbers which have been US Billboard chart-toppers. The hip-hop artist is a two-time Grammy winner and is the founder of the record label imprint, Nappy Boy Entertainment.

T-Pain is expected to return as host for season 3, if and when it happens.

T-Pain’s School of Business Plot: What is it about?

‘T-Pain’s School of Business’ follows T-Pain as he visits several startups to try out their offerings first-hand. On his trips, he also asks the founders questions about their journey, the genesis of their ideas, and the final implementation and execution process. Some of the companies featured on the show include Vite Ramen (a brand that manufactures healthy instant ramen noodles), Rebel Coast Wine (winemaker with doses of marijuana), and Artiphon (an advanced type of technology which can be used to play any instrument via a few switches). He also checks out startups that have introduced a certain version of e-sports, a cure for hangovers, and a cat café, among others.

As per T-Pain, “I’ve done everything I want to do in my life. I think it’s time to bring other people to the forefront, and really use my platform to help these people out.” Additionally, although the premise of the series seems to be pretty much similar to that of ‘Shark Tank‘, it has a slight difference. Here, the host predicts a venture’s sustainability by examining the end goals of the founders — which should involve much more than just making a bunch of cash.

T-Pain has himself been quite an innovator during his musical journey. For instance, he was the one who popularized the use of Auto-Tune and partnered with comedy rap icons, ‘The Lonely Island’. Moreover, he holds a history of supporting upcoming ventures via crowdfunding platforms such as Kickstarter and IndieGoGo. Now, he plans to apply this experience to small businesses, that deal in strange, wild offerings. T-Pain vows to continue his work further with aspiring entrepreneurs and pass on his knowledge to upcoming generations — both on and offscreen.

Season 2 of ‘T-Pain’s School of Business’ also follows the same concept. We see the talented rapper as he visits more sites, which involve him eating a robot-made hamburger, checking out a zero carbon emissions semi-truck, and getting a tattoo etched on his skin via wearable UV sensors.

‘T-Pain’s School of Business’ is a show that aims to be organic, natural, inspirational, educational and informative. As per T-Pain, “I wanted information behind the development, the information behind the process, what made you come up with this idea.” He further added that his sole intention is to motivate younger and up-and-coming entrepreneurs. Therefore, it is beneficial when the show is accompanied by the required information. There is no point when something is super fun and there is zero learning.

Season 3 of the show could see T-Pain visit several new start ups in his quest to discover inspiring stories of starting something from scratch.

T-Pain’s School of Business Season 3 Release Date: When will it premiere?

Since its release, ‘T-Pain’s School of Business’ has received quite a bit of positive approval ratings from viewers. However, there’s still a long way to go — for it to reach the same heights as that of the similarly-themed ‘Shark Tank’. But, with its novel approach, it is expected to give its featured companies a chance to keep on showcasing their unique products.

As far as the next season goes, we don’t have an official announcement yet. Though considering the rising popularity of the show we expect the show to be back next year. If renewed, our best guess is that ‘T-Pain’s School of Business’ season 3 can release sometime in August, 2020. We will update this section as soon as we hear more.

Here is the official trailer for season 2 of ‘T-Pain’s School of Business’. If have not watched the show yet, head over to Fuse to catch up on all the previous episodes from the show.