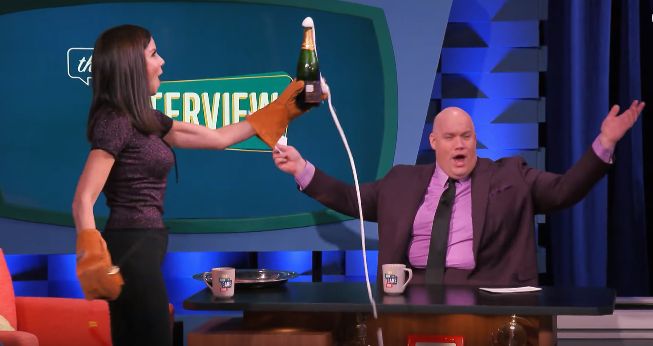 ‘Talk Show the Game Show’ is a hilarious mash-up of the well-known TV show formats – talk shows and game shows. It is a bit of both, to be honest. The show is brought to reality by the American actor, comedian and writer Guy Branum. He is famous as the head writer of ‘X-Play’, a TV show about video games, and as a regular panelist on ‘Chelsea Lately’, a late-night comedy talk show. Being one of the most talented and well-versed people in the industry, Branum is perhaps the only person who could come up with such an idea of making a game out of a talk show.

The first season of the TV show released on April 5, 2017, in the United States. Season 2 of the show aired on February 1, 2018. It airs on the truTV network and is filmed in Los Angeles. The series successfully found its way to a second season, but what’s next? Will there be a ‘Talk Show the Game Show’ Season 3? We will answer that, but first, let’s quickly look into the details of the series.

‘Talk Show the Game Show’ is hosted by the series’ mastermind Guy Branum. Branum is a well-known American actor, comedian, and writer, known mostly to be a part of ‘The Mindy Project‘ and ‘Chelsea Lately’. Emmy Award-winning writer, actor, comedian, Karen Kilgariff, best known for co-scripting ‘The Rosie Show’, ‘The Ellen Degeneres Show’ and ‘The Pete Holmes Show’, and author and journalist, Casey Schreiner, best known for writing ‘Attack of the Show’ and ‘TakePart Live’, while also hosting ‘The MMO Report’, act as the judges for the show. They are seen roasting the contestants as well as awarding and deducting points from them.

Besides this recurring cast, each episode consists of several celebrity contestants. Among them are actor-comedians, James Adomian, Scott Adsit, Maria Bamford, Nicole Byer, and Adam Cayton-Holland.

What is Talk Show the Game Show About?

‘Talk Show the Game Show’ is a live comic TV show, which airs on truTV. It is a brilliant mixture of elements of a game show as well as a talk show. The result is a hysterically entertaining TV show featuring several celebrity guests. The guests receive points and endure punishments, based on their behavior throughout the show.

Branum interviews the guests while they are judged by a comedic panel over a predetermined set of rules. For example, points are awarded for using anecdotes, joking, callbacks to another guest’s joke, drinking alcohol onstage and even for being interviewed, stoned. However, it’s not all roses without thorns – the judges and the host can also deduct points and issue sanctions based on the guests’ violation of the rules, being boring, underdressed or overdressed, and as mentioned in the official rules of the game, for committing murder.

The show is a hilarious attempt at a talk show combined with a game. However, it does what it was meant to do – provide the utmost entertainment. What is more comical than anything else, is how all the talents take it so seriously. The judges and host demand excellence from the guests, while the guests come here to win the title of Best Guest of the Night.

The combination of comedy and strict rules makes it quite extraordinary. Every episode consists of some key parts including the judges’ critiques, the lightning round, three interview segments, and a monologue. Branum’s dry wit takes the show on another level where it translates beautifully into the talk show format. There is a seven-page document specifying the official rules of ‘Talk Show the Game Show’, which includes the procedure and structure of the game show. It also includes every possible element of judging criteria.

‘Talk Show the Game Show’ Season 2 premiered on February 1, 2018, on truTV. The first season consisted of sixteen 30-minutes episodes, each with its own special name. The second season continued with the same number episodes.

However entertaining the show may have been, it never really received proper recognition, maybe due to the comparatively lesser popularity of truTV among the heap of other massively popular networks. With just 4.3/10 stars on IMDb based on less than 260 votes, the series still managed to stay in the business for 2 seasons.

On November 1, 2018, Guy Branum tweeted that the show had been cancelled by truTV. The Tweet read, “I’m very sad to say Talk Show The Game Show has been canceled by @truTV. I’d like to thank them and everyone involved in the show, especially @dropdeadsuit @KarenKilgariff @iamwandasykes and Page Hurwitz for making it possible. It was so much fun.”

Henceforth, there has been no official announcement about the same, which leads us to believe that this is truly the end and ‘Talk Show the Game Show’ Season 3 stands canceled.

Here is a sneak peek into the show. Let us know if it warranted another season in the series. You can stream the show on Amazon Prime Video.