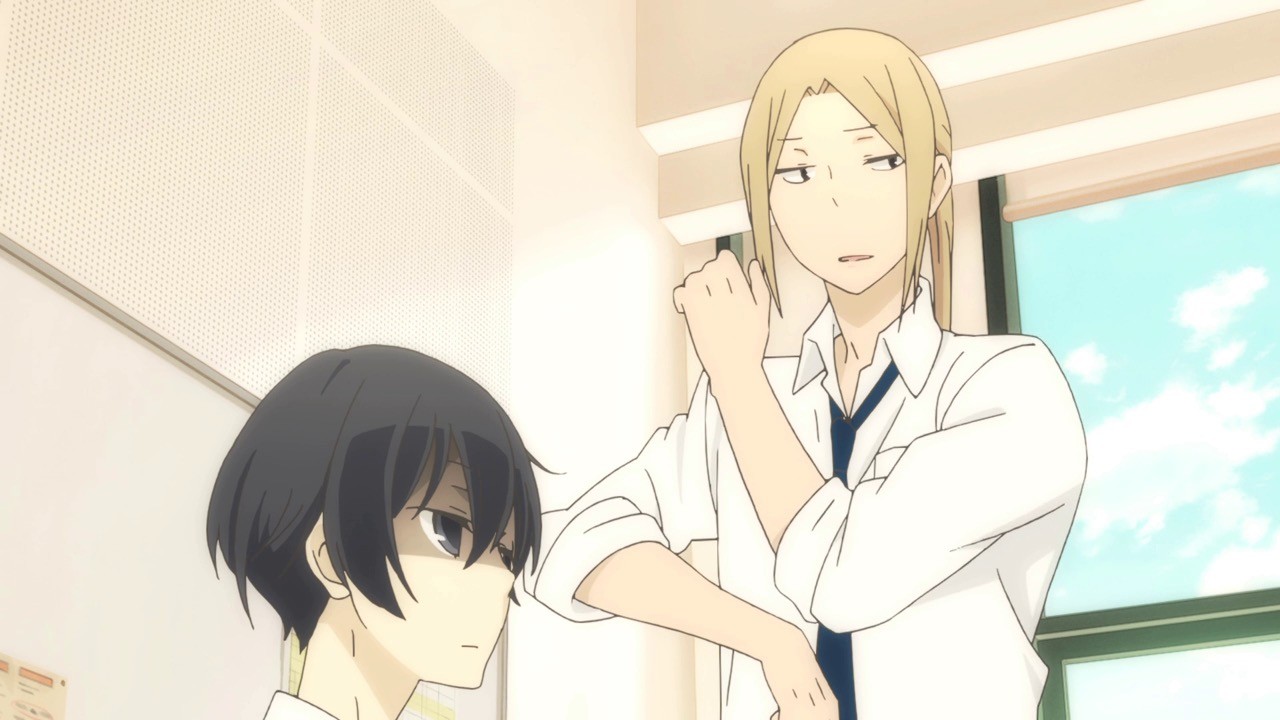 ‘Tanaka-kun wa Itsumo Kedaruge’ follows a very simple premise and it’s not the kind of anime that you would expect yourself to enjoy. But what starts off as a show about a listless individual soon turns into an entertaining representation of how others react to his slothful gimmicks. While the show does borrow some typical high school clichès and tropes, its listlessness twist makes it stand out from other similar anime. The laid-back attitude of the main character might make the anime feel a little dull in the beginning, but with time, it’s his character that breathes new life into the entire series.

Even the animation style that has been adopted by Sliver Link is just perfect for the slice-of-life themes of the anime. All of its perfectly-timed jokes and comic situational moments make it one of the best slapstick comedies anime shows out there. And if you haven’t seen it yet, you’re certainly missing out. If you have watched it, you’re probably wondering is it will ever return with a sequel season. Well, move on to the next section to know more about the possibilities of its renewal.

Tanaka-kun is Always Listless Season 2 Release Date: When will it premiere?

‘Tanaka-kun is Always Listless’ season 1 premiered on April 9, 2016, and with a total of 12 episodes, it ended on June 25, 2016. Since its release, ‘Tanaka-kun is Always Listless’ has gained a lot of popularity and even its average rating on most anime platforms is pretty good. Even so, the Studio that created it has not yet green-flagged its sequel.

However, since the anime first premiered just 3 years ago, it still stands a good chance of getting renewed. Also, the manga it has been adapted from has a lot of content that has not been covered in its first season. So a lack of source material should certainly not be a problem for its creators.

Moreover, in the past, Silver Link Studio has not shied away from renewing its popular anime shows, so it might just consider this one for a sequel as well. My best guess is that Tanaka-kun is Always Listless season 2 might release sometime in 2021 or later. As of now, there has been no word about it from the Studio’s end, but if there were to be one, we can expect it to premiere in 2021 or later. As soon as we get any news regarding this, we will certainly update it here on our website. Till then, you can check out our list of other similar Slice-of-Life anime.

For high school kid Tanaka, life is far less happening than any of his peers. His short attention span and his ability to sleep off anywhere make all of his days as uneventful as all the others and he just sulks his way through school. To seek his lethargic lifestyle, he tries to avoid all kinds of situations where he is expected to put in any effort. With his only friend Oota, who helps him complete tasks that he is not able to perform, Tanaka tries his best to get some peace in the chaotic world around him.

Oota, also spelled as Ohta, is the deuteragonist of the series who is Tanaka’s best friend. He is quite tall for his age and has long light brown hair that he always keeps neatly tied up at the back of his head. In appearance, he looks really mature and also has a pretty good build. He is easily able to carry Tanaka on his shoulder when necessary. He can also seem a little menacing on the outside but his innocence contradicts it. Oota never leaves Tanaka alone and even helps him out with the most basic tasks. He’s really kind to him and acts as his caretaker at school.

There are times when Tanaka even states that he would really be a good wife to him. He often jumps to conclusions and tries to be optimistic about life. He also tries to encourage people when they feel low. He has an obsession with sweets and hates it when someone tries to waste them. Despite his brash outlook, he is extremely scared of ghosts. After his father’s death, he tries not to spend more than 3000 yen per month and supports his mom in all the ways he can.

Tanaka is the titular character of the series who, in appearance, is the opposite of Oota. He is short and has a fragile frame.  He has short dark hair and droopy eyes. He is quite good-looking but the sullen look on his face often gives off the wrong impression to most people around him. For the most part of the series, he is seen in his school uniform, and during other times, he wears simple t-shirts and jeans. He doesn’t really care about fashion, so his clothes are just arbitrary choices that he makes with all the bland options that he has. Throughout his school life, he is either dozing off al the time or acting exhausted with his eyes open. He does not care about anything that’s going on around him and prefers to be in his own dreamy world where he can rest endlessly.

Because of how laid back and disdained he is, he often relies on his family and friends to get his work done for him. The only thing he cares about is the fact that he does not care about anything at all, and though he puts the bare minimum efforts into most things, he shows immense dedication towards sustaining his lazy lifestyle. He is also quite naive about the most basic things and even ends up embarrassing himself for no reason. There are times when he truly seems to be self-centered, but he really cares about his best friend Oota. Unlike most people, he desires a very simple peaceful life.