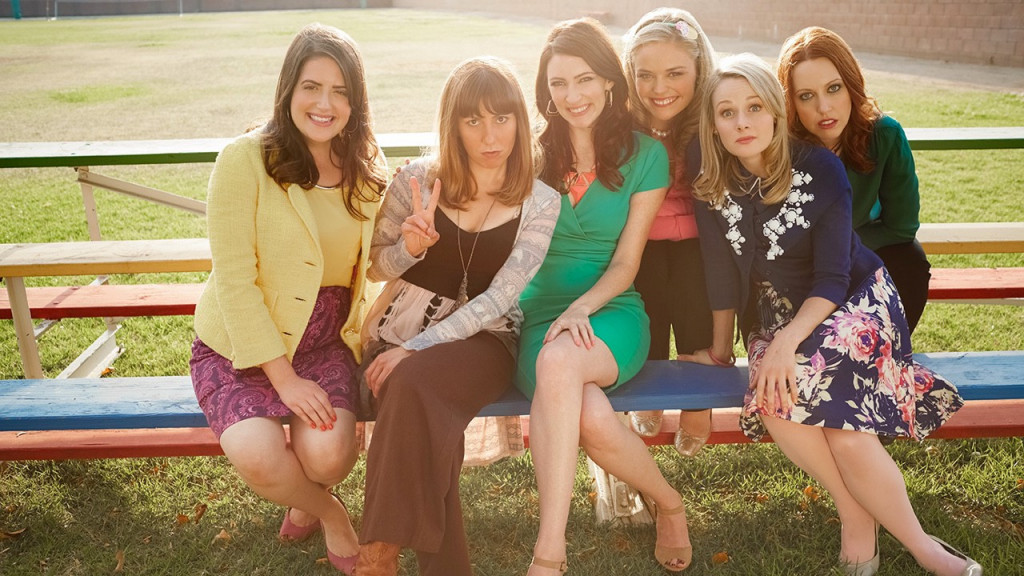 ‘Teachers’ is an American television sitcom that airs on TV Land. It premiered for the first time on January 13, 2016. The show is based on a web series which goes by the same name and is created by the improv group, ‘The Katydids’. They are called this, because all members in the group, coincidentally, have their first names taken from the root name, Katherine. This comedy–drama follows the lives of six teachers at the Fillmore Elementary School in the Chicago area, who try to mold young minds while at the same time trying to get their lives together. The show has been written by the six members of the group as well. Martel & Roberts Productions and TV Land Original Productions are the companies backing the show which has a single camera setup. Apart from ‘The Katydids’ themselves, Alison Brie, Ian Roberts, Jay Martel, Matt Miller, Matt Abramson, David Brixton, Alex Fendrich, PJ Fishwick, and Jill Cargerman are on board as executive producers.

Fans might be interested to know that ‘Teachers’ was initially conceived of as webisodes and has Matt Miller helming the series. The show is loved by fans and has garnered positive reviews from critics as well, who note, that it has had trouble transitioning from web series to television, but has made its mark with the humor that it brings.

Teachers Cast: Who’s in it?

The main cast of ‘Teachers’ star all the members of ‘The Katydids’ including Caitlin Barlow who plays the role of Cecilia Cannon, a liberal individual and the art teacher of the school. She is often seen rallying others to join protests or social causes. Katy Colloton appears as Chelsea Snap, a narcissistic teacher very self-absorbed and concerned about her looks. As is the tendency of narcissistic people who seek validation, she also sleeps around a lot. Cate Freedman plays Anna Jane “AJ” Feldman. She is quite a lazy teacher who often refers to using a variety of drugs. Not the ideal person to handle kids anyway, her classes are often out of control. Kate Lambert plays the role of Caroline Watson, a more or less competent teacher. However, she is a hopeless romantic, which often meddles with her competence and causes her to lose perspective. Katie O’Brien appears as Mary Louise Bennigan, an extremely conservative and religious teacher, who is also somewhat naive. Opposites do seem to attract, as she considers Chelsea to be her best friend and puts her on a pedestal. Of course, this might have something to do with the fact that her own repressed urges are to lead a life akin to Chelsea’s. Kathryn Renée Thomas plays Deb Adler, an angry and antisocial teacher. Her temperament suits her teaching condition since she teaches in a separate outbuilding, due to a problem of overcrowding. This is bolstered by the presence of a strong supporting cast.

If there is an upcoming season, the teachers would all definitely return and we hope to see new faces being added to the school they teach at since it is bound to make things more interesting, as well as humorous.

Read More in TV Preview: Living With Yourself | The Last O.G.

Teachers Plot: What is it about?

The plot of ‘Teachers’ is about six teachers who teach at Fillmore Elementary School in the Chicago area, trying to get their lives together and mold young minds. The perspective taken is hilarious, as each of the teachers has their own sets of problems. However, tackling those have to be the last thing on their minds as they set about to try and help the kids who are bound to be the future of society. The ensemble cast struggles personally, and this spills over into their professional lives, as the six teachers, who are very different from what one imagines textbook elementary school teachers to be like, try and navigate work and life.

The results are hysterical as the show quickly settles about ensuring that the audiences get a feel for displaced and hilarious messiness that lies beneath the veneer of the stereotypically sweet school teacher. Thus the show also succeeds in battling and defying said stereotypes, and they do not hold back or tone down on the content, making it a laugh riot. All the characters bring strong comedic performances, making and audiences will immediately feel at home as they relate to each of the teachers, who are just trying to do a good job while holding things together in their own lives. The Hollywood Reporter aptly summarized the show, praising it and saying, “The series deftly juggles the narrative elements of the simple episode arcs (picture day, anti-bullying campaign, superintendent school inspection, etc.) with a plethora of searing one-liners exchanged among themselves, with the students or with Principal Pearson (Tim Bagley). It immediately has a loose, lived-in feel that some sitcoms take multiple episodes to achieve (if they ever get the balance right).”

Hopefully, if there is an upcoming season, we will get to know these teachers more intimately as the show takes us along on a journey of their lives which is full of problems, emotions, and laughter, with laughter predominating.

Teachers Season 4 Release Date: When will it premiere?

‘Teachers’ Season 3 premiered on June 5, 2018. For fans who were hoping for a Season 4, we have some bad news. According to reports from Deadline, The Viacom network announced that the show stood canceled, after the second half of Season 3 premiered on January 15, 2019. While this leaves TV Land with no originally scripted shows of its own, the bigger question fans must have is whether there is any chance of ‘Teachers’ returning. For the time being there is none, unless some other network or streaming site picks it up. This might eventually happen, considering the show did enjoy a pretty successful three-season run on TV Land.

‘Teachers’ Season 4 does not have a trailer since the network canceled the show. However, you can check out the trailer for Season 3 here to understand what a hilarious show it is.